All roads led to Aljeref village, in Roseries locality in Sudan’s Blue Nile state. Smallholder farmers came together on 30 October 2019 for what has become an annual tradition - to celebrate the agriculture development project in their state. The project, which has been funded through a 5.5 million euros grant from the European Union and implemented since 2015 by World Vision and Charity Organization for Rehabilitation and Development (CORD), was praised for establishing strong links between farmers and the private sector.

The celebration was an opportunity to highlight, among other things, the successes of the project, the challenges, the lessons learnt as well as strategies to ensure its continuity and sustainability beyond the end of the implementation period.

Present at the celebrations was the Governor of Blue Nile state, line ministries representatives including the minister of Productivity and Natural Resources, the Director General of the Central Bank of Sudan, the commissioner for Humanitarian Aid Commission (HAC) in Blue Nile and representatives from several humanitarian organisations.

The governor appreciated the generous donation from the EU, noting that he had learnt how the project had equipped farmers to adopt a mechanised form of farming, which had resulted in increased sorghum production. “We hope to see more development projects here in Blue Nile state,” he remarked.

At least 100 smallholder farmers who had been part of the project attended the event to give their testimonies of how the project had transformed their productivity.

One of the farmers at the celebrations was 62-year-old Al Doow Mohammed, who has been a part of the project since 2015. Al Doow anticipated to harvest 120 bags (of 50 kilogrammes) up from 75 bags in 2018 from his piece of land.

Al Doow (pictured below), a father of seven children, was optimistic that the project had not only impacted the direct beneficiaries, but also those not targeted. Just before the celebrations, Al Doow took the World Vision team to his farm location to witness the threshing process.

Before, farmers threshed the sorghum manually. For Al Doow, threshing two to three bags of sorghum took the whole day. But with the thresher, the team observed how in slightly over five minutes two bags had been filled with sorghum, and ready to go, at a cost of about 10 Sudanese Pounds (less than half USD) per bag.

According to World Vision's Catherine Marangu, country programme manager and supporting the project for Sudan, what has been remarkable about this project is the increase in the sorghum production recorded by the farmers.

“In 2016 for example, in some locations we had a farmer who started off with seven sacks, and by 2018 they had increased their yields to 37 sacks,” she noted. “This resulted in improved income for farmers."

Al Doow added, “The increase in the sorghum yields enabled us to sell part of the harvests, which earned us extra income to meet the needs in our households, such as education for the children, and health."

The project was praised for supporting the farmers in establishing strong links with the private sector, that is, the contracted services company, and financial institutions, who have been an integral part of the project, enabling the farmers to finance the mechanised services being offered.

Abulbagi Babiker, the manager for Blue Nile Microfinance Institution (BNMI) noted that the project had thus paved the way for farmers, financial institutions and the private sector to reconsider investing in mechanised farming. 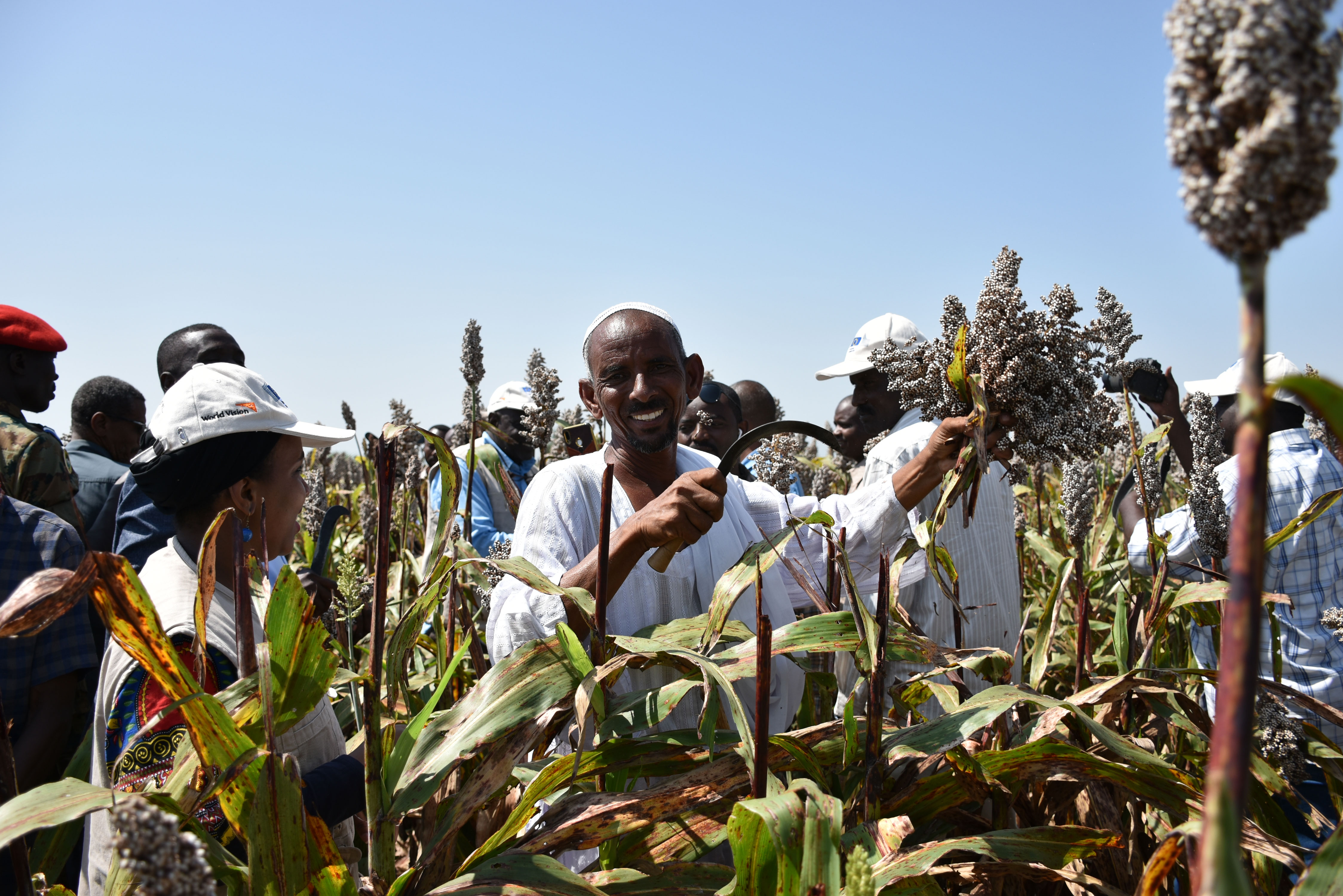 According to Marangu, plans were already underway to ensure sustainability. This included mobilising farmers into associations and training them. Through these associations the farmers could secure funding to finance their farming.

In 2019, at least 1,200 farmers were mobilised in associations and were supported financially through the Ibdaa Bank and Microfinance Institution in Blue Nile, a means through which the farmers were able to finance their part of the project’s contribution for the 2019 farming season.

“We hope that through these organised structures, farmers will continue to access the services that were being offered under the project," Marangu noted.

The European Union has also donated a set of machinery that will be distributed to the farmers organised into associations. The machinery will include tractors, planters, sprayers, trailers, water tanks and fuel tanks.

World Vision implemented this project with Charity Organization for Rehabilitation and Development (CORD), a national NGO. Sayed al Khatib, the Country Director, stressed the need to support the farmers in accessing markets - one of the main challenges highlighted by the farmers - that would see them fetch favourable prices for their sorghum so that the farmers would not be discouraged to continue with the mechanised farming.

The commissioner of HAC in Blue Nile observed that the increase in yields was evidence that the approaches adopted in the project were effective and efficient.

More than 3,000 smallholder farmers were targeted under the project across three localities: Tadamon, Roseries and Wad al Mahi in Blue Nile state, in southeast Sudan. Contribution from the farmers was an integral part of the way the project was designed.

Learn more about our work in food security and livelihoods in Sudan.