South Darfur- Representatives from the embassies of Britain, Sweden and Switzerland, as well as the United Nations Development Programme (UNDP) Sudan visited the cohesion project in Katilya and Edfursan localities, to witness how peaceful co-existence is being promoted among different neighbouring communities previously involved in disputes largely driven by competition over land and water.

While meeting community leaders and members, including youth and women, the Counselor of Humanitarian Affairs and Development Jean Francois from the Switzerland Embassy in Khartoum expressed how inspired he was to see different ethnic groups gathering together to welcome the group.

“It is positive to see peaceful coexistence between different ethnic groups today which means to us that the project is going well,” Francois observed.

The two localities have witnessed violent ethnic clashes largely driven by the competition over natural resources. For example, in 2013, Haraza village in Katilya locality, inhabited by seven different tribes, witnessed violent conflict between the different ethnic groups who were fighting over farming and grazing lands, and water.

This resulted in, among other things, the displacement of populations from the area, loss of livelihoods, and facilities such as schools extensively damaged,” explained Haj Mohammed, representative of the Local Peace and Reconciliation Committee. Mohammed adds that, trade was also severely disrupted, as the clashes went as far as leading to the closure of the road that connects the two localities.

According to Mohammed, residents started to slowly return to the village in 2015.

The community cohesion project is being implemented within the framework of the UNDP’s Darfur Community Peace and Stability Fund (DCPSF) in two areas, that is Edfursan and Katyla localities, about 90 kilometres south of Nyala, the capital of South Darfur state.

The DCPSF was launched by the UNDP in 2007 to help communities in Darfur rebuild and strengthen Community-based Reconciliation Mechanisms (CBRMs). CBRMs is composed of the local administration, religious leaders, women and youth representatives, as well as representation from the different ethnic groups.

CBRMs are instrumental in leading reconciliation efforts, and resolving disputes in the communities. They are also involved in developing and disseminating messages of peaceful coexistence through local institutions as mosques, schools, youth and women’s centres.

Their involvement in the demarcation of the Migratory Routes (MRs) in particular has been crucial in reducing tension between the farmers and herders, and fostering their peaceful co-existence, as well as among different groups in the two localities.

CBRMs also provide livelihoods support to communities in an effort to bring them together. They also promote effective natural resource management among communities and establish social centres like market places, and women and children centres that are shared by different communities.

In Haraza for example, World Vision has supported the construction of market stalls to encourage trading between the different groups, a women’s and children’s centre, and has also constructed and equipped a veterinary clinic.

Mohammed Abdullah, the Omda (Chief) of Haraza observed that the construction of the new market centres have brought different ethnic communities closer together as they now share these facilities. “People who were fighting yesterday, now meet on daily basis, at the market place, to exchange goods,” Abdulla noted.

He affirmed the community leadership’s commitment to sustaining the peace-building mechanisms that were facilitated by World Vision and other humanitarian actors.

This commitment has gone as far as establishing a local security council, responsible for monitoring the security situation in the village. He shared that no serious cases of tribal disputes have been reported since 2018, and further appealed for continued support to establish more facilities for the community such as better infrastructure.

The youth in Haraza also got inspired and they established a football team that gathers players from all the tribes in the area. 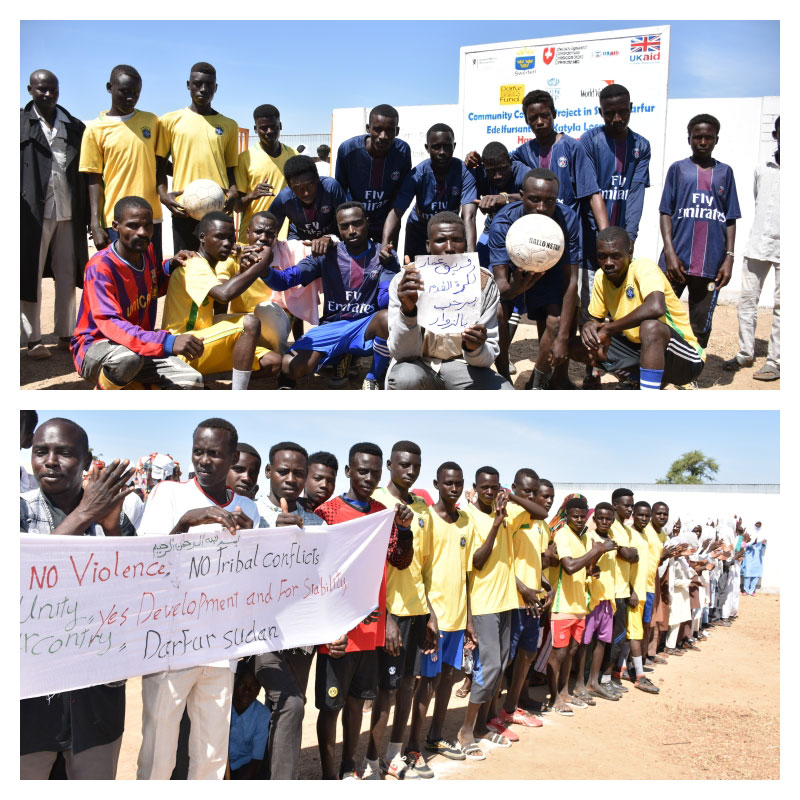 Jamal Yousif, the HAC Commissioner for South Darfur, challenged community members and leaders in the two localities, to sustain the current peaceful co-existence they enjoyed in order to move forward, now that they were more aware that peace is a key factor to achieving development in the region.

World Vision has also pioneered the concept of Village Saving and Loan Associations (VSLAs), through which different groups come together to save, and acquire credit to secure income generating activities, or take care of family emergencies.

More about the community cohesion project

The project is funded by the governments of Britain, Norway Sweden, Switzerland, and United States through UNDP Sudan.

World Vision launched the project in February 2018 in partnership with a national non-governmental organisation called Alshrooq, aiming to enhance peace-building efforts in the Darfur region.

According to World Vision’s Alex Musili, faith leaders in particular, play a critical role in fostering and sustaining peace, for instance through using their platforms such as the mosques to preach a culture of peace and tolerance.

The project runs until January 2020.