From 2017, community health volunteers assisted a total of 9,915 children under five years old suffering from the three major killer childhood illnesses (malaria, diarrhea and pneumonia). A total of 105 cases were referred to health facilities where they were aptly treated including 55 children who have severe malnutrition. Since these volunteers, or most popularly known as community-based distributors or CBDs, started working with World Vision, no deaths were reported in community.

The people were so satisfied with their work that they call them community doctors.

Chumadi Payam in Renk County is remotely located for about 45 kilometers west of the nearest town. Its health service is weak with very few qualified personnel to deliver essential health care services to the most vulnerable population which include its residents, the internally displaced persons and returnees). Its total population is estimated at 7,086 inhabitants. 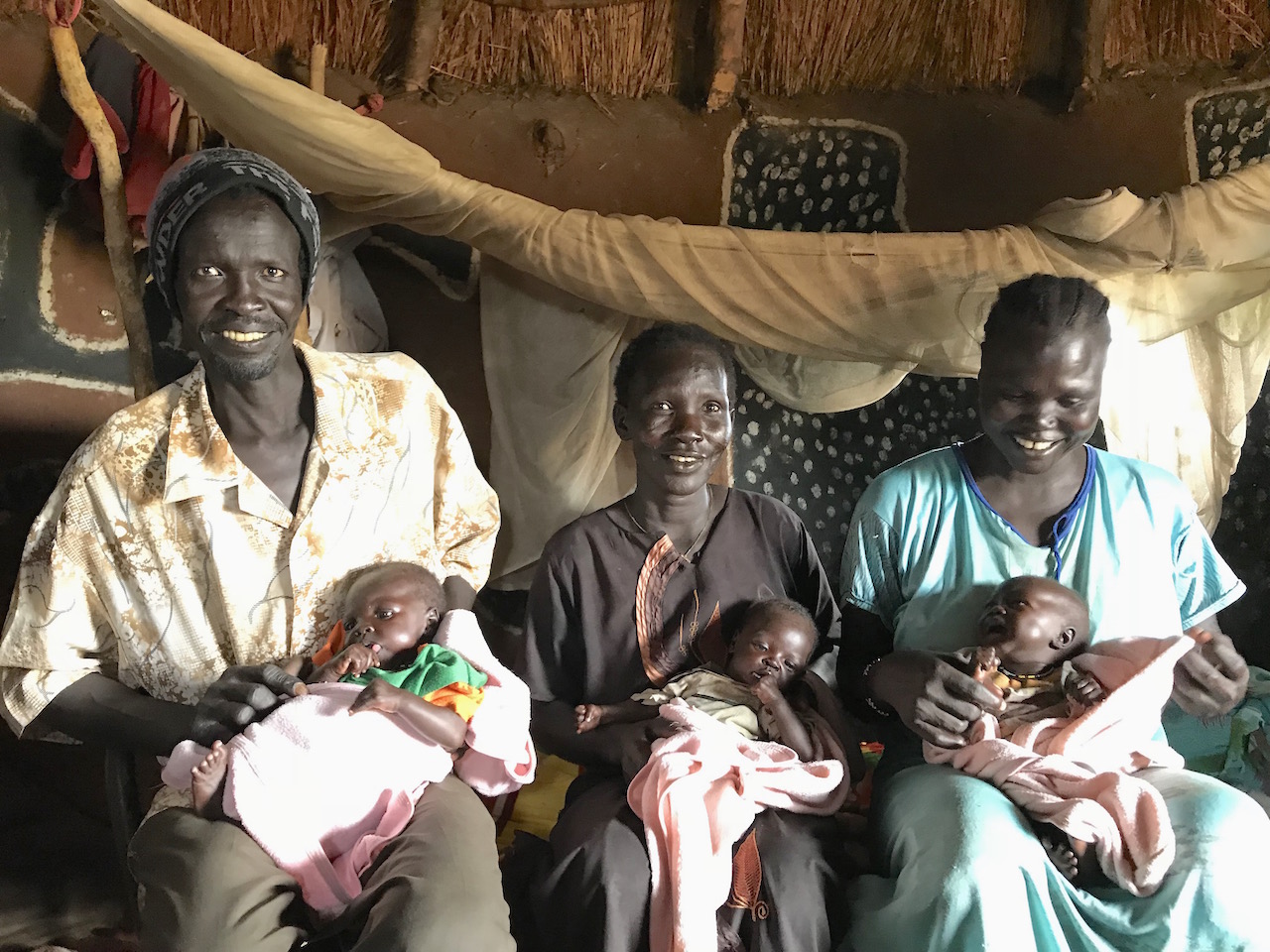 Tirab, 35, is a mother of nine children, two of whom died when their house caught fire. She is so thankful of the CBDs who assisted her from pregnancy to the delivery of the triplets. She said the entire community has benefited from these volunteers that World Vision trained.

Having assessed the need, World Vision partnered with the State Ministry of Health to train 102 community health volunteers, 30 of them were from Chemmedi. They visit households and deliver health to children less than five years. Their main focus is to monitor the three major illnesses in children below five years old.

Malaria, diarrhea and pneumonia are estimated to account for up to 5.2 million deaths a year globally in children below five years.

Apart from delivering treatment to children below five years, the women also share health messages on disease prevention and control, identification and referral of children with danger signs (severely ill) from the community to health facilities for senior care. They follow up on pregnant women to go for antenatal, postnatal and delivery at health facility and also mobilize mothers and caretakers to take children for immunization in the clinics. 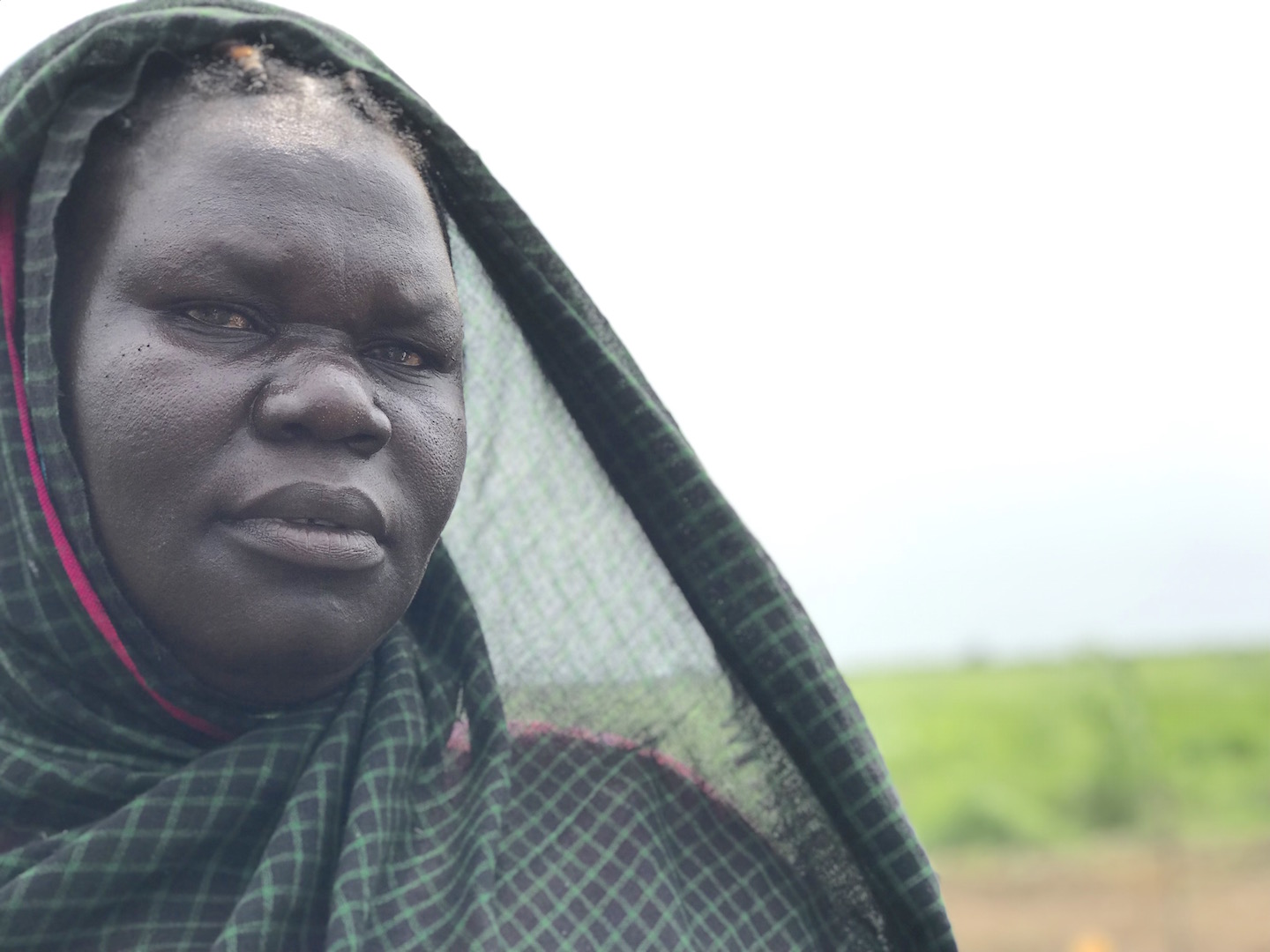 Susan, one of the CBDs, shared how her life has changed when she got trained by World Vision to be part of the program. She said she is also amazed what she is capable of and proud she is helping people, especially the women and children in the communities.

In the past year that World Vision implemented this program, the Integrated Community Case Management, a significant change was noted in the number of children being seen in the clinics. Interviews with inhabitants of Chemmedi and our own health facility records show that the number of children below five being assisted by the CBDs have increased and those visiting clinics have decreased drastically.

Seventy-five percent of children below five years treated in our health programs in the county are treated by CBDs and only 25-27% are seen in the clinics. This means more children access health care faster because CBDs are readily available at the community.

Isa Mohamed, 33 years old, was among those who were trained by World Vision as a CBD. Isa says, “Using the acquired skills I gained from my training, I am successfully supporting my community by helping treat children suffering from malaria, diarrhoea and pneumonia. I refer the more complicated cases for help to the health facility such as immunization and pregnant mothers for maternal services. I find happiness in diseminating health messages to my community, mobilize them on promoting hygiene and sanitation.” 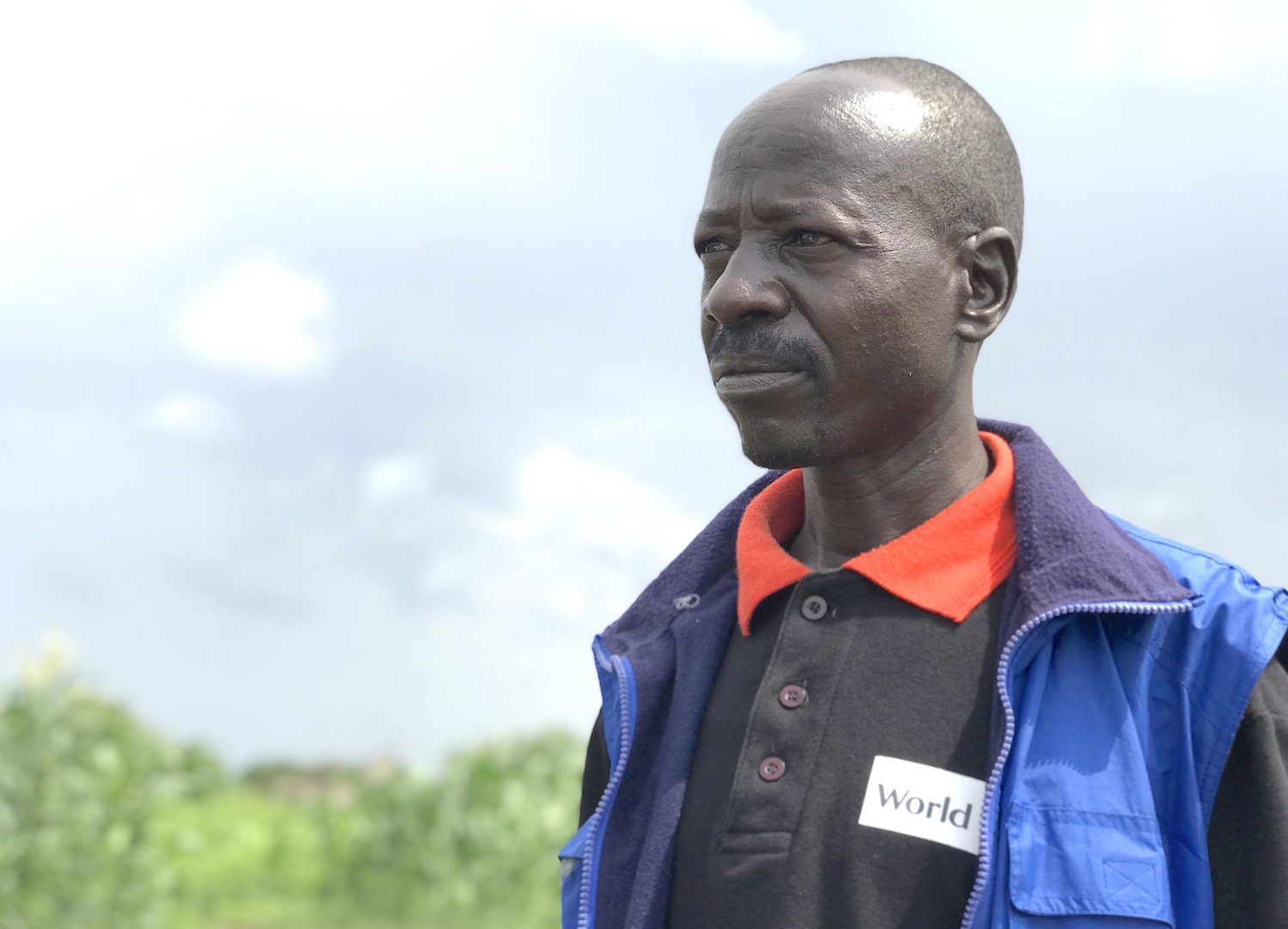 Isa said World Vision made him realize what he is capable of. He has learned to identify diseases and how to provide support to his fellow villagers. By helping Tirab, he was able to ensure the survival of the triplets. The people in the community look up to him as their source of strength and support. His dream is for all the children to be healthy and free of diseases.

She adds, “I have one particular case that makes me really proud. Tirab Daba is a 35-year old mother and my neighbor. I have been monitoring her condition when she was about three months pregnant until delivery. I advised Tirab on importance of antenatal care and accompanied her during her first visit for check up. In the morning of 10th June 2018, I noted she looked very weak. I took her to health facility and the community midwfe called Aluk examined her. She told us her babies were sound and we returned home.” 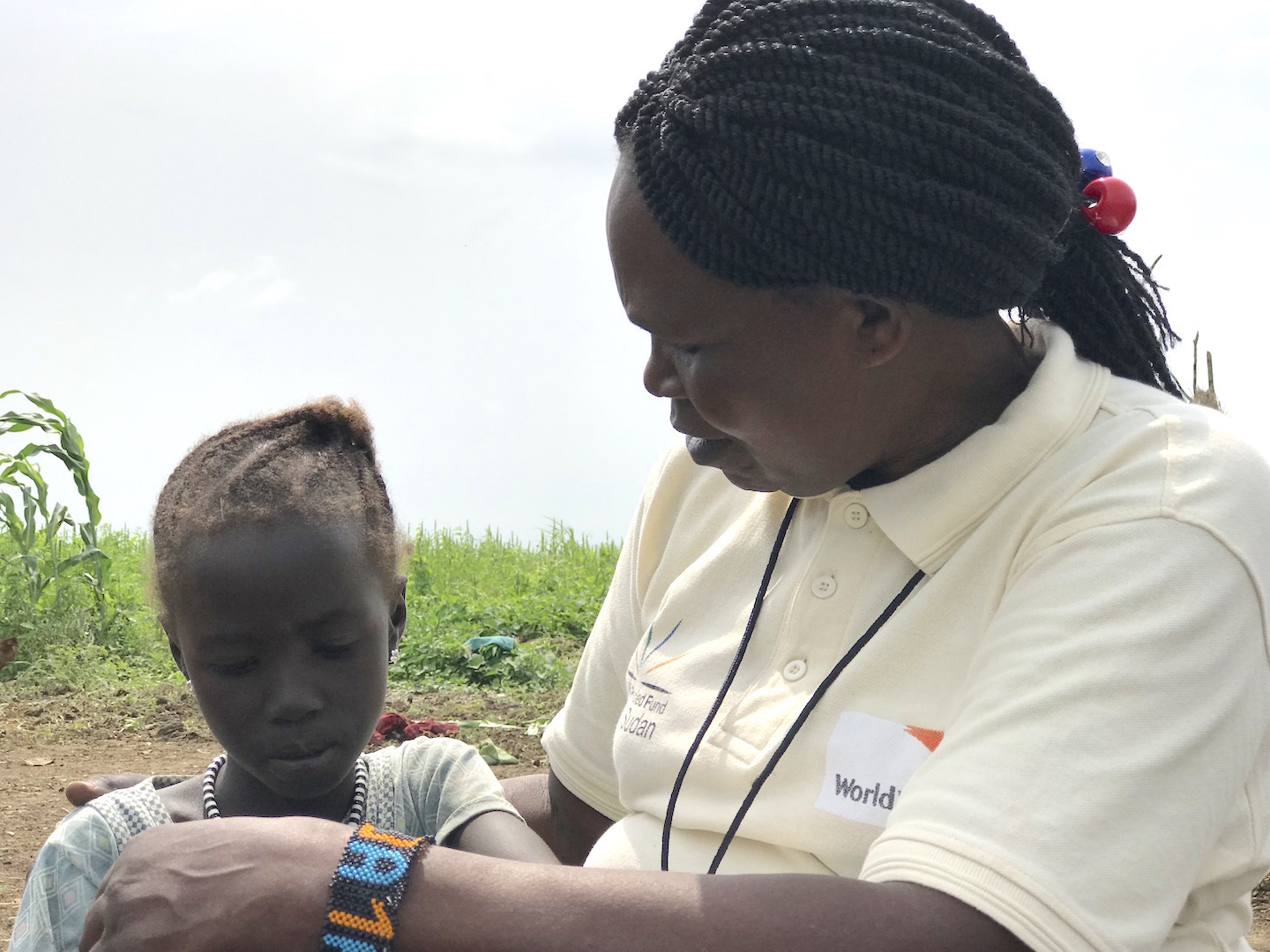 Rose, World Vision's programme officer, talks to 8-year old Sarah. With her able leadership and guidance on the volunteers, Rose was able to prove once again that the communities, with enough support, have a lot of potential to take the lead in finding solutions to their own health issues and needs.

Isa said Tirab started having sharp pains on her back and lower abdomen so she accompanied her back to the health facility but found it closed because it does not operate on a 24 hour basis. They returned home and I then called a traditional birth attendant to assist her.  At 10:00pm Tirab Daba gave birth to triplets, all girls.

‘Thanks be to  for the safe delivery of Tirab and also to World Vivion who made me what I am today I am able to understand about health care, things that I was not aware of before. The mother and babies were all sound and healthy. But because I feared that Tirab and her newborns might develop complications having delivered triplets, I called Rose Achan in Renk who is also a midwife by profession to come and confirm the safety of both”, Isa continues.

Tirab was very thankful of the support she got. “I have eight children, three boys and five girls. But two died when our house caught fire last year. I sustained serious injuries on my left arm. These three babies are now my 9th pregnancy. Isa and Rose helped me survive delivering the triplets. I am glad there is a CBD in the village or else the babies will be at risk”, Tirab says. 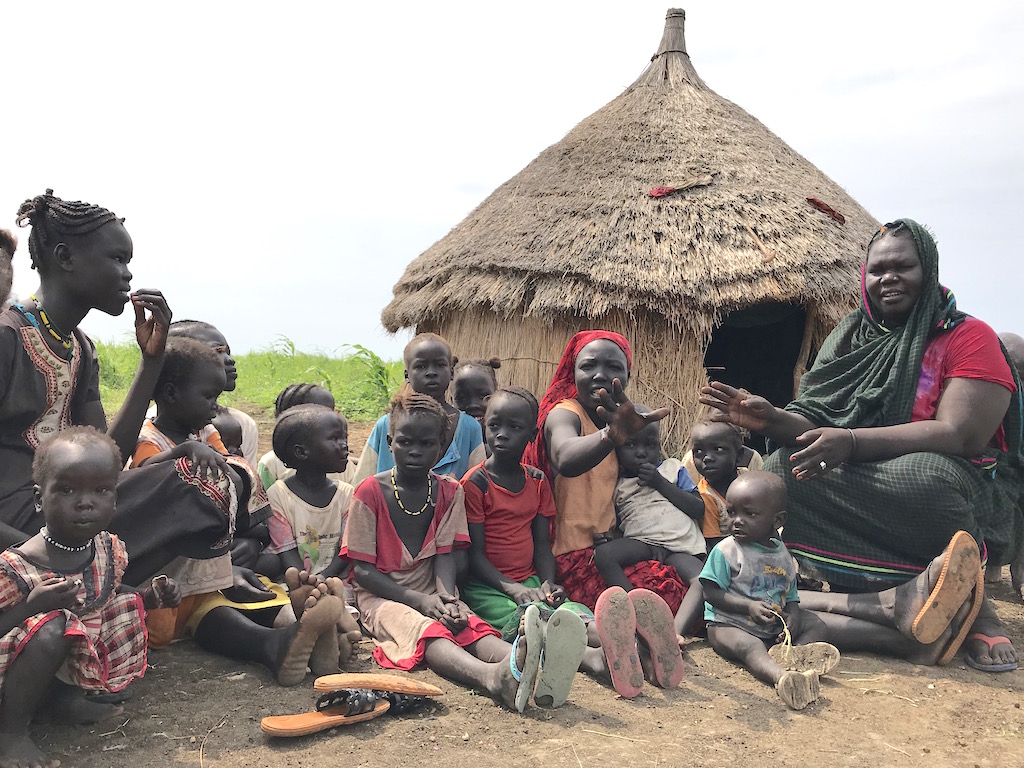 Susan with the mothers and children in the village. The program brought the community closer together by becoming their own sources of support in time of need.

World Vision’s Programme Officer Rose Achan who is based in Renk has lauded the positive impact of the volunteers in the communities. “They have worked hard and are very committed to their support. They have filled in the massive need of health care in remote areas that can hardly be reached by health services. I can only salute them for their unwavering contribution to better the lives of our own contrymen.”