Badghis Province, Afghanistan, is a region where traditional values prevail. In a challenging context in which female social activities are still discouraged and characterised as strange and inappropriate, a group of 20 women have started a local business of baking and selling homemade bread.

In Badghis, simply being a woman is enough to confine you in your home, invisible and forgotten, the main reason for your existence being to bear children. Because of your gender, you are restricted by religion, culture and tradition. You are weak and vulnerable, unable to make decisions because you are seen as unwise. Almost seven out of ten income earners in Afghanistan are men, reflecting strong gender based differentials in labour force participation. Socio-cultural beliefs cast women working outside the home as being unnecessary; but even worse, for if a woman does so it means she is a “bad” woman.

Through a project funded by the Australian Government, Department of Foreign Affairs and Trade (DFAT), World Vision Afghanistan established 98 producer groups in 2016 to equip women to carry out income generation activities such as beekeeping, vegetable cultivation and raising poultry. Further training is provided to them for forming savings groups to subsequently learn how to save money for specific purposes such as starting a new business and to work towards financial independence.

Noticing the success of their producer groups in poultry rearing and egg selling, 20 women formed a saving group to manage their combined income. They managed to save US$300 in 10 months – an amount over six times the average annual income (US$45) of an Afghan woman according to the National Life Skills Status Survey conducted in 2015.  With these savings, the women then started to think about starting a small business initiative within their village.

We had a lot of business ideas, but we had to consider the amount of our savings, the potential for business, as well as if the community would accept such a venture.

‘We had a lot of business ideas, but we had to consider the amount of our savings, the potential for business, as well as if the community would accept such a venture’, says Sara – a cashier for the savings group. Through the guidance of World Vision Afghanistan project staff, the saving group members decided on a business where bread could be baked at home according to local cultural norms. Convenience was also a factor and the potential market demand for homemade bread was considered high.

To bake local bread, a tandoor [traditional oven] was required. Rather than spending a large proportion of their savings on an oven, the women chose an innovative option – making the tandoor themselves from local clay and other materials, shaping the oven with their own hands.

But who would bake the bread on a daily basis, given they could only afford making one tandoor? They made the decision to select Donyagul, a very poor woman who was not even a member of their savings group in order to help her establish a much needed income stream for her family by enjoying a share of the profits.

When all was ready to open the bakery, the women recognised the importance of making their new venture known to potential buyers. With support from World Vision Afghanstan, the women held an inauguration event, inviting their fellow villagers, Provincial Council and Governor Representatives, and the Director of the Department of Women’s Affairs (DoWA).

‘Today, I am pleased to be a part of this inauguration of a new venture supported by WVA and made possible by this group of women. These efforts and initiatives will make our women self-sufficient and a role model for other women who have otherwise seen only the four walls of their home’, says Zarquan Shirzad, the director of DoWA. ‘I, in turn, on behalf of these women will advocate to other agencies to request them to buy their required bread from these women.’ 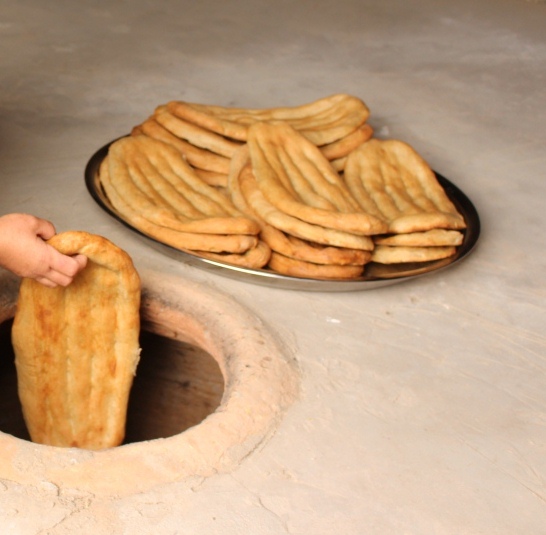 Seeking to make even further inroads into the market, these women didn’t stop at a household bakery however. As a part of the marketing component of their business, the women also established a booth in Qala-i-naw city where Donyagul could sell the bread, not only to members of her own village, but to those living in the city as well.

One week after expanding the business, Donyagul and members of the saving group decided to hire two additional female assistants to help with baking and sales, as the demand and duties could no longer be met by one person alone. ‘We had no idea that we would receive such a lot of orders’, Sara says with a smile.  ’We thought Donyagul could manage all the orders on her own!’

“I am collecting my money to send my daughter to English class. She wants to learn a new language.”

Today, the bakery is thriving and the saving group members are making a minimum of US$9 per day. In order to manage their income and reinvest some of it into the business, the women have decided to calculate their income and expenditures at the end of each month. ‘After the reduction of the expenditures’, Sara says, ‘[the saving group] gets 50 per cent of the profit, while the other 50 per cent is given to Donyagul’ to benefit her family. “I am collecting my money to send my daughter to English class. She wants to learn a new language.” Donyagul says with pride.

World Vision Afghanistan has begun negotiations with national and government merchants and companies in order to find opportunities to expand these types of women-run small businesses. According to Tariq, World Vision Afghanistan’s Marketing Specialist for the project, ‘We had discussions with the Badghis prison to initiate a contract with the department and the saving group members. If this is achieved, the women’s income will more than double, increasing to a minimum of US$22 per day by baking bread for the prison.’

Such success and learning from the DFAT grant funded project has now been incorporated into World Vision Afganistan’s first and recently established Area Integrated Programme in Badghis funded by World Vision Korea and Hong Kong, greatly increasing the scale up potential of what began as one small women-owned business in one remote village where no one ever thought the smell of homemade bread could go so far.