The sorghum in South Sudan is tall in September. Even the tallest Dinka, a tribe known for their height, disappear when walking through the fields that are ready for harvest.

But the height of the stems, the deep green of the leaves and the plump ears are deceiving. “This will last three, maybe four months,” says Awel Adang as she sits in the yard of her home surrounded by her six children.

Her words reflect the struggle of millions of South Sudanese. Even when they have food, it isn’t enough. According to a national food security report (IPC Report) released in October 3.9 million people across the country are ‘food insecure’ or, simply put, don’t have enough to eat.

“We had some rain, but it was late and it wasn’t enough."

Sorghum is a staple for most South Sudanese. The two main dishes prepared from it are akoop, which is similar to Lebanese cous cous, and kisra, a delicate flatbread. Adang is preparing akoop. She strips the sorghum seeds from their stalks.

“We had some rain, but it was late and it wasn’t enough,” says Adang.

Adang lives in Warrap state in the Northwest of South Sudan, near the disputed border area of Abyei. In Warrap, you can drive for hours passing a home like Adang’s every few minutes. Without speaking to people or knowing exactly how much food there is in South Sudan, it would be easy to think that there is an abundance of food. But there isn’t.

In fact 80 percent more people are food insecure than at the same time last year.

Adang’s husband, Atem, sits a few feet away with some of the best heads of sorghum at his feet. He ties the stalks together expertly before hanging them from a rail in the sun to dry. These are for next season’s harvest.

As difficult as their situation is, it is better than many others in the country. Those hardest hit are in conflict areas in Unity and Upper Nile states, to the east of Warrap. Here, many are balancing precariously on the verge of a catastrophe. Conflict, coupled with high food prices, erratic rainfall patterns, and limited humanitarian access have combined to produce the perfect recipe for hunger in South Sudan. 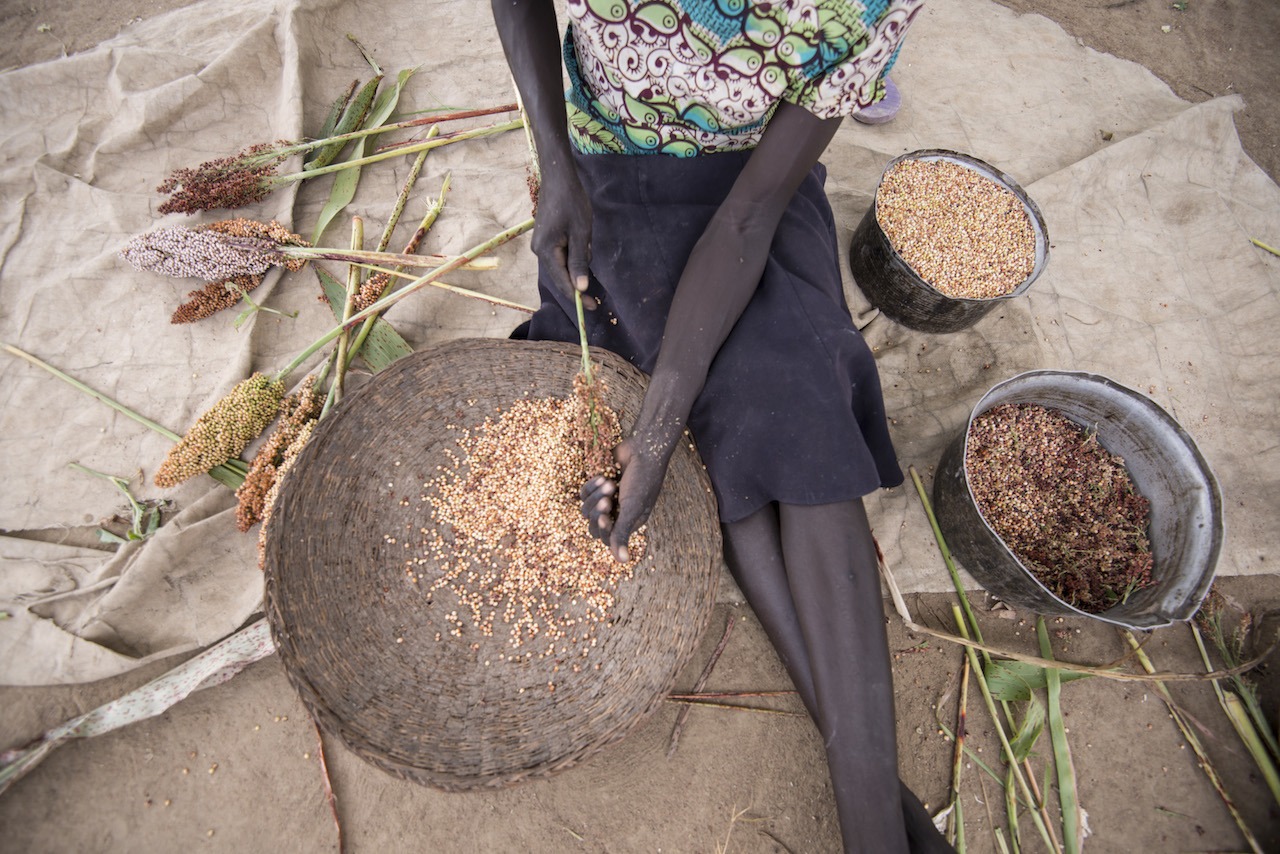 Perry Mansfield, World Vision’s National Director in South Sudan says that, “It’s not only the conflict affected areas that we are concerned about. People we meet across the country are reporting less rain and late rain. Some say that their harvest will only last a few months. Even in the Equatorian states, where food is usually abundant, South Sudanese are reporting alarmingly low harvests,” said Mansfield. “The harvest this year is lean and we don’t know how long it will last,” he said.

Adang doesn’t need a report to tell her this. She looks anxiously at her six children as she pounds the sorghum seed to separate the seeds from the husks. World Vision bears witness to Adang’s struggle and that of the millions of South Sudanese parents who struggle to feed their children. The organisation commits more resources to food than any other kind of assistance. In 2014, over 300,000 people in South Sudan received food aid from World Vision, but aid isn’t only about feeding the hungry; it’s also about making sure that they don’t get hungry at all.

Aid isn’t only about feeding the hungry; it’s also about making sure that they don’t get hungry at all.

Adang is lucky in more ways than one. World Vision has recently begun a project in her village that that will help her, Atem and other like them increase their crop yields so that they will be less vulnerable to the whims of the weather. The broad aim of the program is to help South Sudanese harvest enough food all year round so that there is no need for aid agencies to distribute food.

As Adang grinds the sorghum seed into flour he children sit around her laughing and playing. It will take her most of the day to prepare the evening meal. Later, she will mix the flour with water to make a paste. Rolling the paste into small balls, she will cook it in a stew or in milk. She also owns a few chickens and goats which supplement their diet of sorghum.

Although her family will eat well tonight, they may not be so lucky in the coming months.