It is estimated that more than 200 million young girls and women still alive today have been victims of Female Genital Mutilation (FGM). On this 6 February International Day of Zero Tolerance for FGM, World Vision reaffirms its commitment to defend the fundamental rights of girls and women.

The World Health Organisation (WHO) defines FGM as interventions that intentionally alter or injure a woman's external genitalia for non-medical reasons. FGM is most often performed on young girls between infancy and the age of 15, and is classified into four categories, detailed in an information sheet published on the WHO website.

FGM has no health benefits. On the contrary, it damages the tissues of the genitals and hinders the natural functioning of the female organism. In addition, it is rarely practiced by health professionals. Most often, traditional excisors use razor blades and scissors without anaesthetic drugs. This practice causes a high risk of infection and many obstetric risks.

In Senegal, according to the 2016 Continuous Demographic and Health Survey by the National Statistics and Demography Agency (ANSD) of Senegal, 23% of women aged 15-49 declared to have been excised; a rate that has decreased compared to 2005 when it was 28%. The percentage of girls aged 0-14 years excised is 13.6%, according to the same document.

What are the cultural beliefs behind these mutilations?

“It was done from generation to generation. If you refused, we would say that you were not respectful of social norms ", explains Coumbayel Mballo, a former excisor. “For us, FGM was an opportunity to educate girls. We organised a ceremony, the koyan, once a year in the village with usually around 20 teenagers,” Thiékédié Mballo, another former excisor, remembers. This rite of passage, abandoned with the entry into force of the 1999 law, lasted two months.

The mutilated, during their the period of healing, were locked up and subjected to punishments such as filling a basin with tears. "They were taught to submit to men," Thiékédié continues. "Now that excision is being done clandestinely on babies, this gesture no longer makes sense because the education component has been removed," she continues. “And then we were made aware. We understood that this was not a good thing".

How to fight against FGM?

World Vision's community approach and work with local teams are key success factors in supporting populations to abandon the practice of FGM. In Senegal, World Vision has worked a lot with communities in the Kolda region, particularly in its programme areas of Dabo and Velingara where almost all girls and women are still victims.

“Excision is the preserve of the grandmother, the person most influential over the mother of the child. Here, she claimed that an uncut woman was impure,” explains Oumarou Diallo, ex-agent of World Vision in Vélingara.

"From 2005 to 2010, the repressive policy of the State attempts to retrain excisors and major campaigns by NGOs did not prevent this practice from continuing," Boubacar Fofana, a World Vision child protection specialist, recalls. "Since 2009 and the establishment of a programme aimed at grandmothers, mentalities have evolved".

But change didn't happen overnight. There was a lot of convincing to be done. According to a survey carried out by the Grand Mother Project, 93% of grandmothers in the Kolda region said they were opposed to FGM in 2011, compared to 41% in 2008!

World Vision has trained many excisors in new income-generating activities, in order to encourage them abandon these ancestral practices so devastating for the health of young girls. World Vision involves grandmothers in its awareness-raising work, exerting a real influence on their granddaughters, and thus manages to reduce the number of mutilations in a sustainable way.

Between 2013 and 2018, Sister Fa and World Vision designed a unique programme of creative workshops, roadshows, forums, and concerts through which children's rights have been dramatised, taught, learned, and conveyed. A unique blend of art, music, theater, understanding, and lobbying. Cultural taboos have been tackled, understood, and creatively addressed in order to improve understanding and promote the reduction or elimination of certain violent practices such as FGM and early marriage. Since the inception of the programme, more than 20,000 people have participated in this unique approach.

“For years, women have suffered from violence due to the ignorance of our parents and yet we do not deserve this fate which goes against our fundamental rights. Dear parents, know that FGM is a practice that we must get rid of. If a child is protected, a whole people are protected” affirmed Adja, a spokesperson for a government school encouraging parents to recognise the necessary need to change attitude and behaviour towards FGM.

Another facet of the project was face-to-face discussions with key lawmakers and influencers in community forums where children's rights were expressed openly and support was sought to strengthen and ensure that these rights were upheld.

Who is Sister Fa? 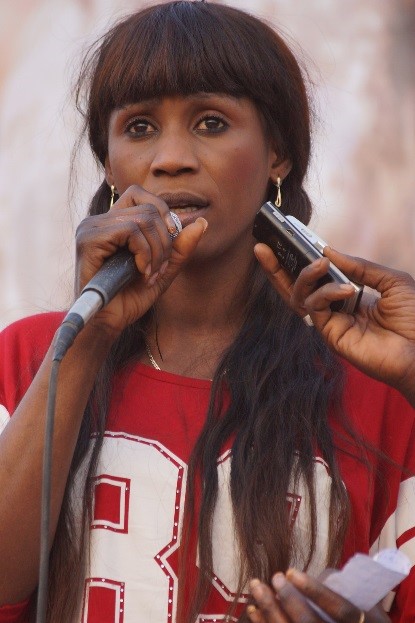 A survivor of FGM. Fatou Mandiang Diatta, aka "Sister Fa", is a Senegalese artist born in Dakar and currently residing in Berlin, Germany. She expresses her political and social commitment through music, a mixture of rap, reggae, soul, jazz, Mandingo music, and mbalax. The themes of her songs touch on politics, human rights, the living conditions of African women, FGM, unity, social welfare, and the well-being of children.

"I did not come to you to ask you to give up your traditions and customs, I am not here to bring you another civilisation, I am not here to impose a way of life on you, I am here to help you to better educate your children. I am here to discuss with you the importance of respecting the rights of children who suffer greatly in these localities and I hope that with the work we have done, we can help you protect the children who will be responsible for tomorrow ” declared Sister Fa during a touring concert in the south of Senegal in February 2017.