Fatima Hassan, 42, is one of 4,500 smallholder farmers in South Darfur who is being supported through the German Federal Ministry for Cooperation and Development (BMZ) project, implemented by World Vision, to increase their agriculture production. It is hoped that as yields increase, so will be household incomes.

Fatima is a member of a seed multiplication group, consisting of nine other farmers. They work collectively to grow sorghum, millet and groundnuts for the community's seed banks, through a concept introduced to them, called seed multiplication.

When we met Fatima in Mershing locality, north of Nyala the capital of South Darfur, she was at the group’s sorghum seeds multiplication farm. She was later joined by some of her fellow group members, 45-year-old Najm Addin and 48-year-old Sheref Mohamoud.

After that, the farmers were responsible for planting and managing the crops until harvesting. 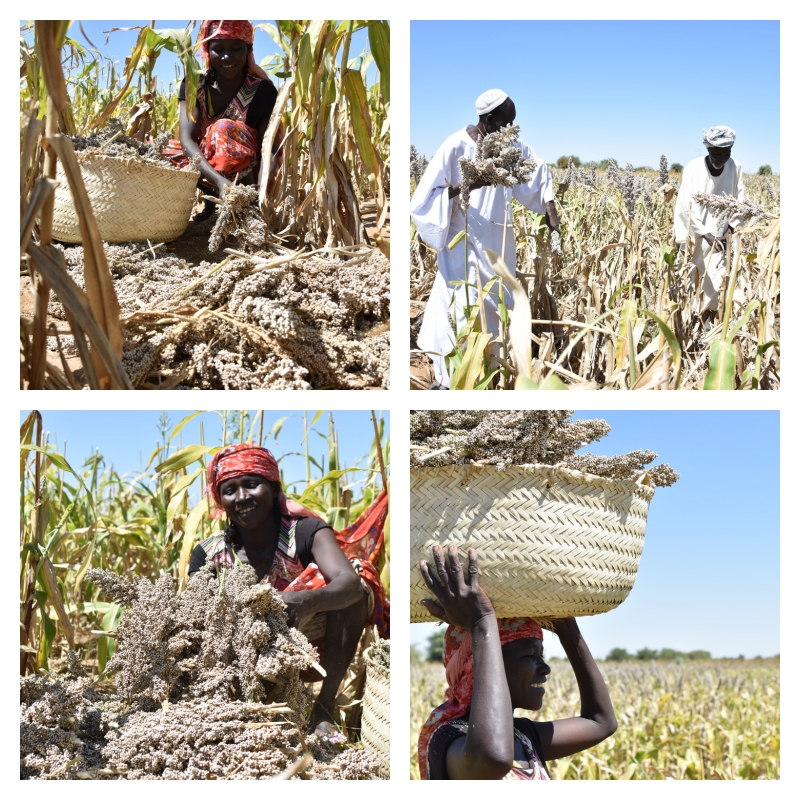 In total, 1,720 kilogrammes of improved sorghum, millet and groundnuts (staple in most households) seeds certified by the Agriculture Research Centre were distributed to the farmers.

The goal of the seed multiplication groups is that there will be a community-managed seed banking system that will be a collection point for seeds, multiplied through the group farms.

This will be achieved through the establishment of the seed banks stores. Two such stores are included as part of this project, the construction of one is already underway in one of the project locations.

Seeds collected from the multiplication farms, will then be distributed to farmers for the next planting season. It is the seed multiplication groups that are expected to continue to contribute to the stock at the seed banks.

Additionally, according to the project design, it is expected that each farmer who received the improved seeds will return at least the amount they received to the seed banks.

Beyond the group multiplication farms, each member also has their own individual farms. They all anticipate nearly the same harvests. Fatima, for example, is expecting at least 40 bags (weighing 50 kilogrammes).

Increased yields and incomes for families

As the harvests begin, Fatima and her group members anticipate a significant improvement in yields, at least 40 bags from the five feddans (about five acres), compared to the 15-25 bags she got from the previous harvest. This will be a big help, she has eight children to take care of and so farming is the family’s main source of livelihood.

With increase in production, Fatima, Sheref and Najm are hoping that they will have enough disposable income to meet their households’ needs. A bag of sorghum sells at 1,100 Sudanese Pounds (about $24 USD) in the local market, the same is true for millet, while a bag of groundnuts sells for between $15 and $20 USD.

“In the past, what I got was not enough to sell at the market, let alone enough to eat,” Fatima recalls. At a time, when the prices of staple food are rising and most households are finding it difficult to meet their food needs, Fatima says she is lucky to have reserves of food.

Sheref hopes he can buy goats so that his children can have regular supply of fresh milk. Najm, has four children in school, and therefore hopes the sales from his sorghum will boost his income so that he can meet their education expenses.

World Vision’s Paul Agunda, manager of the BMZ project in South Darfur, says this approach has the potential of reducing the dependency of community members as well as holding the promise of increasing households' food security. “The goal really is to improve the availability of high-quality seeds adapted to the area,” he adds.

According to Sheref, the techniques they are applying, such as the types of seeds used and the way farmers prepare the land for cultivation has contributed to them producing quality crops this season.

In fact, he notes, “when people pass by here, they stop to ask us how we managed to produce such a different variety of sorghum.” Ours is different in the quality, amount and even the size.”

World Vision is implementing this project in two localities in South Darfur, with the goal of building community resilience through improved crop production. It is done in partnership with other stakeholders including the national NGO (Jabel Marra Charity Organization for Rural Development), the Ministry of Product and Economic Resources, and the Agriculture Research Centre (ARC).

Learn more about our work in food security and livelihoods in Sudan.