Most of the 1,079 farmers have increased their farms’ yield by around 500 percent, an incredible bountiful harvest has once again amazed many people and leaders in the area. After practicing traditional farming for years, this bumper production coming from more than 5,395 acres of land combined from farmer who participated in the project are finally reaping rewards of their hard work. 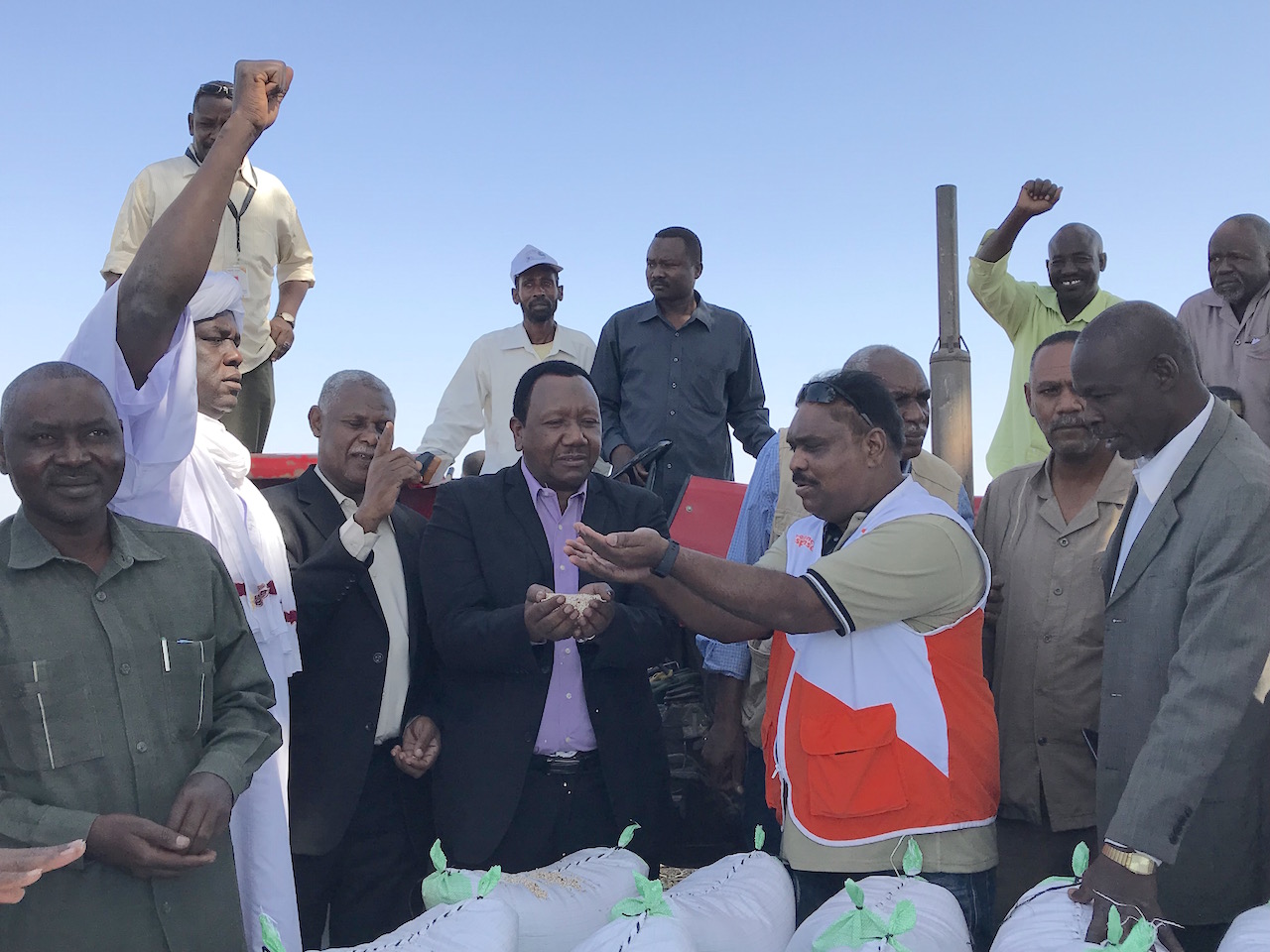 From 2-3 sacks per feddan (90 kgs), many of the farmers enjoyed an increase of 500% in production. In the photo shows (from left) Hasabo, the Head of Blue Nile Farmers' Association (in white), Reseires Commissioner, the State Deputy Governor and World Vision National Director.

The joy and pride were in their faces with most of them having increased harvest by more than 500 percent. All of the participating farmers were raving about the results. Using the traditional methods, they can only produce two to three sacks (90kg per sack) for every feddan (equivalent to an acre). Many had to get a loan to finance the expensive farm cultivation and paying workers who plant and weed the farms. Today, they use herbicides and planters making work fast and efficient. They learned the importance of organizing their work and helping each other. Using quality seeds, new methods and technology, herbicides and awareness of improved agricultural practices, farmers like 69-year old Salah Abdullah, a father of 10, have harvested 17 sacks (90 kgs) per feddan. This was unthinkable three years ago when they can hardly get three sacks per feddan. 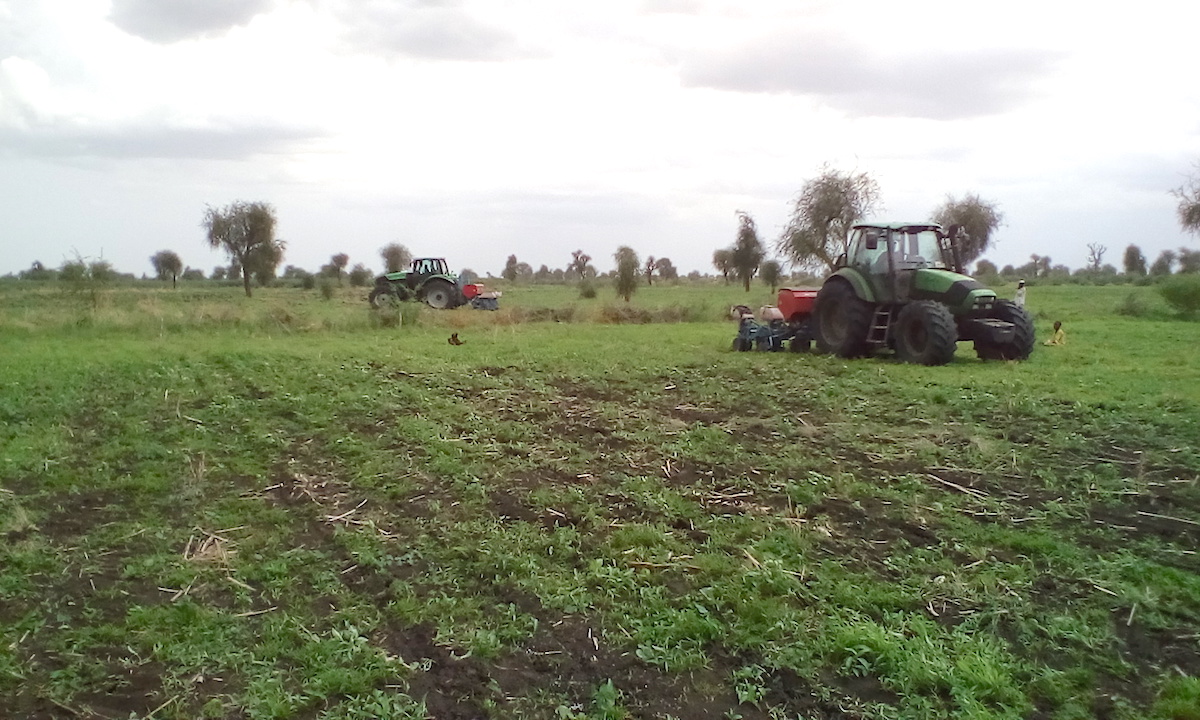 Modern technology, such as the tractor above, is now being used by the farmers for their crop production and harvest.

Abdullah was awarded as one of the three outstanding farmers for the successive three years. He says, “I talk to my fellow farmers to stop doing traditional farming. I was able to achieve the best results after I joined the project and followed what I learned from it. Learning and practicing new things changed my life as a farmer.” Ali Ibrahim, World Vision’s Blue Nile Program Coordinator, says, “Traditional farming produced poor yield. Many of them have to resort to loans to survive and provide for their families. This project gave them new hope.” This situation is gradually changing. 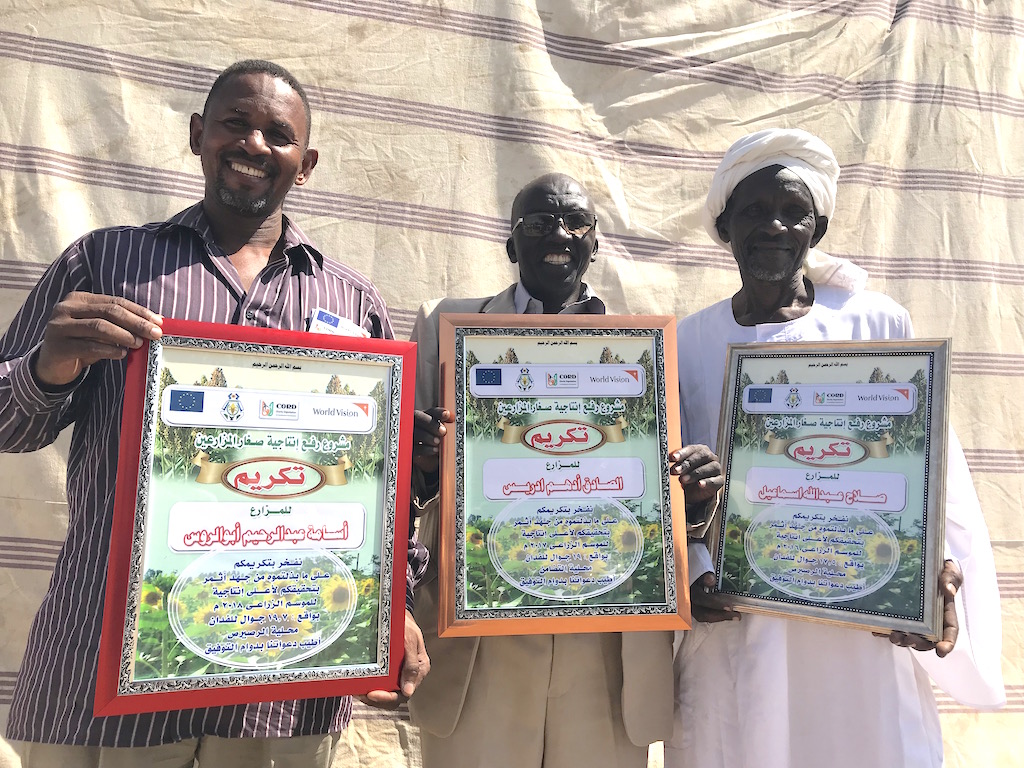 This year’s field day was graced by Deputy Governor Osman Alamin, Blue Nile State’s Minister of Agriculture Yousif Altayeb, Roseires Commissioner Abdurraman Altarifi, Tadamon Commissioner Abdul Azim Aburouf, HAC representatives, government and other partners. who all praised the farmers for their perseverance and hard work. Samoa, 33, came with her 2-year old son Basher at the field day. She said her husband is part of the project and shared her happiness that their harvest increased. “Many farmers practicing traditional farming improved the way they work because of this program. The commitment of World Vision and local partners are inspiring them. My hope is that it will expand to the rest of the seven localities in the state so everyone can benefit from good production. We are very grateful of World Vision’s commitment”, says Minister Altayeb. 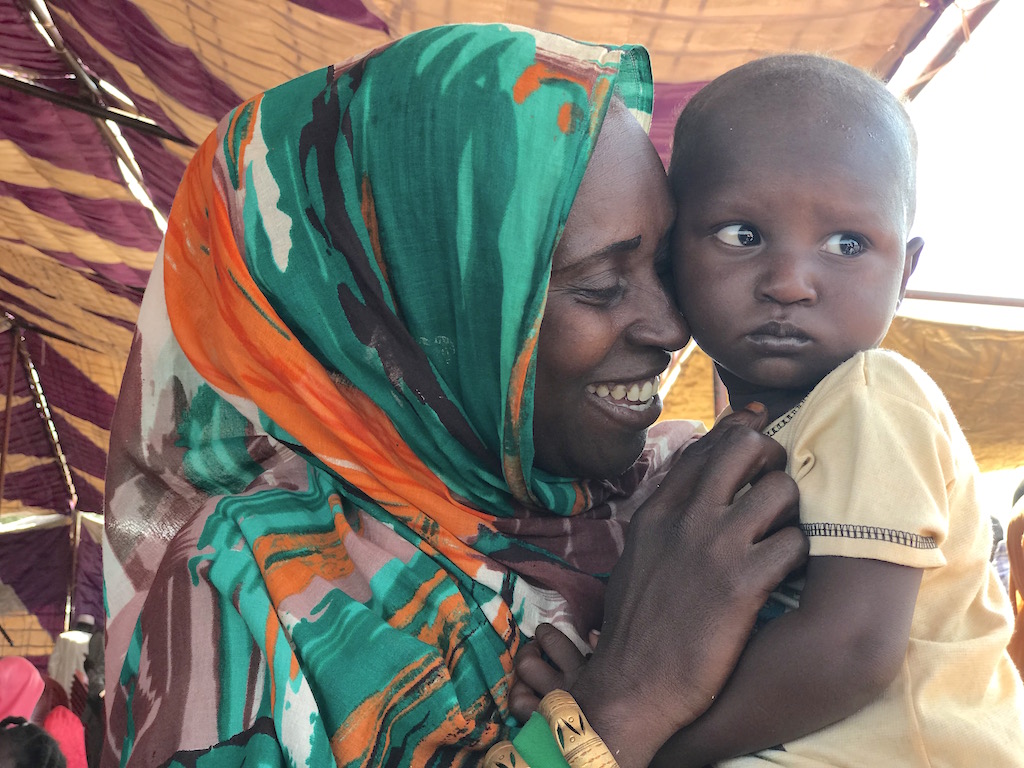 World Vision’s National Director Vince Edwards emphasized the transformation that is happening with the thousands of farmers in the state.

He says, “On the first year, I was excited. On the second year, that excitement doubled. This year, I am certain that this project is headed in the right direction towards resilience and sustainability.”

Edwards adds, “The change in mindset among the farmers was impressive. This change has brought about many opportunities for partnerships with the private sector and micro-finance institutions that can further help the farmers in ensuring sustainability of their projects.” 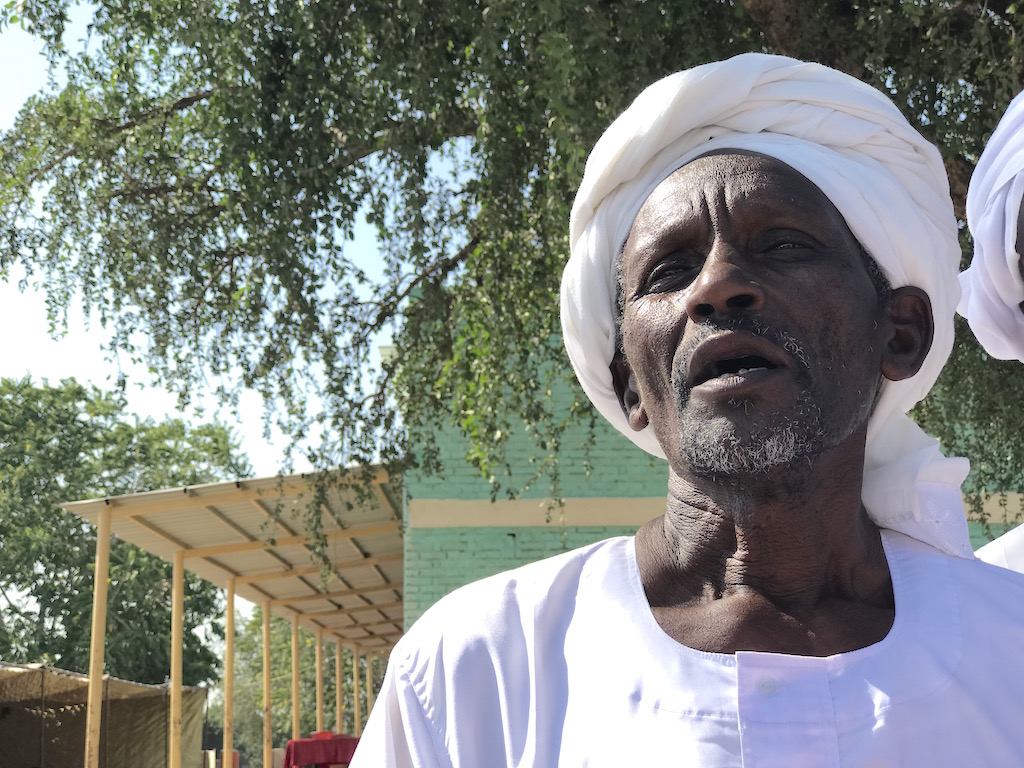 Salah has become an advocate for modern farming with his fellow farmers.

“Our exciting challenge is making this project sustainable as we move ahead. I see positive transformation with this continued and increased participation. I thank European Union, the State Governor, Ministry of Agriculture, the HAC and all our partners for their support and collaboration, without which this transformation will never be possible”, he concludes. World Vision’s programs in the Blue Nile State have reached out to 380,344 people with a budget of USD 4.7 million that include health and nutrition, education, food security and livelihoods and protection activities. 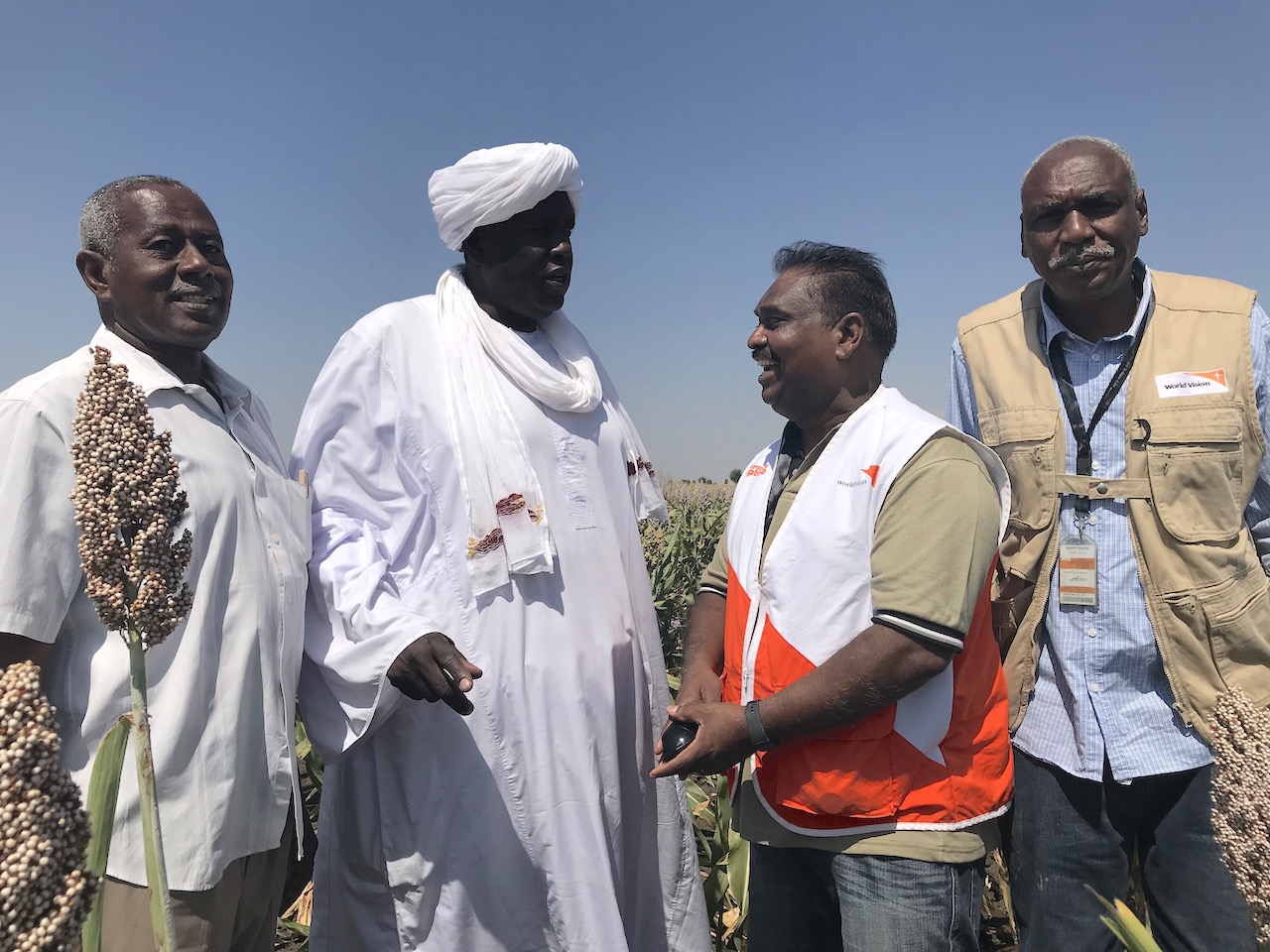