“My head was swimming when the doctor said my child had a hearing problem, which caused a speaking one too,” recalls Lien. Two years ago, she and her husband, Nam, had travelled nearly 300 kilometres to a paediatric hospital to discover why their 18-month-old son, Trung, couldn’t speak.

How to afford a hearing aid, let alone ear surgery, tormented the young couple on the long journey back to Vietnam’s central province of Binh Thuan.

The mother first noticed something was wrong when Trung was 15 months old and didn’t respond to her voice.

What would a soundless life be like for him?

“My left leg doesn’t work properly,” the 34-year-old prayed at the time. “I wouldn’t care if the other one didn’t either as long as my child could hear and speak like others.”

Lien had polio when she was 10 months old, which caused her left leg to be very thin. She can’t stand for long or walk far, so had no chance of earning money like other local women, who prepare soil, harvest cassava and plant rice seeds.

As the youngest and most disadvantaged daughter, Lien received a small plot from her parents, who gave her a section of their backyard for her own home when she got married. The makeshift shelter they built with a metal roof and wooden walls is only big enough for a small bed, fabric wardrobe, and a square dining table.

Lien’s husband was the family’s sole breadwinner, working and living on construction sites and with only a few days spent at home each month. His wife had to save every penny from her husband’s humble wage to make ends meet and turn their temporary structure into a liveable home.

The question of how to get a job plagued Lien, even though she has a qualification in accounting. Her anxiety grew wildly when she discovered her first child’s speech and hearing problems.

Benefiting from inclusive education for children with disabilities, Trung attends a kindergarten to improve his hearing and speaking abilities through communication with teachers and classmates.

What would a soundless life be like for him? Would he go to school and then find a job?

Thankfully, such worries also concerned World Vision’s health workers in the village, where the organisation supports vulnerable children and their families through its Bac Binh development programme. With their help, Lien took her son for a medical examination and was able to buy him a proper hearing aid, with the health partners also helping Trung to talk at home.

Benefiting from inclusive education for children with disabilities, Trung attends a kindergarten to improve his hearing and speaking abilities through communication with teachers and classmates. Consequently, he is no longer a shy, silent boy. The more his mother takes him there, the more he learns to speak. He says, “I have many friends there, so I’m happier [than at home].” 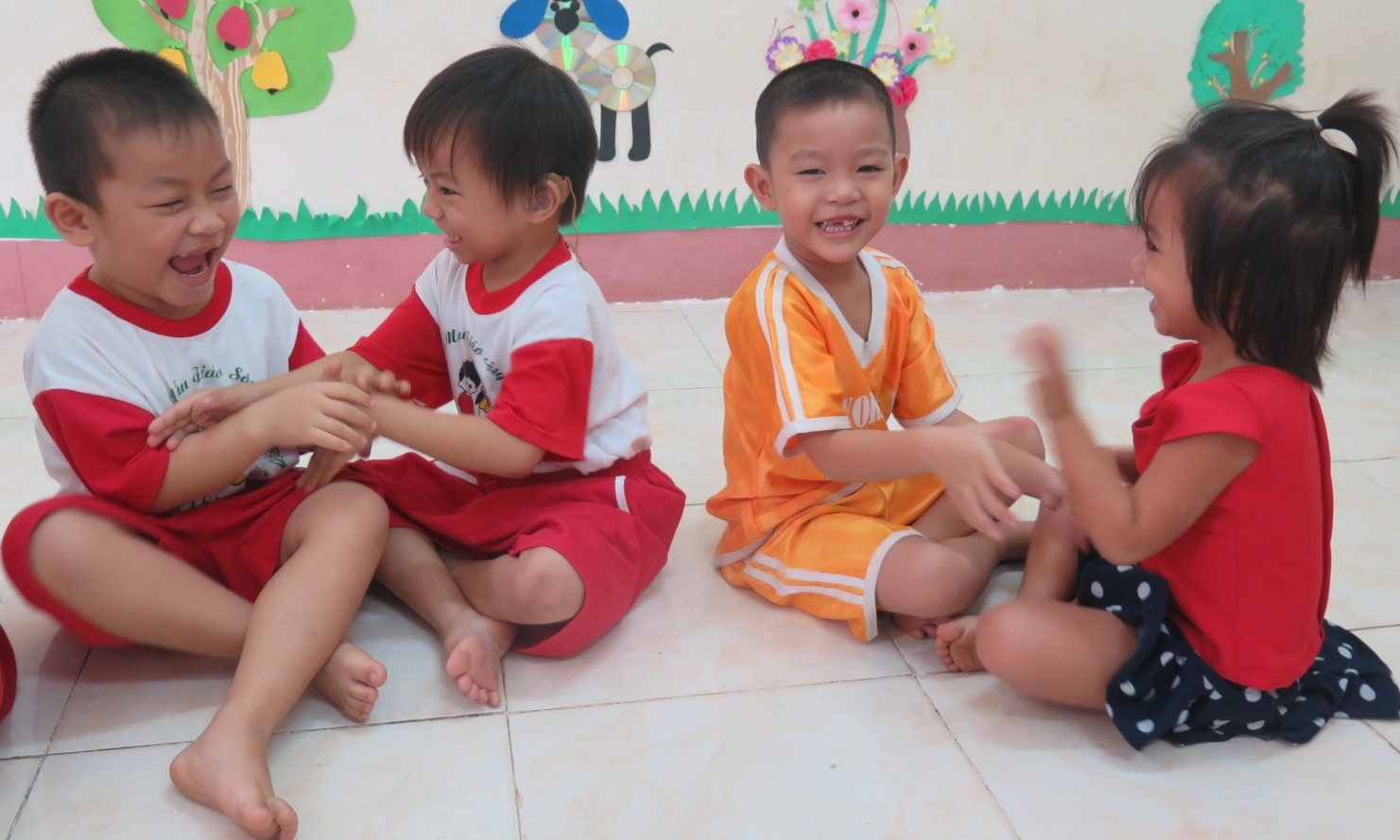 Lien adds, “I cried with joy when I heard my child clearly shout 'Mum' for the first time to his teacher and friends when I arrived to pick him up.”

Meanwhile, Lien also belongs to World Vision’s local nutrition club, in which 16 mothers and other caregivers with under-fives study child care, hygiene and the prevention of common diseases with health workers.

The club has offered support for Lien to cultivate vegetables and raise ducks to improve her family’s nutrition and income. Each club member also contributes 5,000 dong (20 US cents) every month to a non-interest credit and savings pool, which investors can use to borrow money.

“Such club activities really help us to strengthen our sense of community and mutual assistance,” she says. “Gradually, I felt more confident to go out and make money by raising ducks.”

Trung’s mother has also been trained in non-farming businesses to increase her household income and currently runs a small grocery and breakfast stall.

“I’m very happy that now I have an income from the skills and knowledge I learned from World Vision,” Lien continues. “So my family now has two incomes, even though they’re small. This helps my husband and me to feel securer about my child’s better life and future.”

Four-year-old Trung is one of 115 children with disabilities among the 7,200 children living in Bac Binh district. In the target area, World Vision works with families, community members and local partners to realise the children’s full potential, contributing to their well-being while lifting them and their families out of poverty.

See more of Lien and her son Trung: 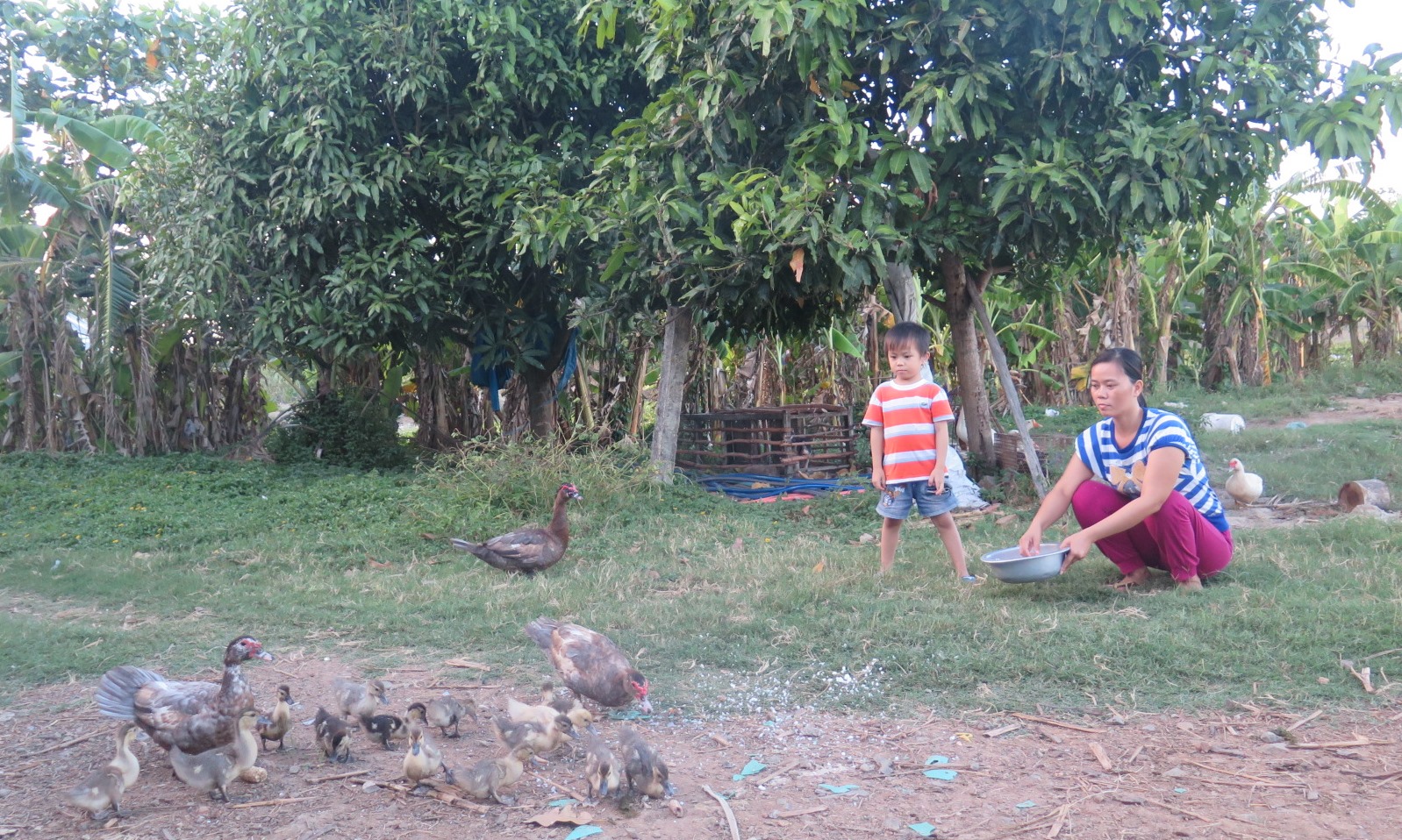 Lien is with her child Trung in the backyard where she raises ducks. As a member of nutrition club, she has been supported to plant vegetables and raise ducks to improve meals and income for her family. 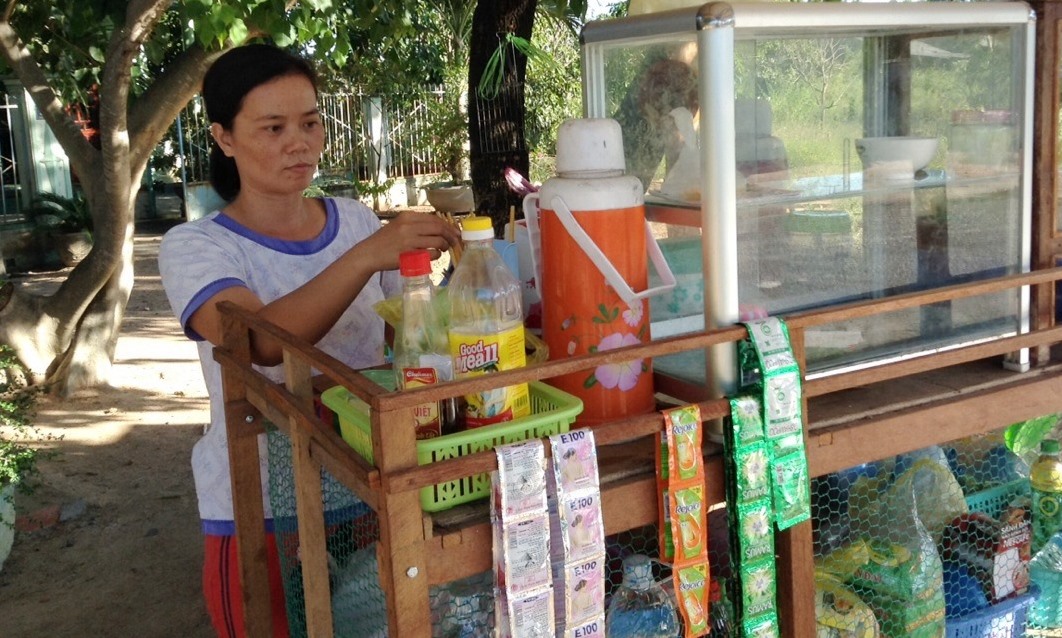 Lien at her small grocery and breakfast stall. She has also been trained in non-farm business to increase her household economy. 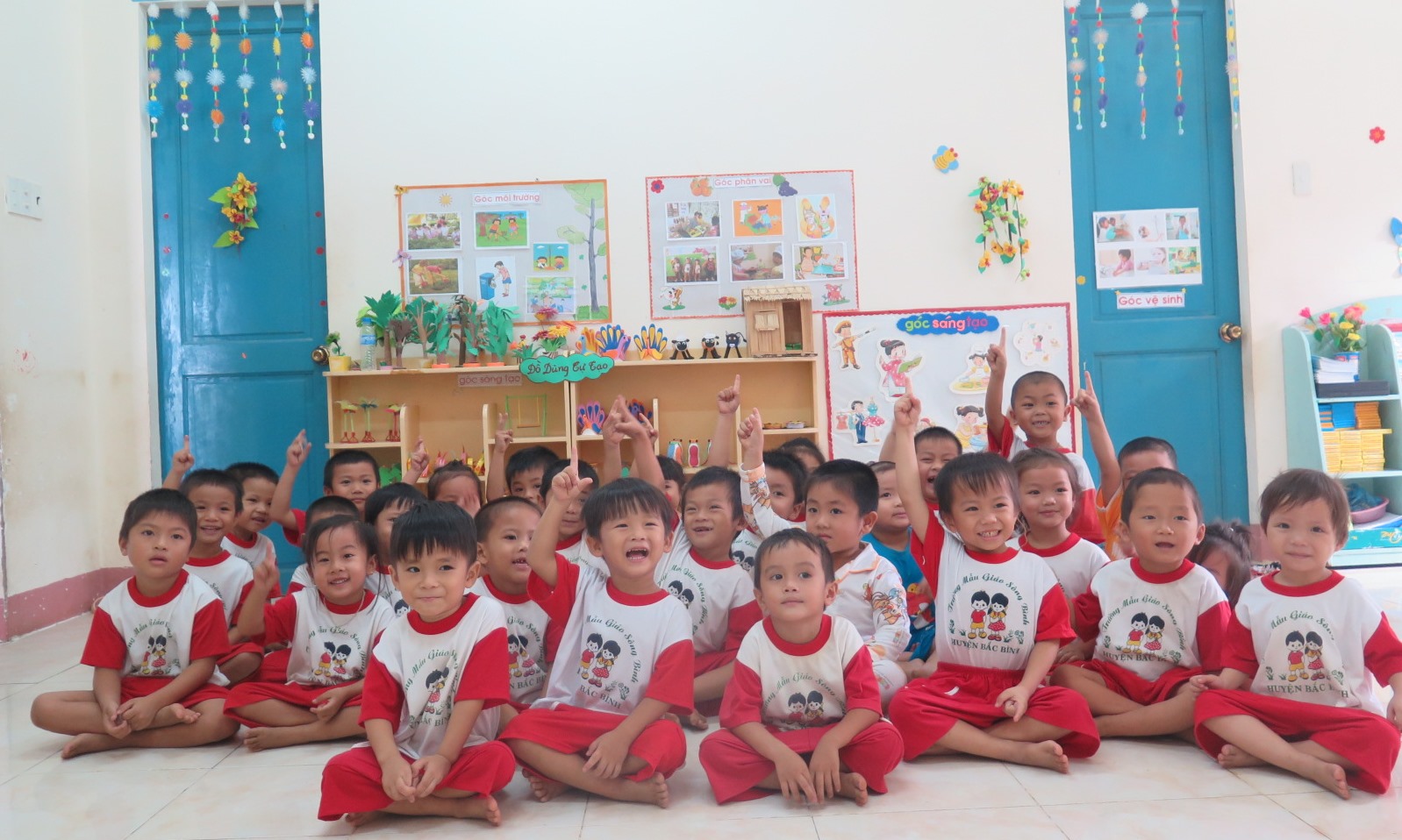 Trung, Lien’s son (1st row, 3rd right), is with his friends enjoying a kindergarten class. Making the best of inclusive education for children with disabilities, she has sent him to kindergarten so that he could recover better his hearing-speaking ability through interactive communication with teachers and other fellow kindergarteners. 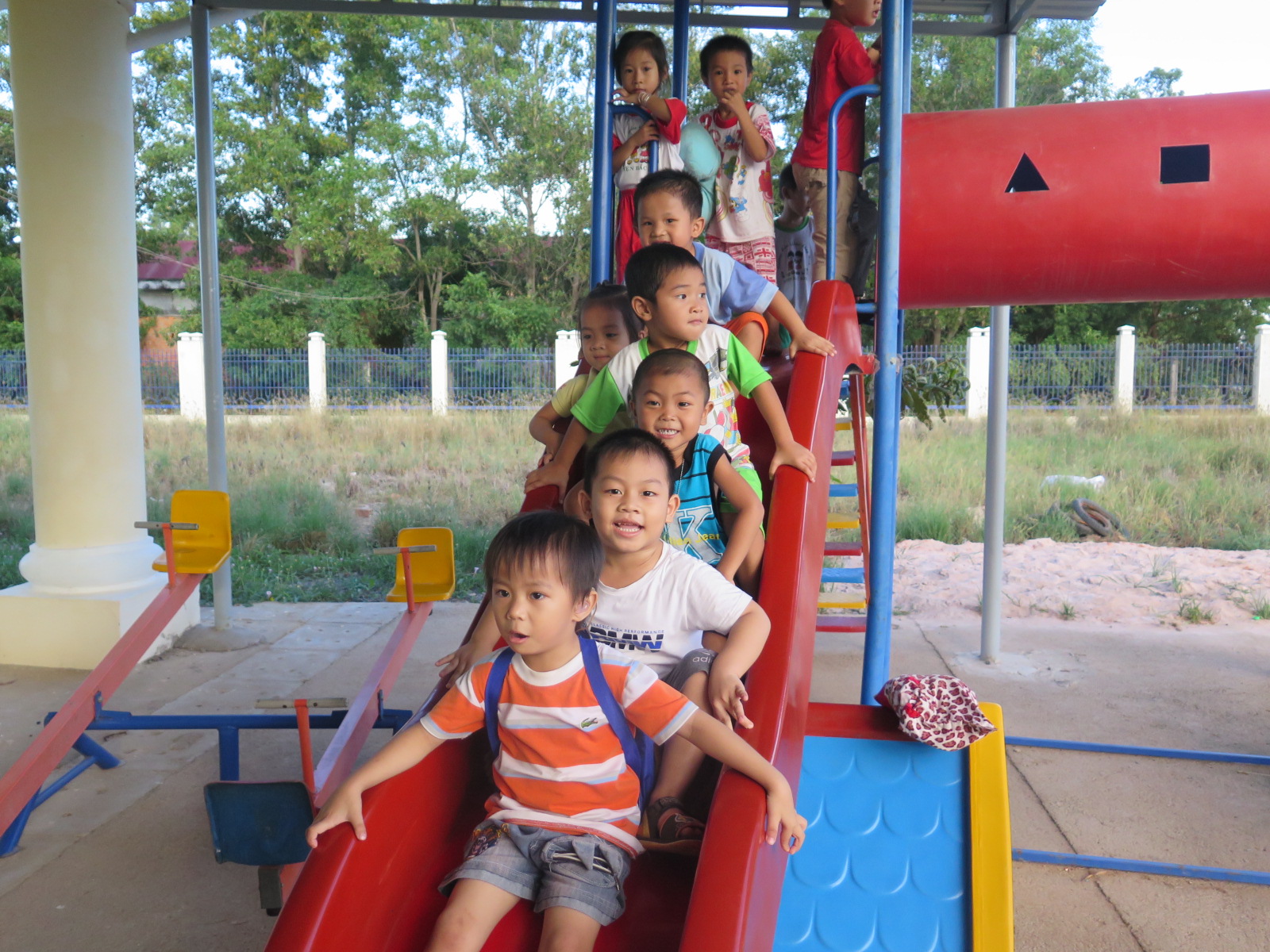 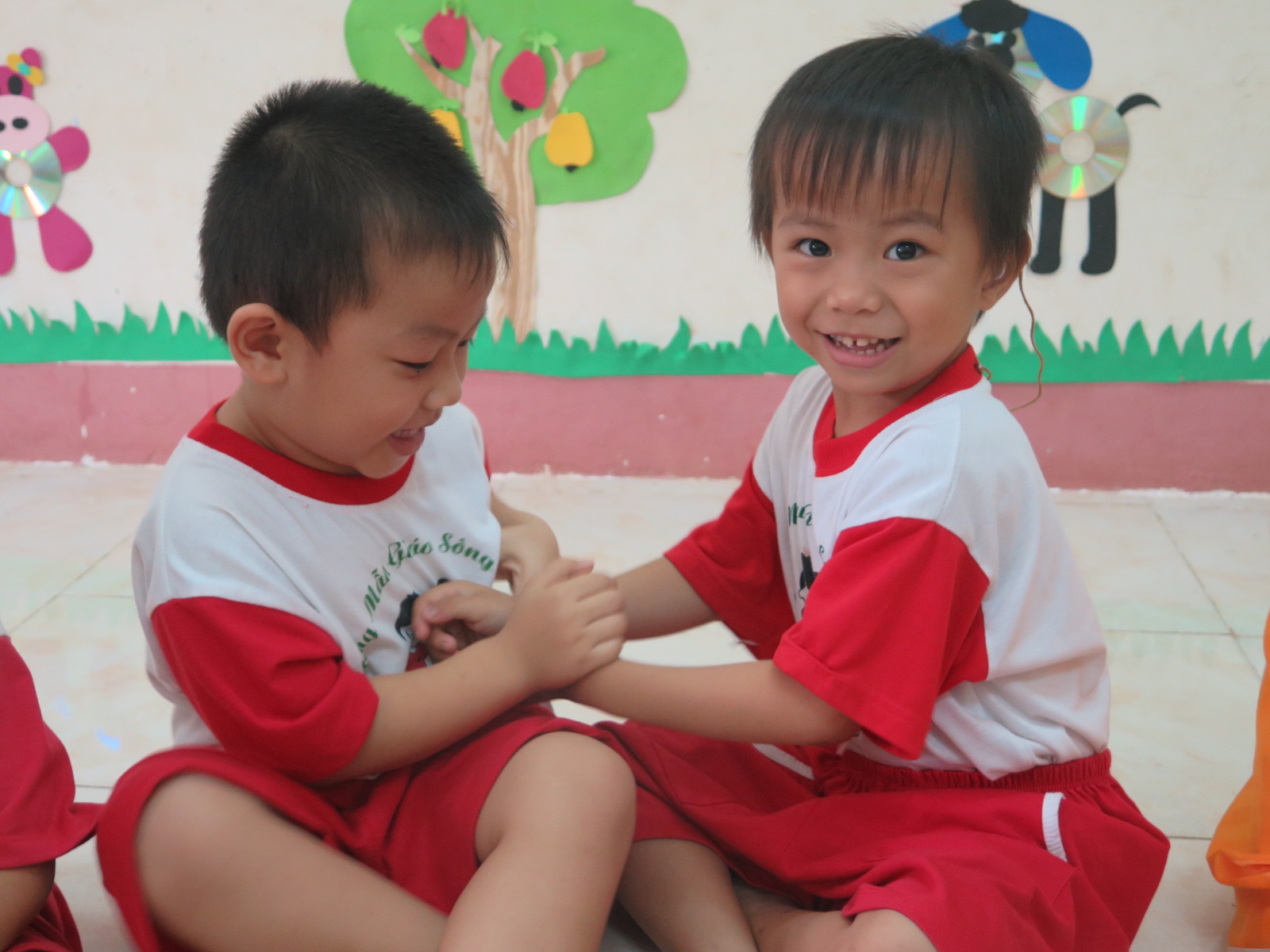 Trung enjoys playing slide and group games with his friends at their kindergarten. Trung is no longer a shy and silent boy as before. The more his mother takes him to kindergarten, the more he learns to speak and prefers kindergarten to home!