Timor-Leste’s alarming malnutrition levels are among the highest in the world with over 50% of children under five classified as stunted and 11% classified as wasted. Childhood stunting occurs when chronic malnutrition stunts a child’s physical growth, while wasting is acute malnutrition indicating a low weight and height for age. Children who are wasted require immediate attention, care and treatment given the acuteness of the disease and the high mortality associated with the illness. Various international studies have associated a higher prevalence of wasting among children under five to sub-optimal duration of exclusive breastfeeding, poor wealth status, low levels of maternal education, large families, lack of availability of sanitation and living in remote rural areas, among others     .

Children who are undernourished are prone to developmental problems leading to poorer school performance, and later in life fewer professional opportunities with resulting lower incomes and a decreased ability to provide adequately for their own children. They also face an increased risk of chronic illness during adulthood. In the cycle of malnutrition, a malnourished pregnant woman is more likely to suffer from complications such as pre-term or low weight deliveries. In turn low weight infants are more prone to suffer from impaired brain development, higher mortality and infection prevalence and eventually become malnourished mothers themselves.

World Vision partnered with the World Food Programme and the Korea International Cooperation Agency (KOICA) to help combat malnutrition in one of Timor-Leste’s most affected regions, Covalima Municipality, where persistent food insecurity, hunger and harmful traditional beliefs contribute to a high prevalence of malnutrition. A wasting rate in Covalima of 17.4% is above the critical international cut off point of 15%.  The Covalima Nutrition Education project, which began in December 2015, aims to build the community’s capacity to manage acute malnutrition at the village-level in thirty target communities in Covalima Municipality through mobilising community members to encourage their participation in the Timor-Leste Ministry of Health’s targeted supplementary feeding programme and educating communities on nutrition, health care and water, sanitation and hygiene issues. The project supports caregiver education for early infant feeding (colostrum intake, early initiation of breastfeeding and exclusive breastfeeding practice) with a primary focus on growth monitoring and supplementary feeding programs for children aged 6-59 months and malnourished pregnant and lactating women, as they are particularly vulnerable to the effects of malnutrition. 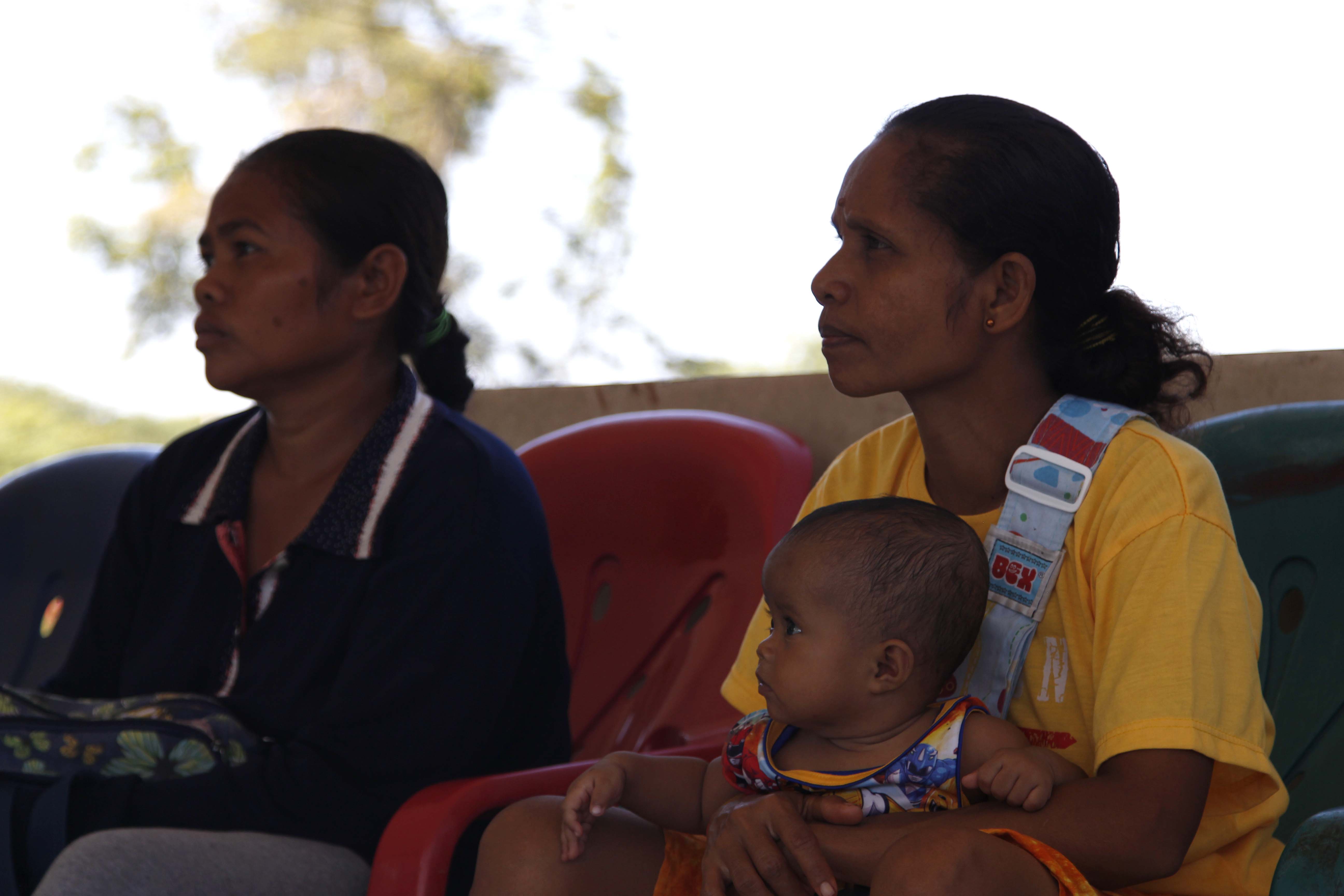 A range of approaches are used to mobilise the community including the use of mother support groups and other community groups, carrying out cooking demonstrations and establishing kitchen gardens to promote the use of locally available foods rich in essential nutrients, conducting regular home visits for nutrition counselling of caregivers and distributing behaviour change materials designed specifically for communities with low literacy levels.

Before implementing the activities, World Vision conducted a screening of all pregnant and lactating women, and children under five, in the target communities, to identify undernutrition cases, particularly those that present as acute malnutrition. These were then referred to the nearest health facility. Those referred received food supplementation and their progress was closely monitored by World Vision staff and health personnel with the support of mother support groups that were established as part of the project.

It was during these household visits that World Vision staff first met two-year old Astrya, who was living with her grandparents. Astrya was clearly acutely malnourished and had very little energy. Her mid-upper arm circumference measurement was just 8.7 centimetres in January 2016. At her age, she would need to have a mid-upper arm circumference measurement of over 12.5 centimetres to be considered within acceptable nutritional parameters.

World Vision Nutrition Education Facilitator, Baltazar da Costa Ximenes, said, "The first time I met Astrya, she was so very thin and she had no desire to play. I had tears in my eyes when I looked at her. She desperately needed help but her grandfather Bernadino refused World Vision’s assistance as he felt he could treat her with traditional medicine.” 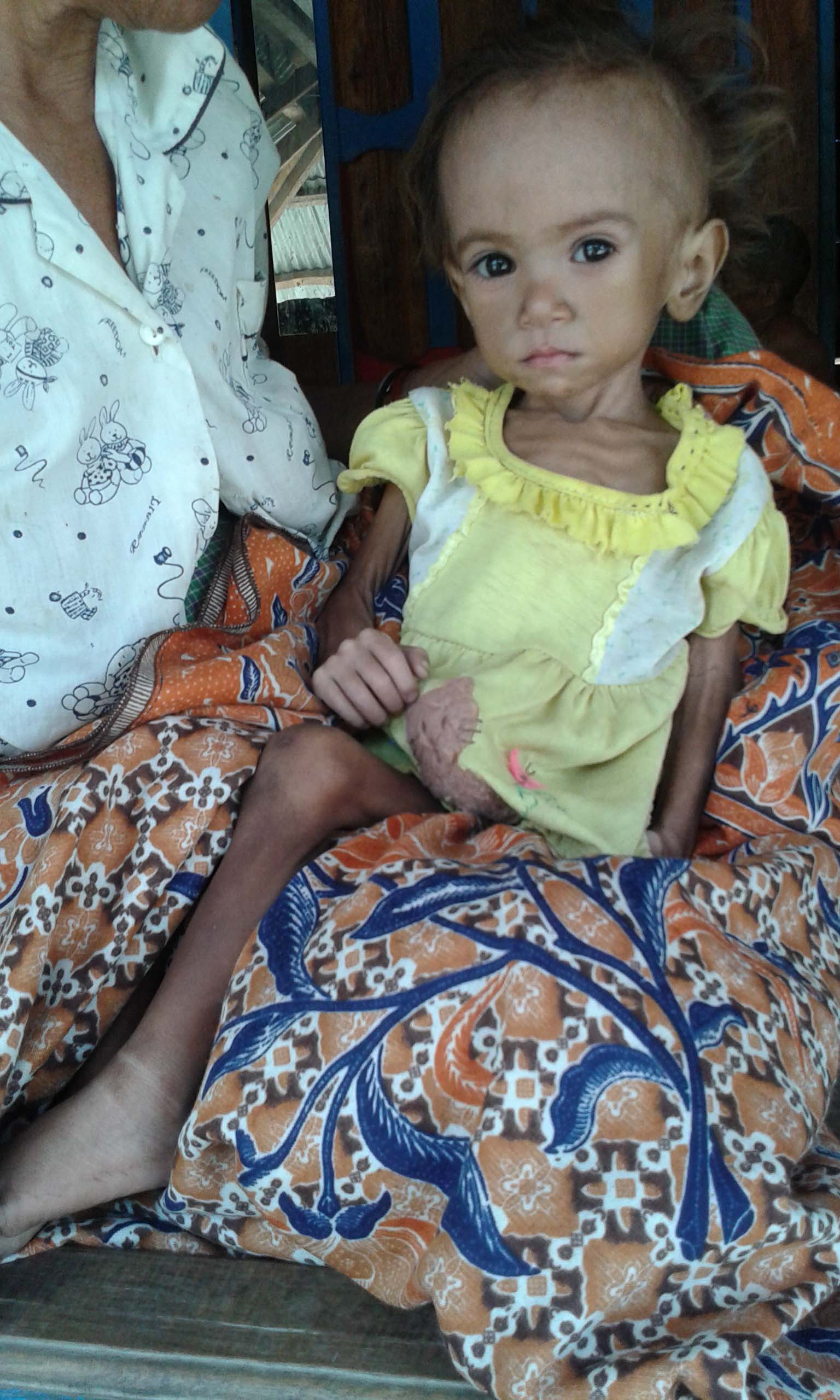 Astrya was acutely malnourished when World Vision staff first met her in early 2016.

Dr Raul Schneider, World Vision’s Senior Health Advisor for the Pacific and Timor-Leste, shared, “Astrya was in a high-risk category. Children of Astrya’s age with a mid-upper arm circumference measurement of less than 11.5 centimetres have been found to have a mortality rate up to nine times higher than healthy children according to studies published by the World Health Organisation.”

Mr Ximenes revisited families he had given health post referral letters to, including Astrya’s, to follow up on their progress, but she was no longer living with her grandparents. Mr Ximenes was informed that Astrya was staying with her mother in government subsidised housing. But due to food shortages, they left that location and went to live with another set of Astrya’s grandparents.

Mr Ximenes was determined to find a way to help Astrya. He informed the local health post of the little girl’s condition and they visited Astrya to provide a month’s supply of the peanut-based food supplement Plumpy’Nut, which is used to treat acute malnutrition.

Mr Ximenes continued to visit the family to provide food supplements for Astrya and offer her mother and grandparents nutrition advice for the little girl. Gradually Astrya’s health improved and her mother and grandparents were happy to see the positive changes in her. Her mid-upper arm circumference measurement had increased to 10.6 centimetres in April 2016 and by June 2016 was a healthy 13.6 centimetres. Astrya’s grandfather, Renaldo, said, "This program is very good, I was afraid of Astrya's condition, but this program made Astrya's health improve because she ate the food supplement and we got nutrition information from World Vision. I hope this program continues." 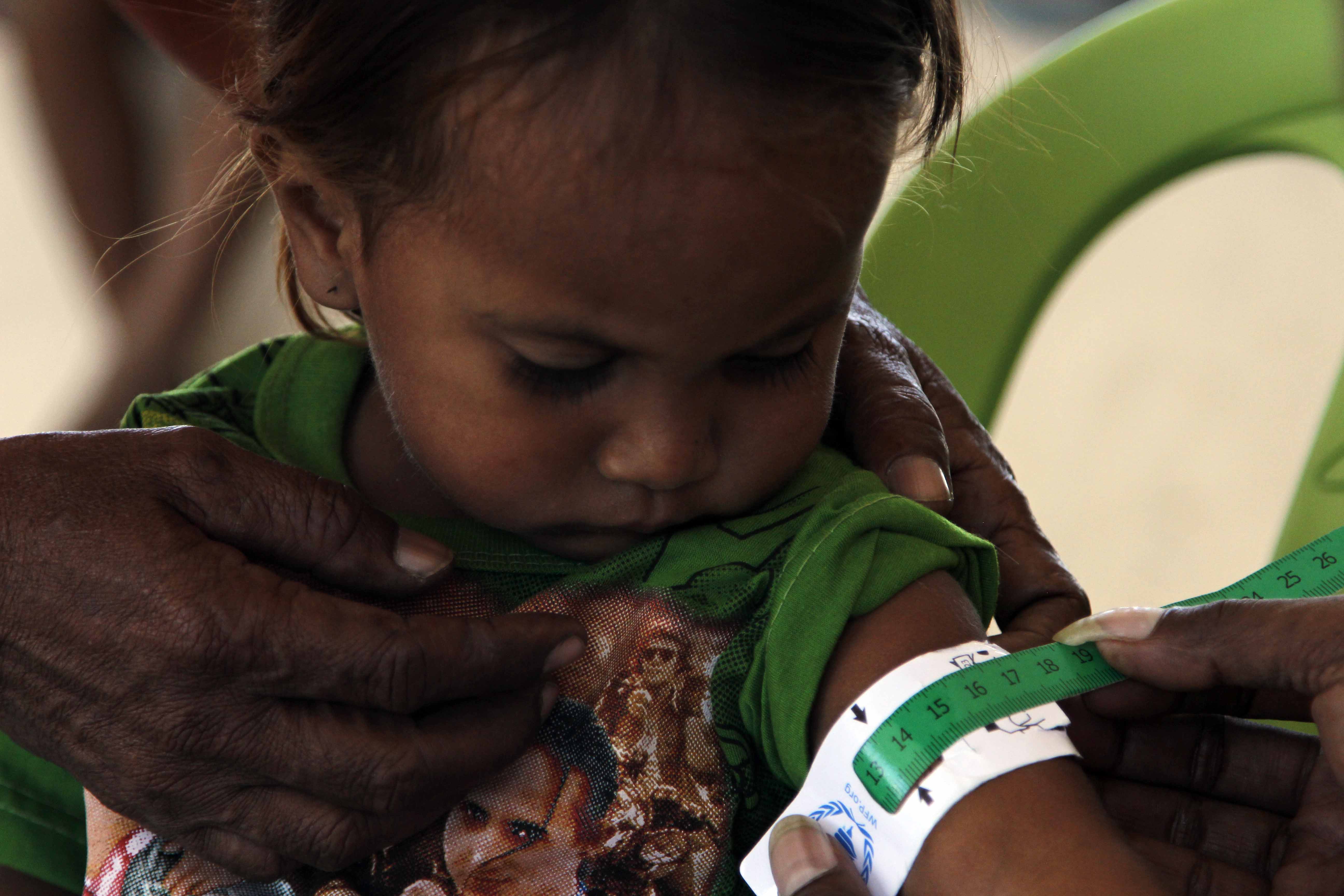 Mr Ximenes shared, "We had to overcome several challenges to get Astrya the help she needed but I am thrilled she is now healthy. It’s a joy to see she has the energy to play with her friends.”

Dr Schneider said, “Astrya was severely malnourished and required specialised care by the health facility and then regular follow up by the community health workers trained by the World Vision project. Thanks to the dedication of the community health workers, growth monitoring on a weekly basis, the Plumpy’Nut supplement provided by the project through the World Food Programme and the Timor-Leste government, and the nutrition, hygiene and sanitation education support provided to the caregivers, Astrya could make a full recovery. This project probably saved her life.” 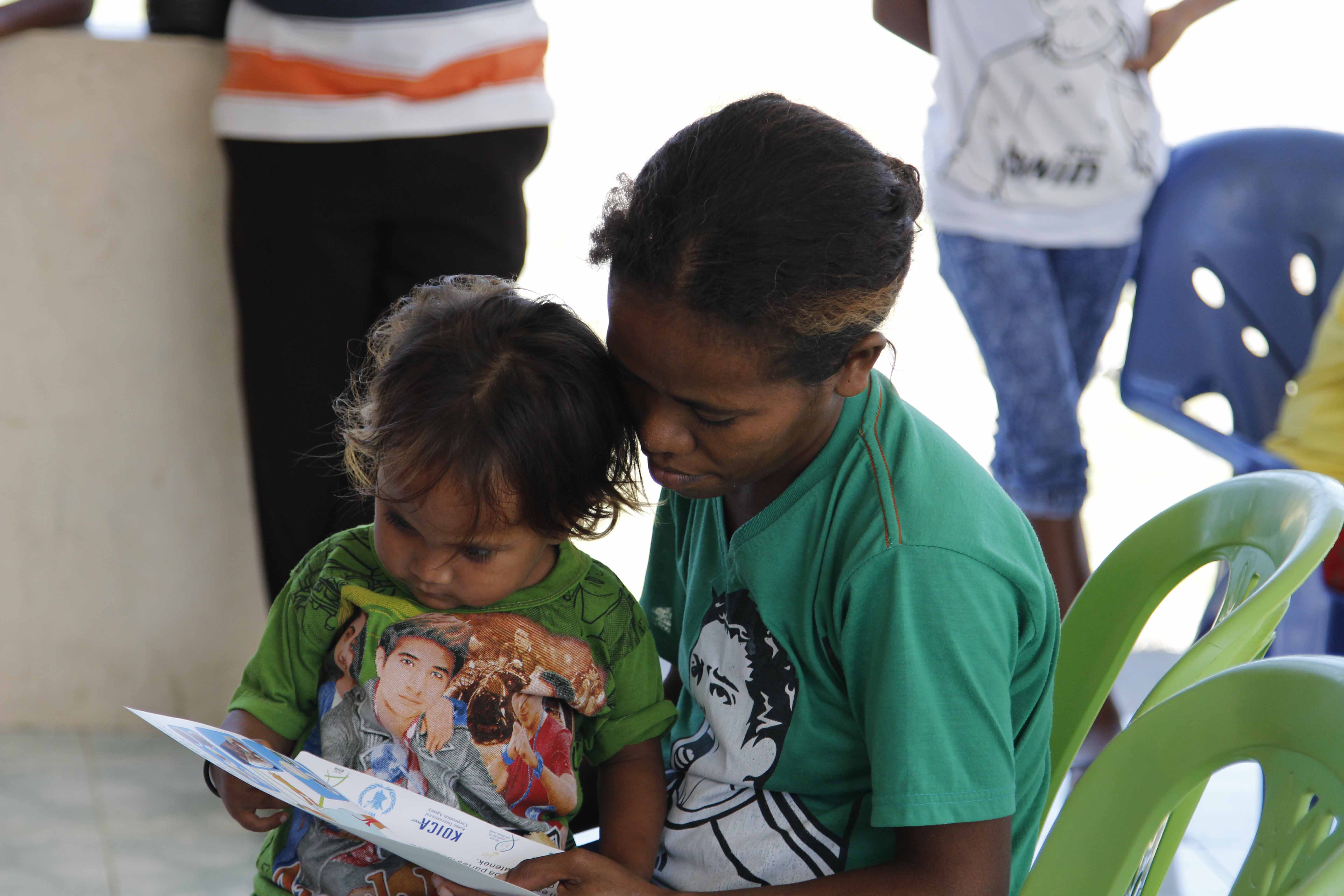 Along with providing Astrya’s mother and grandparents with information on nutrition, including the importance of feeding her a variety of local foods, Mr Ximenes also spoke to them about hand washing with soap and advised them to take Astrya to the local health post if she is ever feeling unwell. 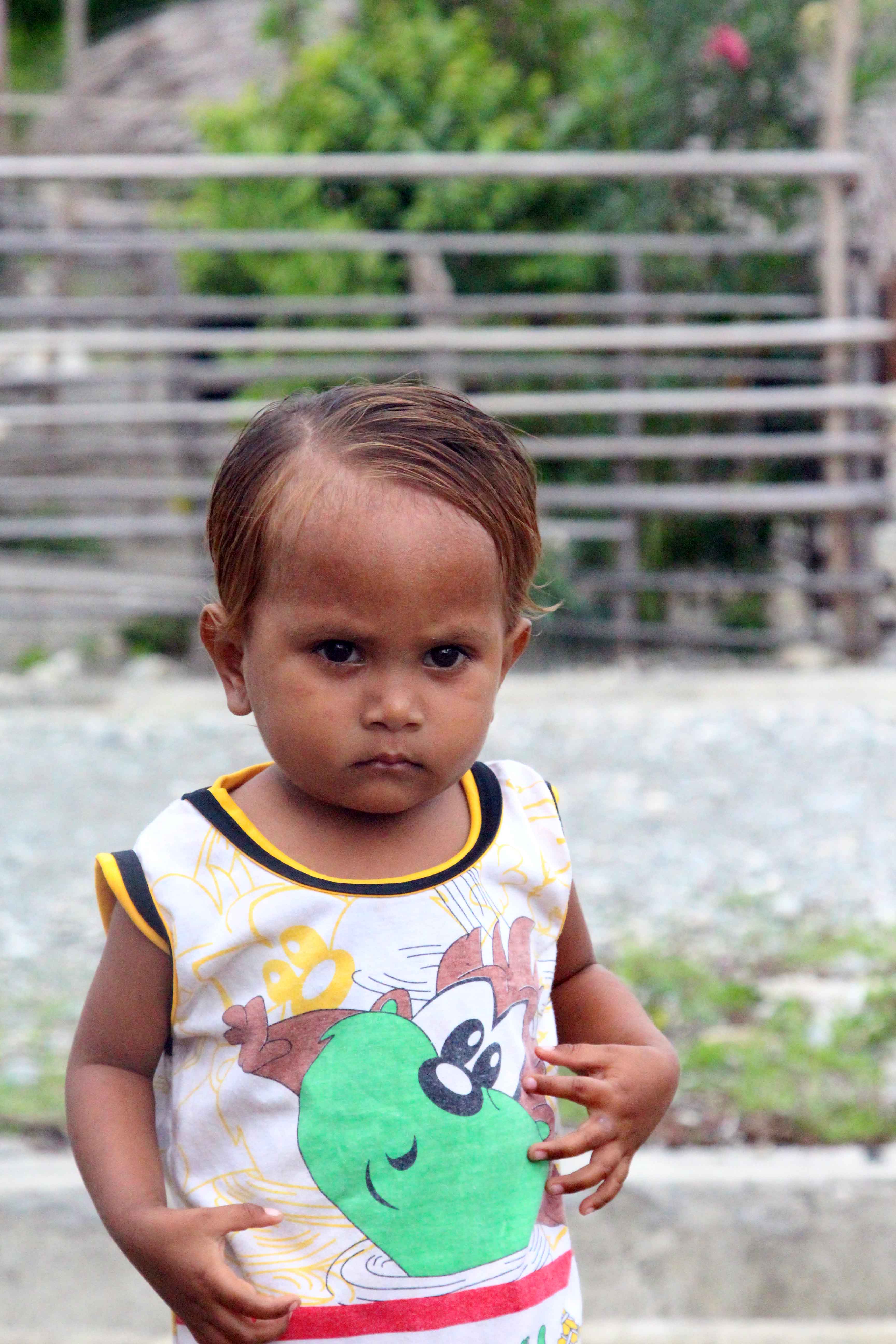 "This program is very good. I was afraid of Astrya's condition, but this program made Astrya's health improve because she ate the food suplement and we got nutrition information," shared Astrya's grandfather.

In Timor-Leste, administering traditional treatments is still widely practiced. A common belief in the effectiveness of these practices often means parents or guardians don’t seek medical advice when their children are sick. Some believe people fall ill because of a curse and to restore health, they must pay fines, such as sacrificing animals, to their ancestors through cultural practices. Education and raising awareness of these harmful traditional beliefs, as well as administering supplementary feeding and providing referrals to local health posts, have been key contributors to improving the nutritional status of Astrya and many other children in Covalima Municipality, who now have a solid foundation for a brighter future.