In the heart of Jordan’s eastern desert lies the municipally of Azraq. Azraq, the Arabic word for ‘blue’, got its name from the glittering pools and streams of the oasis between a limestone desert in the west and a basalt desert in the east.

The Azraq wetland is the only oasis in the Arabian Desert with a self-replenishing system that has allowed it to sustain itself throughout the years. The Azraq Wetland Reserve was established in 1978 to conserve the precious oasis distinguished by lush marshland and natural water collections. 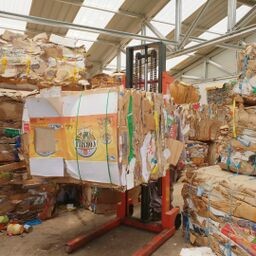 On 1 October 2018, as the global community celebrates World Habitat Day with the theme Municipal Solid Waste Management, the Green Centre in Azraq Refugee camp will mark its 1st year of establishment.

The Green Centre built by the Environmentally Responsible Solid Waste Management Project funded by the European Union and World Vision recovers an average of 34 tons of recyclable waste per month. The segregation of solid waste within each refugee shelter and the sorting of collected waste in the Green Centre is reducing the volume of solid waste sent to the landfill.

“The safe disposal of solid waste is critical to ensuring the protection of the environment and public health, so World Vision Jordan, through its solid waste management (SWM) project which also includes a behavioral change component is providing indispensable services in the camp”, says Nicole Peter, Interim Response Manager.  “But what sets this project apart is how we have started to think differently about waste in the humanitarian context, where garbage- with its commonly “negative” connotation- is seen as a source of opportunity providing income to Syrian refugees through its cash for work and recycling components. It’s a project were waste is certainly not wasted but instead is repurposed in a way that gives rubbish a whole new and positive meaning for vulnerable families” she added.

Hasmik Kocharyan, SWM Project Manager stressed “after the transition of the solid waste management services in the camp into a new system, we were able to ensure a stable waste collection for 36,699 refugees, and reduced the amount of waste transferred to the landfill”. She added that the proceeds from the sale of recyclable materials covered the landfill cost thus removing the burden from the international community.  “Most importantly, we were able to engage the refugees in the project activities- through collection, sorting, campaigning and segregating of waste in the camp!”, says Ms. Kocharyan.

The volume of solid waste sent to the landfill was reduced to 514 tons monthly with the current waste sorting. The full implementation of the behaviours change strategy in all villages of Azraq camp will help increase the volume and quality of recyclables.

A solar grid generates sufficient electricity to operate the Green Centre including the bailer to compact waste. A conveyor belt and plastic shredder are in the process of acquisition to further enhance the efficiency of the Green Centre.

In 23 September, around 92 tons of cardboards were bought by a recycling company from the Green Centre in Azraq Refugee camp. Sixty-two (62) tons of plastics and almost six tons of high grade plastics or PET (polyethylene terephthalate) were sorted and sold to help sustain the Green Centre operation.