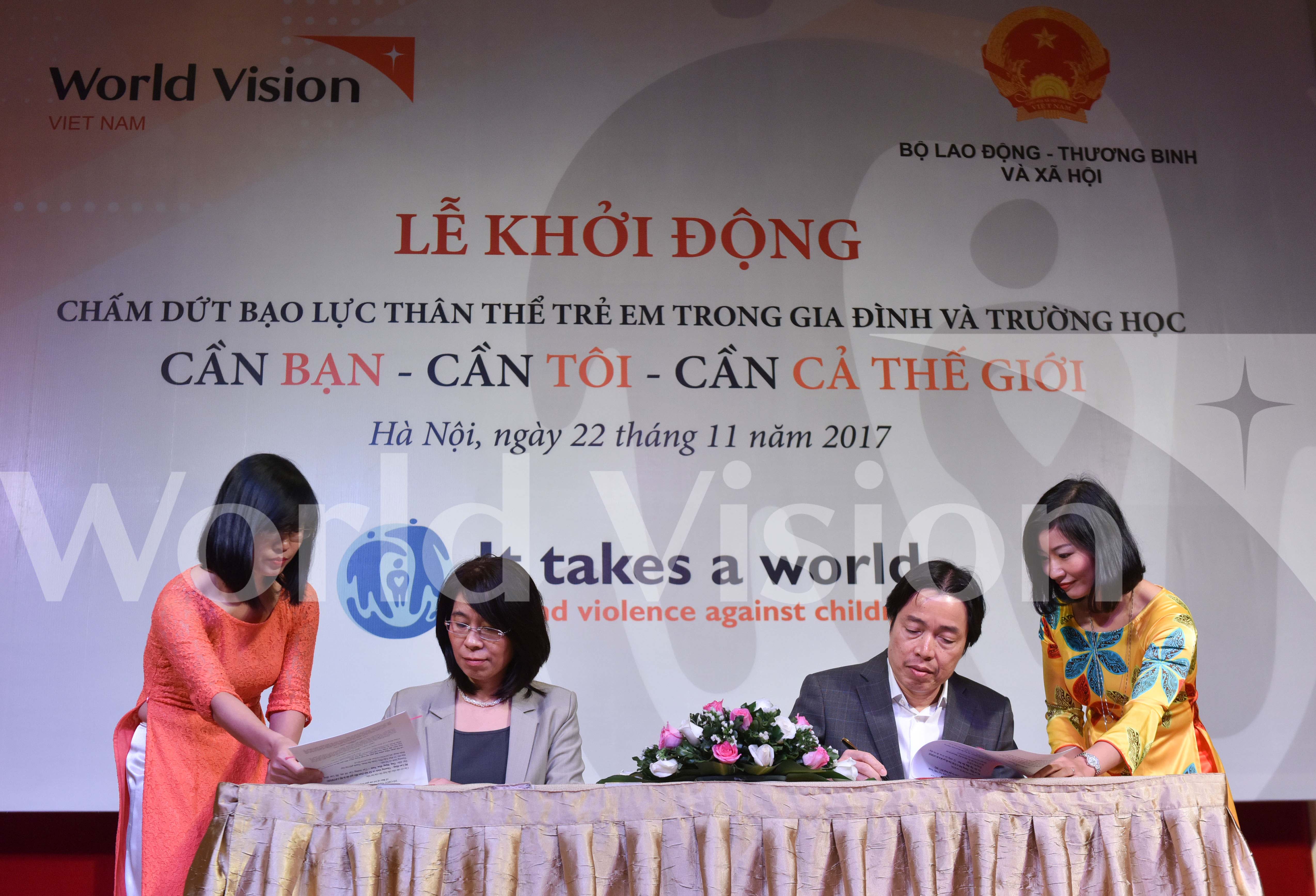 Hanoi, 22 November 2017 - In response to the Five Year Global Initiative on Ending Violence against Children initiated by World Vision International, World Vision Vietnam in cooperation with the Ministry of Labour - Invalids and Social Affairs (MOLISA) - a longstanding partner - launched a five-year campaign on "Ending Violence against children at home and school" to raise awareness and call on each member of society to contribute to a healthy, safe and secure living environment for children, especially the most vulnerable children. Attending the event were senior representatives from World Vision, MOLISA, Ministry of Education and Training (MOET), embassies, United Nations Children's Fund (UNICEF), local and foreign NGOs, corporates, press agencies, parents, teachers, and children.

Various sharing and discussions throughout the event highlighted the issue and addressed practical solutions in aiming to end physical violence against children at home and school - two particularly influential environments for the development of a child.

Vietnam has witnessed significant change in people’s awareness and active search for advanced child-friendly teaching methods. However, this change is not yet pervasive across all groups in the society. According to the thematic report on intervention and support for the violated children through the child counselling and supporting hotline 1800 1567 (Children Department - MOLISA, June 2017), out of 698 cases of children receiving support from the Child Protection Hotline from 2012 to May 2017, 91.7% of the children had endured physical violence; 56.9% of them were under the age of 10; the highest proportion (63.2%) of physical violence cases against children occurred at home and while 20.1% happened at schools.

“Physical violence against children is an issue that cannot be addressed by one individual or agency.  It requires the world to take action in order to eliminate it,” said Warren Climenhaga, East Asia Regional Director - Integrated Ministry, World Vision International.

Idioms and proverbs such as "Spare the rod, spoil the child" are still used by a number of parents and teachers to discipline children, which is the main cause of physical violence against children at home and school in Vietnam.

At the launch event, Tran Thu Huyen – National Director of World Vision Vietnam stated: “When parents and teachers are careful with their attitude and behaviour towards children, the positive impact will not be limited to home and school, but will spread in society. The social environment will also gradually become safer for children to grow up physically and psychologically.”

“Physical violence scares us and makes us more stubborn. I am afraid that later on we will unconsciously follow our parents’ path by using violence to solve our problems. I wish parents could use words to comfort and encourage us rather than using physical punishment against us,” expressed Luong Thi Quynh – Child Ambassador of the campaign.

Celebrities and children from WVV's programmes gave live performances at the launch event, to portray a lively picture of the situation of physical violence against children as well as the prospect of a violence-free world where all children are protected, cared for, and loved. In particular, the launch event introduced “The Best Thing in Life” - performed by musician Ta Quang Thang, singer Ha Anh Tuan, and the children.

The event was concluded as all participants pledged their commitment to supporting the campaign. The signing of a five-year cooperation agreement between the Ministry of Labour - Invalids and Social Affairs and World Vision Vietnam took place as the first initiative to encourage future involvement of agencies, corporates, media centres, and individuals in the campaign in particular and effort to end violence against children in general.