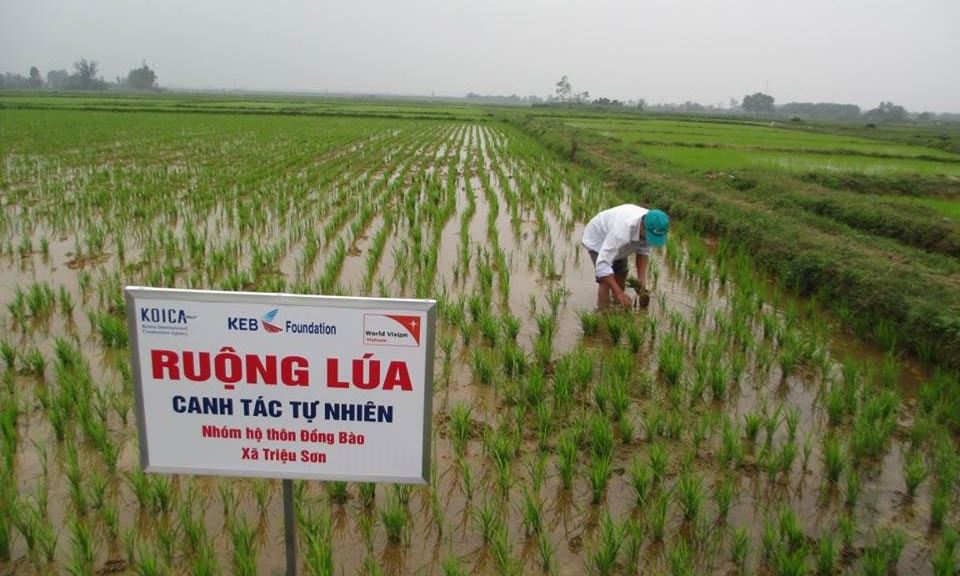 Korea International Cooperation Agency (KOICA) and World Vision Korea (WVK), via the representation of World Vision Vietnam, give an aid of approximately USD 1 million to Trieu Phong district of Quang Tri province to develop the value chain of natural farming based products.

With the implementation time of 3 years, the project has the gross fund of USD 992.228 (equivalent to VND 20 billion) and aims to help improve the incomes of farmers, especially the poor and with children under 5 households in 5 targeted communes in Trieu Phong.

More precisely, in the years 2017 - 2019, it focuses on consolidating and expanding the model of natural farming to 1000 households in 5 communes of Trieu Trung, Trieu Tai, Trieu Son, Trieu Trach and Trieu Thuong.

The project endorses the application of natural farming on local main plants and livestock such as rice, vegetable, chickens and pigs, as well as promotes and delivers clean food to consumers, step by step commences the brands for local products, in order to sustainably increase the value of Trieu Phong food.

The direct beneficiaries of the project are the households in 5 targeted communes, with priority to the poor, children and disables.

This is a further step from the previous project of “Promoting environmental friendly models” implemented in Trieu Phong in 2015 – 2017, which assisted local people in applying biogas model in combination with large scale pig raising; applying the model of cheap, fuel economic and improved stoves; constructing landfill and equipping the local waste collectors; producing clean food from natural farming.

Outstanding outcomes are clean products such as rice, eggs, chicken…, which have been introduced to local and nation-wide customers.

The most important quality of the natural farming is the reduction or elimination of chemicals and pesticides, combining environment protection with market oriented production, to meet the urgent needs for safe food.