After nearly a decade of war in Syria, thousands of refugee children have been living in a state of limbo, not knowing when, or even if, they will ever return home. In light of a global pandemic, these children face even more uncertainty.

COVID-19 has had a profound effect on the well-being of children living in refugee camps throughout the Middle East. The first official confirmed case was reported in Jordan on the 2nd of March this year. Shortly after and as a precautionary measure, the Jordanian Government announced the suspension of schools, kindergartens and all educational activities.

Like many cases across the world, children in Azraq Refugee Camp have had their daily routines disrupted. No longer can they go to school, play with their friends or even leave their homes. In some cases, children are sharing rooms with up to six family members, with little means of entertainment or electricity supply, which is limited to certain hours per day.

When I grow up, I hope that this virus disappears so I can go see the white snow in Syria; the country that my parents always talk about

Parents are constantly asked by their children when this would end. Uncertainty has remained a constant factor in the lives of these Syrian refugee families. “When I grow up, I hope that this virus disappears so I can go see the white snow in Syria; the country that my parents always talk about,” said five-year-old Qutaibah. 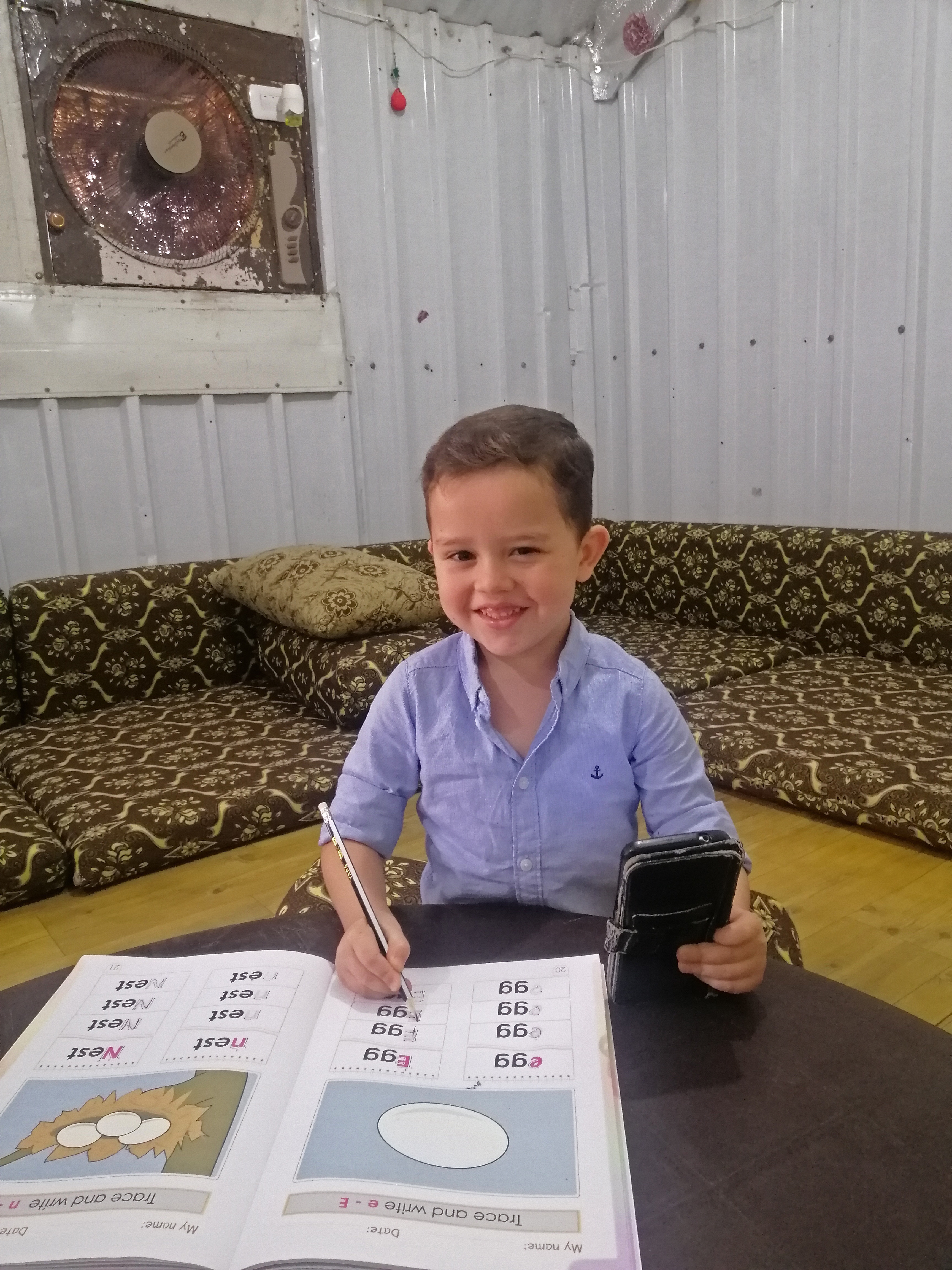 Qutaibah was born in Azraq Refugee Camp and his family comes from Homs in Syria. He used to attend one of the early childhood education centres in the camp that is run by World Vision’s Early Childhood Development programme. His favourite activity inside class is drawing and painting.  “I have many friends at the centre that I love,” he added.

The early childhood education centre supports a holistic development of children’s emotional, social, cognitive and physical aspects through classes in different subjects such as; Arabic, English, Maths, art and music. It provides the Ministry of Education’s kindergarten curriculum for children and allows them to engage in activities outside the classroom such as playground activities, participating in festivals and play days, and celebrating national and international holidays. However, due to the COVID-19 pandemic, our centre had to close its doors by the end of March, and adapt to new methods of remote learning.

“When the Jordanian government announced the suspension of educational activities, I was concerned about the academic and social impact this would have on my children, yet the help of staff from World Vision has given our children the opportunity to continue their educational progress without interruptions,” commented Manal, Qutaibah’s mother. 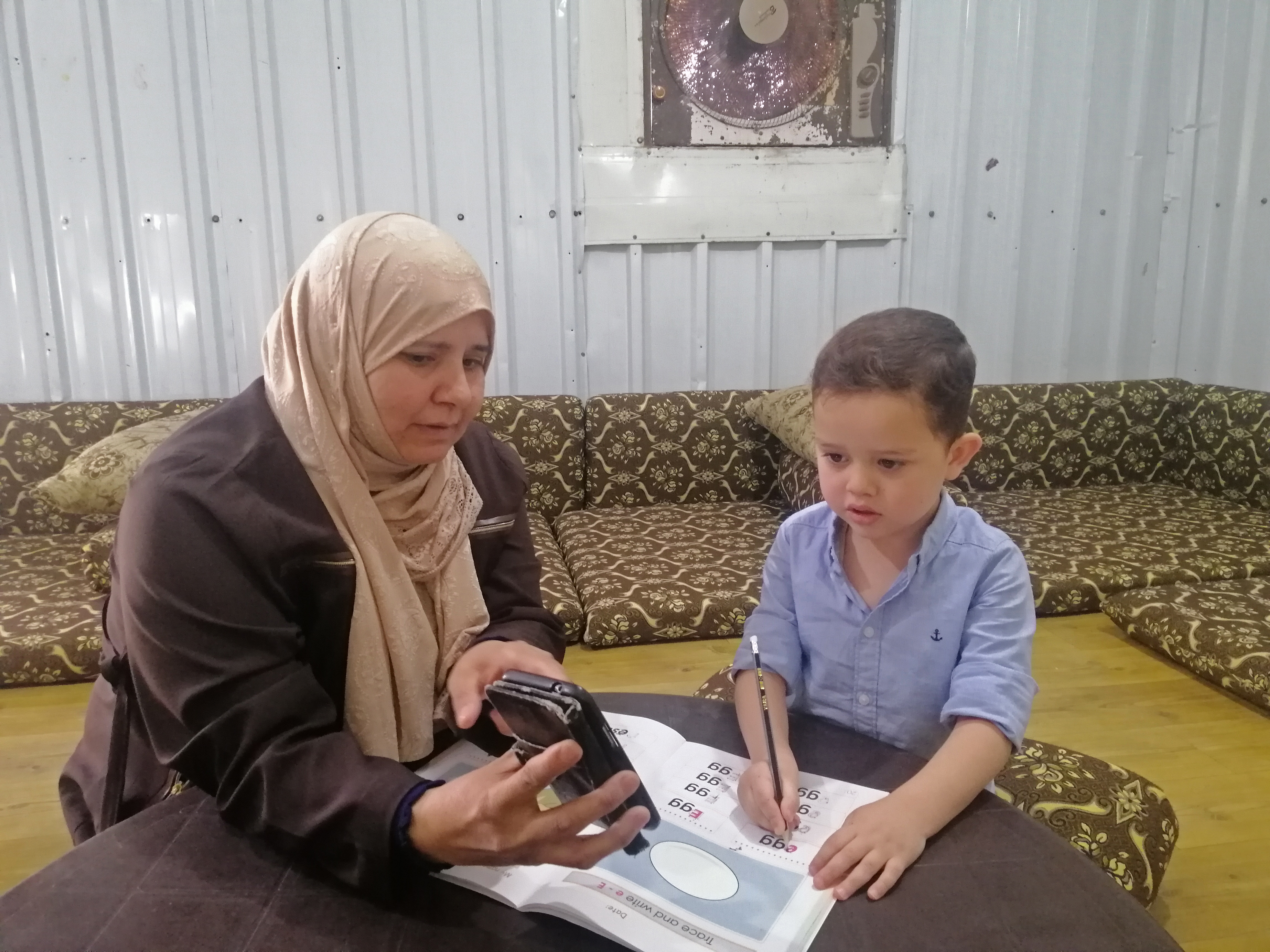 The nationwide lockdown has resulted in many families losing their source of income, which led to an increase in stress levels and uncertainty in the lives of these Syrian refugee families. According to World Vision’s latest survey among refugee camps and host communities in Jordan, 78 per cent of respondents reported feeling stressed during the curfew mainly due to insufficient household income, strained family relations, and interrupted education for their children. Moreover, 61 per cent of caregivers reported that their children have shown signs of frustration during the lockdown and 48 per cent of these caregivers were unable to control it. Nevertheless, remote learning across the country has enabled continued access to education and therefore has become a glimpse of hope for the refugee communities, in particular.

Seeing how excited children were to participate and continue their educational journey, I was proud to be part of the remote learning programme

Fatima, 32, is one of the teaching assistants who has been working at the centre since 2016. She said: “I share the activities with children every day at the same time. On one day and due to an electricity outage, I was not able to send the children their homework at the usual timing. One of the children, who lived close by, walked over to my home, knocked on the door and asked me why I hadn’t sent them their daily assignment. Seeing how excited children were to participate and continue their educational journey, I was proud to be part of the remote learning programme.” 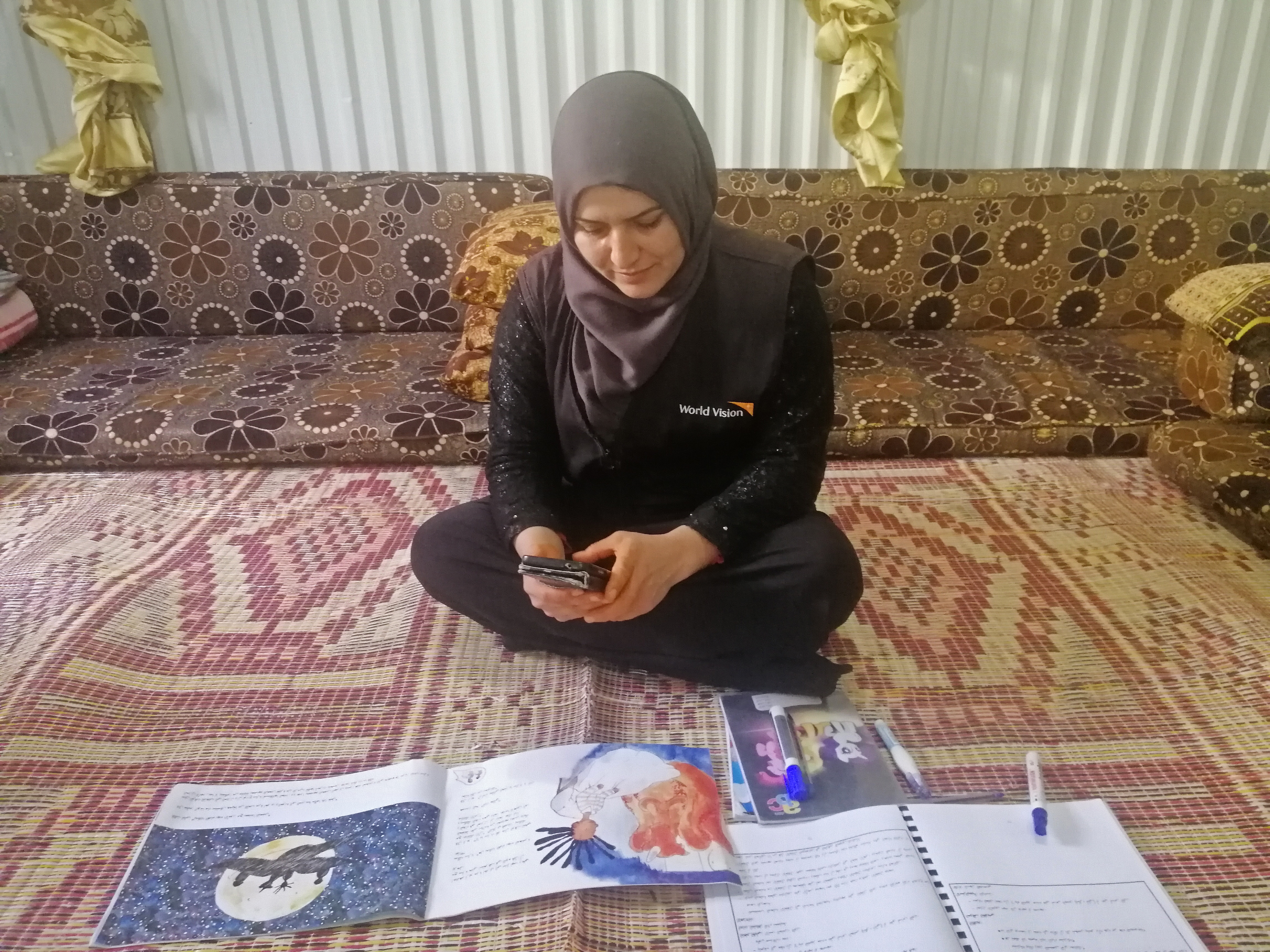 World Vision’s early childhood education centre opened in September 2016, and has been working with children aged four to six in Azraq Refugee Camp ever since. The two centres are located in village two and six with an overall number of 16 classrooms accommodating 25 students in each. In 2019, 2,250 children benefited from the centre’s services. “As many families around the globe face this pandemic, crisis-affected communities are particularly at risk,” says Yazan Elhindi, the Early Childhood Development Programme Manager. “It is now more important than ever for the world not to forget about vulnerable communities.”