Timor–Leste
During the 16 Days of Activism against Gender-based Violence campaign from 25 November to 10 December, World Vision took a step forward to end violence against women and girls in Timor-Leste. We marked the International Day for the Elimination of Violence against Women with activities to increase awareness about gender-based violence in Aileu and Baucau Municipalities. Our new Towards a Future Free from Violence project in Aileu and Baucau aims to reduce violence and increase equality between men, women, boys, and girls. The project is supported by the Australian Government through the Australian NGO Cooperation Partnership.  Spreading voices to end violence in Aileu Municipality 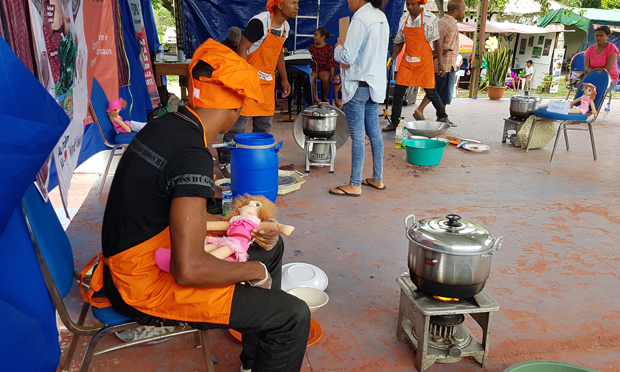 Fathers experienced how much work mothers do at home. Photo: Irim Tolentino/World Vision Fathers in Aileu Municipality experienced being a cook for their families by participating in a cooking competition named, ‘The sound of my shoes’. However, it was not a normal cooking competition. They faced a challenge to not only cook, but wash dishes and clothes and take care of a baby doll. Through this challenge, fathers could understand how much work mothers do in the home to take care of their children and do the housekeeping. They learnt that domestic chores are not only for women, but men too. Sabino, who won the competition said, “I was happy to participate in the event because it taught us how to appreciate women’s work … I learned how to cook at home to support my wife.” 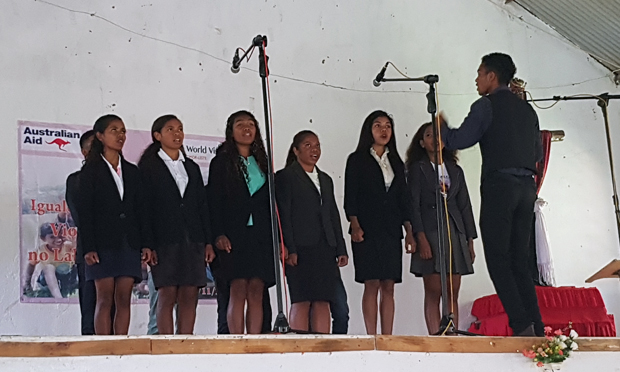 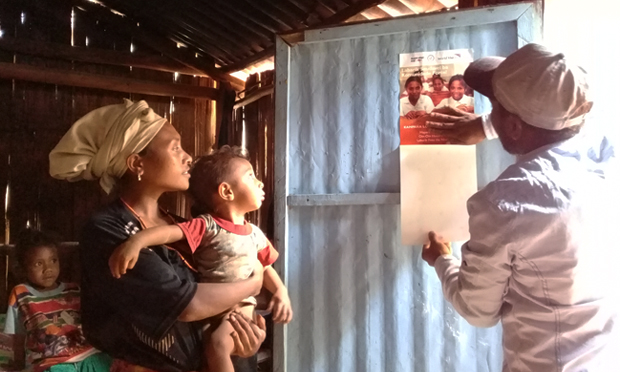 World Vision staff visited households to share information about reducing gender-based violence during the 16 Days of Activism campaign in Aileu Municipality. Photo: Remerio de Carvalho/World Vision
To increase community awareness about gender-based violence, World Vision staff visited families to share information about gender equality and to help them better understand how violence affects people’s lives and where they can access services for help. 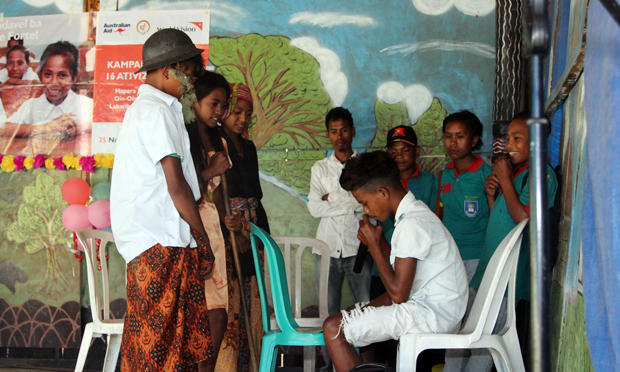 Students enjoyed performing a theatrical drama about gender equality. Photo: Seung Eun Lim/World Vision ‘Men and women have the same rights’, was the theatrical drama performed by students. The play was about a girl with a disability who wished to study at school, but her parents did not want her to go to school but work at home instead. Her parents wanted her to help with the house chores, saying that women don’t need to study. At the end of the play, however, her teacher finally convinced the family that both men and women have the same rights and she deserved to study at school. 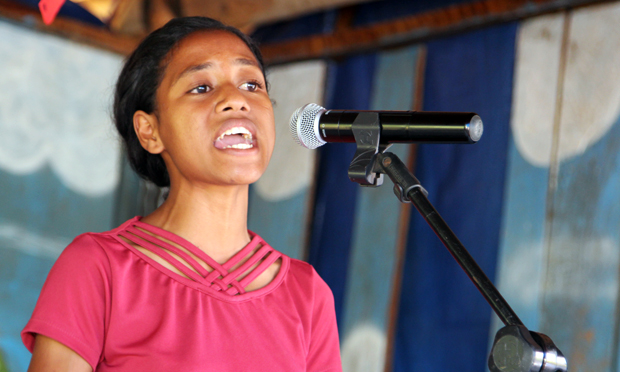 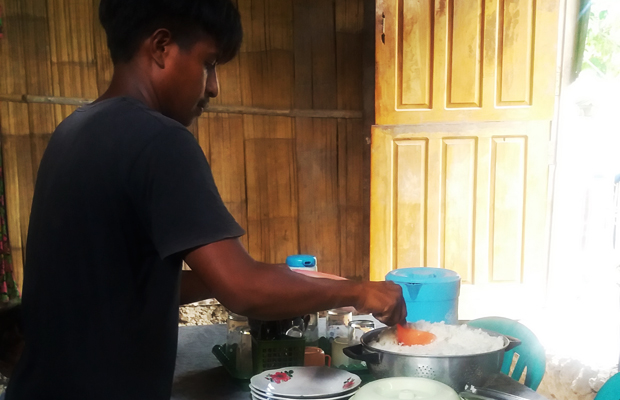 Timotio won the Role Exchange Competition. Photo: Francisca Ribeiro Fraga/Ministry of Social Solidarity in Baucau Municipality A Role Exchange Competition was held on 4 December with five male participants. In the competition, they faced a challenge to cook and clean to show how they can help their partners.  Timotio, husband of Julia, who is pregnant with their first child, won the competition. Timotio used to be a farmer and he didn’t help much with housekeeping work at home. He helped with cooking and washing dishes only when Julia was sick. After participating in the competition, Timotio realised the hard work of domestic chores. He said he used to think house chores were easy because women just stay at home, but now he understands that it is hard work to do.  Timotio was pleased to participate in the competition and he committed to help his wife do the housekeeping when he is at home, as it is not only a woman’s job. 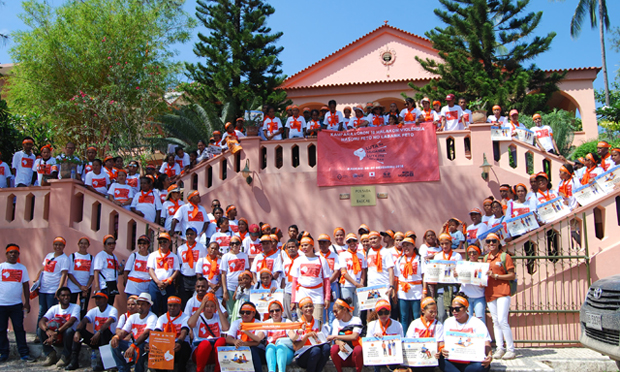 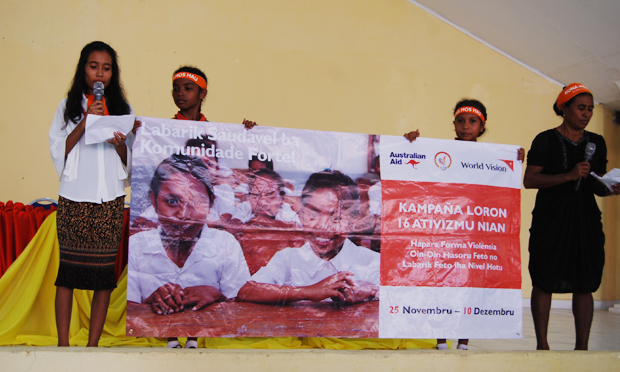 (Left to right) Ana, Novania, Olivia and Anacleta shared a message about ending gender-based violence. Photo: Eldina Januario da Costa/World Vision World Vision invited school teachers and students to join the Long March. After the march, teachers, Ana and Anacleta, and students, Novania and Olivia, recited a poem titled, ‘Hear Me Too’. The main message of the poem was how parents can protect, love, care and support each other and their children to make a happy family. 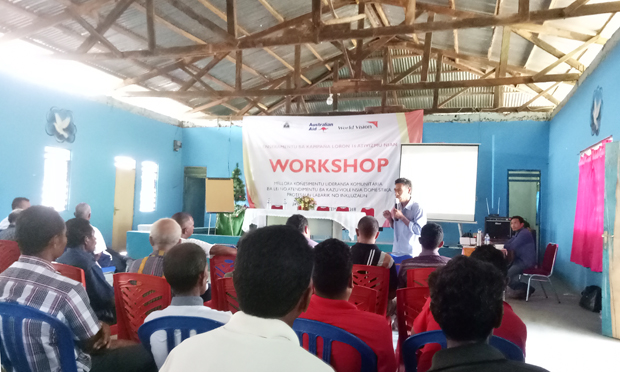