The needle hums, fingers fly and piles of cloth are stitched together at record speed.

“60 pockets an hour,” the 15-year-old behind the sewing machine explains.

Squished inside a second story room with 20 other Bangladeshi women, the girl hunches over her machine while fluorescent lights beam hard overhead.

Bithi is one of the thousands of Bangladeshi children piecing together designer jeans that she’ll never be able to afford.

Abject poverty and a sick father forced Bithi’s family to send the two oldest daughters to the garment factories to sew designer clothes that will be sold in shops in Canada, the United States and other high-income countries.

Bithi is one of the thousands of Bangladeshi children piecing together designer jeans that she’ll never be able to afford.

“The first day I felt bad, I thought it wasn’t good. I was too small. I was surrounded by other older people. That first day, I cried,” she remembers.

In a way, Bithi feels grateful for the work. Her factory is a good one, she says assuredly.

Her boss, 24-year-old Muhammad Shoel Rana, says Bithi is a good worker, and he quickly promoted her from factory helper to machine operator.

“Young people normally are faster, they have good work speed,” he says. His shop is small – sub-contracting jobs from other larger garment factories – and government policies about child labour go unheeded, like in so many other places.

“The wages we’re giving from this factory is not enough, even me, in charge, I feel that,” Muhammad admits.

Still, for Bithi, it’s okay. She says the job has no problems, no fires, a nice boss. When she was injured on the job, a misplaced finger leading to the needle stabbing her and blood spurting around her sewing machine, she was able to take the rest of the day off to heal.

According to her mother, Bithi’s future is an arranged marriage. Her mother already has a man in mind – Bithi’s work supervisor – a man 8 years older and who comes from a well-off family. He's expressed interest, Bithi's mother says.

The girls’ mother, 39-year-old Feroza, is unapologetic about starting her two oldest daughters in garment factories before they were even teenagers.

“There was no food, not even rice. I cry when I remember those days. I thought it’s better for us to die than not to have food,” Feroza remembers inside the family’s one room home where all eight family members sleep.

At that time, Feroza’s husband was bedridden. He couldn’t work. The family was in crisis.

For a year and a half, Feroza juggled domestic work, raised the six children, and ran a bag making business. Still, ends wouldn’t meet. Food was begged and borrowed from charitable family members and neighbours. And then there were the nights when the children cried from hunger – dishes empty.

But it couldn’t be sustained. Feroza knew charity was running out.

So she did what her parents did to her when they arrived in Dhaka decades ago. Feroza sent her oldest daughter, Doli, to work in a garment factory at 12. 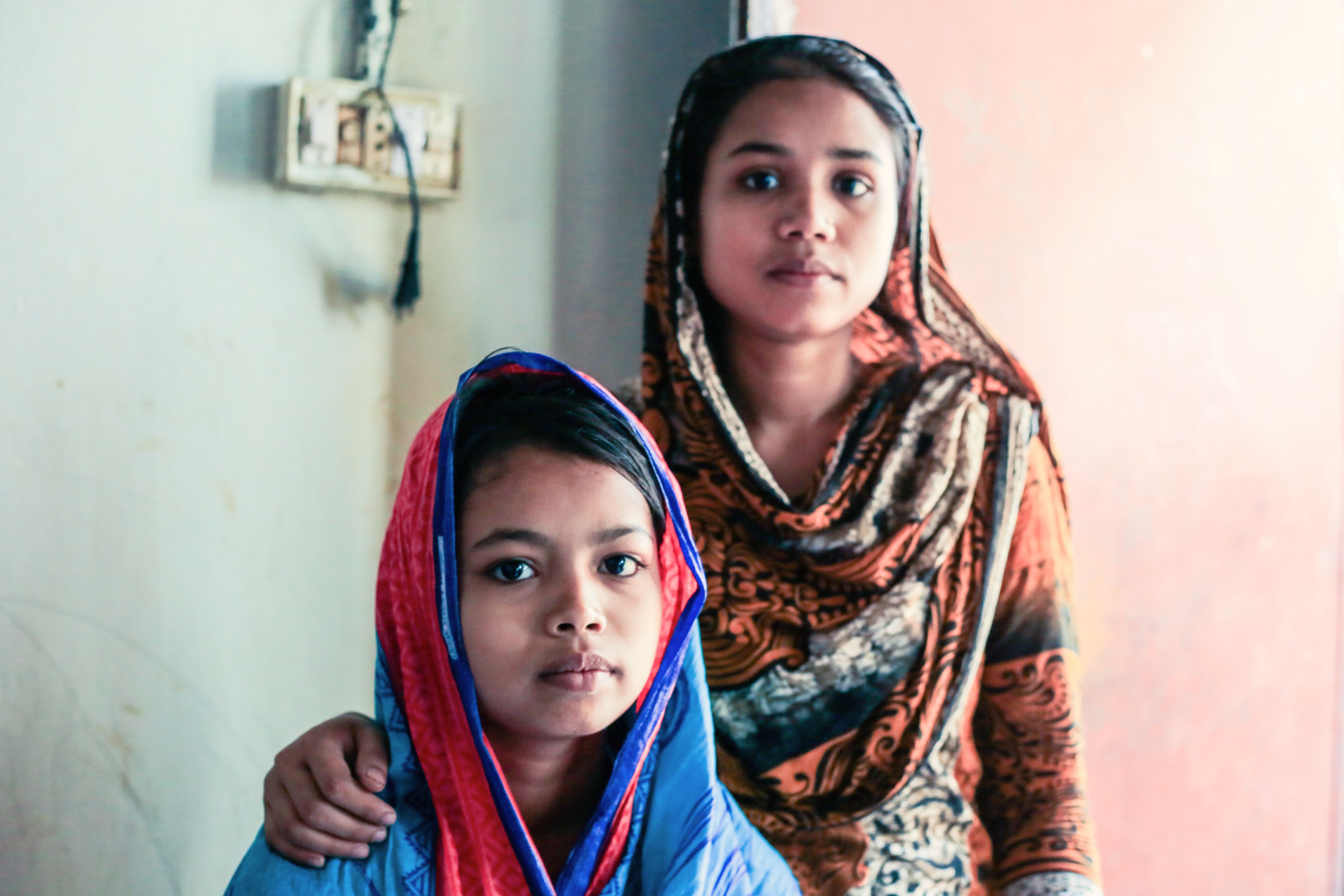 “Before I started dreaming about the future, I started working,” says Doli, now 19-years-old.

And when Bithi was 12, she too was sent to work in a factory.

"As a mother, I feel sad but I still have to be realistic," Feroza says.

Bithi previously attend the Non-formal Primary Education School, part of the World Vision Street Children Project. She used to attend the centre daily on her way home from work. It was the highlight of her day she says.

When Bithi sees other girls her age in their blue and white checkered school uniforms, she admits to feeling “painful, my heart breaks.” She too once had a dream for the future, to be a doctor, but she’s given up on that dream.

"Now I just dream of standing on my own feet," she says.