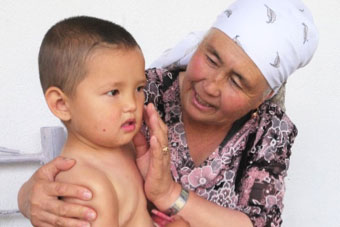 Despite serving as a health worker for more than three decades and being the proud Babushka of 23 grandchildren, Sanovar Partieva still cannot bear the tears and cries of a newborn baby receiving its first vaccine jab.

“Some kids do not even have time to get scared, and I always worry when the baby starts to cry and resist. I still can’t get used to children's tears,” says Sanovar, who has been administering vaccines since 2001.

As a 57-year-old health worker in the feldsher-midwife post (FAP) of Gum-hana, a village of 6,200 inhabitants in Kyrgyzstan’s Jalal-Abad province, bearing the sound of babies’ cries is the least of Sanovar’s burdens.

Many newly trained doctors and other health professionals are leaving Kyrgyzstan for better-paying jobs abroad. An estimated 4-5% of family medicine centres are short of one or two doctors or only have nurses and paramedics.

In these circumstances, the role of the veteran health worker remains critical to the welfare of a village where most people eke out a living collecting and selling walnuts from the surrounding Arstan Bap forest.

Introduced during the Soviet era to provide basic medical and obstetrical services, even to the most remote rural areas, health workers at Kyrgyzstan’s 1,600 FAPs are a primary reason for nation-wide high rate of immunisation.

Despite two revolutions and ethnic conflicts, Kyrgyzstan has preserved a well-organised system of immunisation that has not changed since the Cold War. Today, more than 96 percent of Kyrgyzstan’s population is covered by immunisation.

FAP health workers like Sanovar, who is known affectionately as ‘Auntie’, have become valued members of their local communities -- not least because, outside of her FAP duties, Sanovar’s life differs little from other villagers in Gum-hana.

Despite two revolutions and ethnic conflicts, Kyrgyzstan has preserved a well-organised system of immunisation that has not changed since the Cold War.

Each day, Sanovar rises at six to milk the cow, assemble her milk separator, make sour cream and drive the cow into the pasture. Then, she must attend to breakfast for the 15 family members and guests who have spent the night in her house. There will be tea with milk and freshly baked naan bread, served in a sitting room cooled by the shade of a massive walnut tree that dominates the front yard.

Then, it’s a 10-minute walk to the FAP where Sanovar will spend the rest of her day and has spent every working day for 35 years. She dresses in a crisp white gown and a white kerchief and sits down to look through her log and plan the day.

Every month, Sanovar takes a public minibus to Bazar-Kurgon where she files a report on the vaccinations she has given and illnesses she has treated to the district health centre. Before returning home she picks up the vaccines needed for routine immunisation, which she brings back to the village in a special cooler bag.

In the past three weeks, she has vaccinated 15 infants, six toddlers up to two years old and eight six-year olds.

Her only other excursions are for workshops with other FAP workers – which are held monthly or more frequently, as needed, to keep paramedics up to date.

“When the pentavalent vaccine was introduced, additional workshops were held in the regional centre. It’s a very comfortable vaccine, just one prick,” she says, welcoming the best antidote to her dislike of young babies’ crying.

“One shot in the leg instead of two - it's very good!”

Teaching villagers about the importance of vaccines – and calming their worries about a child’s mild reaction – are important parts of Sanovar’s job.

“Some children become restless and have a little temperature after a vaccine. The mum may get exhausted by this. Then she does not want to do the second vaccination. I make sure I visit them, explain that it is a normal reaction, and I tell them about those terrible diseases - whooping cough, and diphtheria, and hepatitis B - and the terrible complications that can occur. And that by comparison a little fever and tears are really nothing. I persuade, coax and clarify - and they all come back,” she says.

"What would I do if I retired?"

With five children, 23 grandchildren, and a husband who works as a minibus driver, Babushka Sanovar is at an age when she could be forgiven for contemplating retirement.

“But what would I do if I retired? Watch TV or something all day long? I would get tired. And by doing what I do I help people.”

*The original article was posted by GAVI Alliance. You can read it HERE.