For most women, the birth of a child is a happy event, but for many women in South Sudan, it is life-threatening. South Sudan has the highest rate of maternal mortality in the world. 26 women from every thousand women die either in childbirth or shortly after.

In the midst of a civil war, the needs of young mothers compete with food shortages and other more pressing needs for the entire population.

Some of the things that make it so dangerous for women who get pregnant in South Sudan are cultural beliefs and practices that delay the arrival of women at hospital, poverty and a dispersed rural population, which restricts their access to healthcare, and malnutrition, which damages their health and creates complications during pregnancy and childbirth.

FOR MORE ON THIS STORY, SEE THE PHOTO GALLERY

In Kuajok Hospital in Warrap state, World Vision operates the maternity ward. Irma Adhel Kak is a South Sudanese woman who works on this ward. She has been a nurse for 40 years and says that, even though there are many things that are still lacking, things have improved. Back then, she says, “There was no medicine, there were no delivery rooms – just one theatre. Medical work was very limited.”

Nyankiir RIng, 20, can barely sit up straight when she is diagnosed with malaria and a blood infection at the Kuajok Hospital. She is seven months pregnant and is burning with a fever and, as she lies on the hospital bed, she sighs as a nurse applies a cold compress to her forehead.  Within minutes, a drip is attached and she is administered glucose and quinine. Beside her sits her mother who has brought her to the hospital. 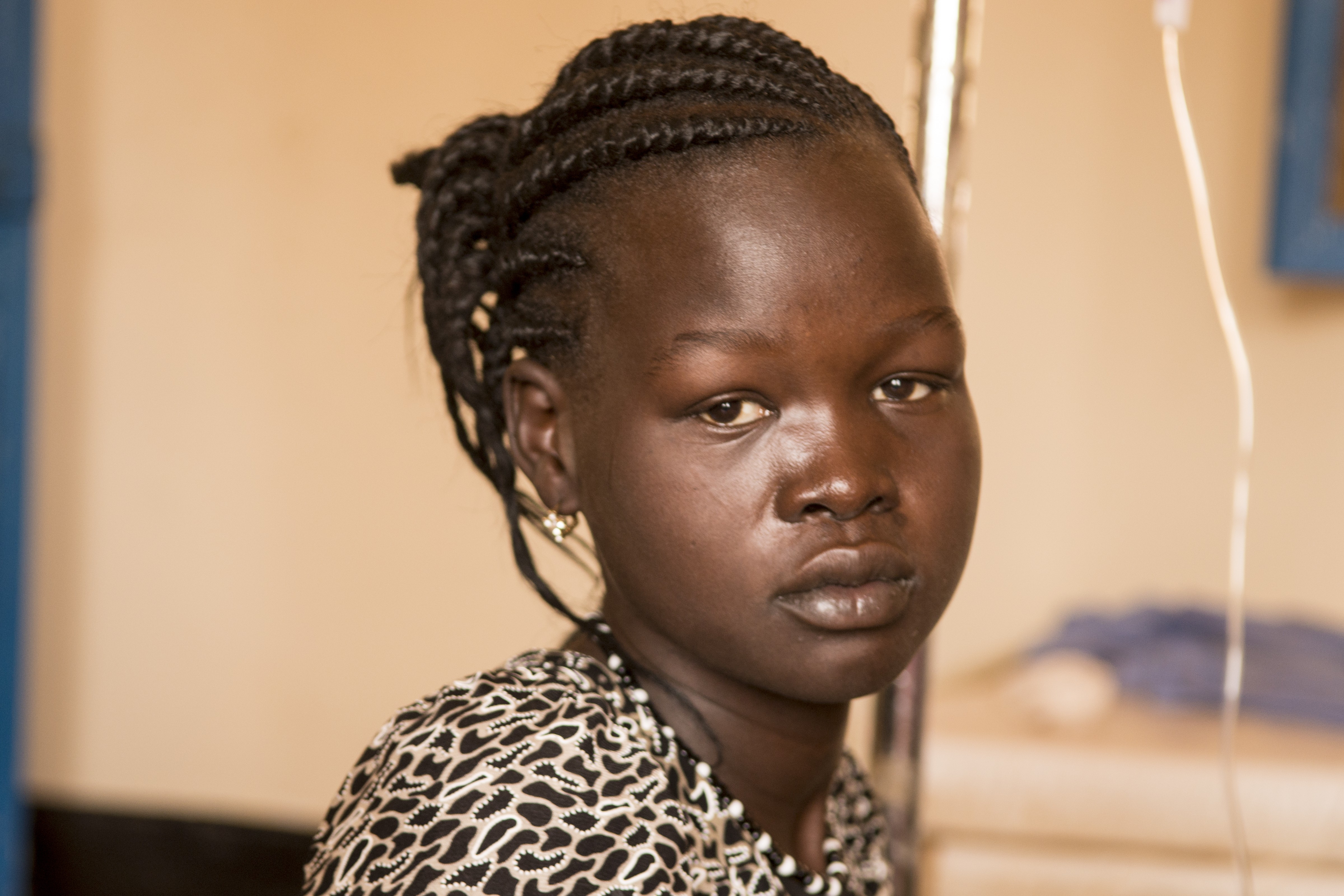 Nyankiir rests at the hospital, after being diagnosed with malaria.

She lives close to the hospital with her mother which meant that, when she fell ill, it was a short rickshaw ride to get help. It’s not the first time she has made the trip. She was two months pregnant the first time she contracted it. Not only is she lucky to be alive, but she is even luckier to have her child still as malaria is a particular risk for women in their first pregnancy as it can lead to anaemia and may can cause complications during childbirth, as well as low birth weight.

no joy with new baby

Nyanut sits on the edge of the bed next to the traditional birth attendant (TBA) who brought her to the hospital. She had been in labour for almost a day when she fell unconscious. She was brought to hospital and now sits next to her tiny baby as the TBA holds him. Although she and her child have survived the birth, their situation is indicative of the neglect of mothers in South Sudan.

She stares sadly and silently into the room when asked about her child.

“My husband doesn’t care about me. It’s good to have children when a husband cares for you, but if you don’t have a caring husband there’s no point in having more children. He doesn’t bring food and he doesn’t pay attention when I am sick,” says Nyanut.

Nyanut is facing a lifetime of struggle and the situation that she and her child are in is indicative of the neglect of mothers in South Sudan.

Not many choices in this country

Marriage and motherhood - sometimes the only choice in this country for women - is fraught with risk.

Dr Edward Ayong Abiai is a South Sudanese doctor. “We are the only clinic in Kuajok. You have to be pregnant when you are fit to do it. When you are sick or have financial problems, it’s not the time.”

Yet neither Nyakiir and Nyanut have a lot of choice in their situation. Both of them left school before finishing and had few options to support themselves other than marriage.

Proper healthcare, nutrition and a cultural change are some of the ways that South Sudan will reduce its mortality rate, but they aren’t easy solutions and will take significant time and resources to achieve. In the midst of a civil war, the needs of young mothers compete with food shortages and other more pressing needs for the entire population.

This means that, so long as the war continues, mothers will continue to die.