Rayani, 4, is the first to raise her hand and answer the question.

“Pineapple!” she says enthusiastically, as her teacher holds up a picture of a fruit. She is correct, and goes on to answer most of the other questions too.

There was a time though, not too long ago, when Rayani could not answer so well. She was underweight, could not speak much and was less energetic. Her mother Dilani, 30, says, “She was not very strong, and used to fall quite a lot while playing. But now there is a real difference in her health and energy levels.”

The secret to Rayani’s improved health is, well, not so secret: it is good nutrition.

However, what is unique is the way nutritious meals have been incorporated into the daily lives of Rayani and other fussy little eaters like her.

World Vision's Mundalama programme area in the North West of Sri Lanka already had an ongoing nutrition programme for children ages three to five years. PD Hearth (Positive Deviance Hearth) is a programme to introduce mothers with children of low weight, to prepare nutritious meals with local food. The initial programme is for 12 days, in which mothers are taught to plan and prepare a special daily menu that incorporates the necessary nutrients within appetizing meals.

Mundalama programme manager Lasantha Premachandra explains, “There is a high incidence of stunting and wasting among children aged three to five in the area, and we try to address this through the PD Hearth programme, but we faced a challenge with its sustainability. So we decided to try out something new by using the core of the PD Hearth programme, its menus, in the daily meal plans for preschools.”

The innovative new approach was introduced to pre-schools within the programme focus areas. Initially the head teachers along with one mother from each school, attended a two-day training. They were given training about nutrition and its importance for the physical and cognitive development of the child, paired with demonstrations on preparing the menus. Next, more mothers were trained in clusters.

“We specifically focused on the mother’s role in this programme,” says Shyama Silva, World Vision’s Zonal Health and Nutrition Coordinator. “Most mothers would send a bun or biscuits for their children’s meals because it was convenient. Through this intervention, we wanted to change their mindset and motivate them to provide nutritious school meals for their children. If nothing else, the children get at least one high-dense meal a day through the food they eat while at school.” 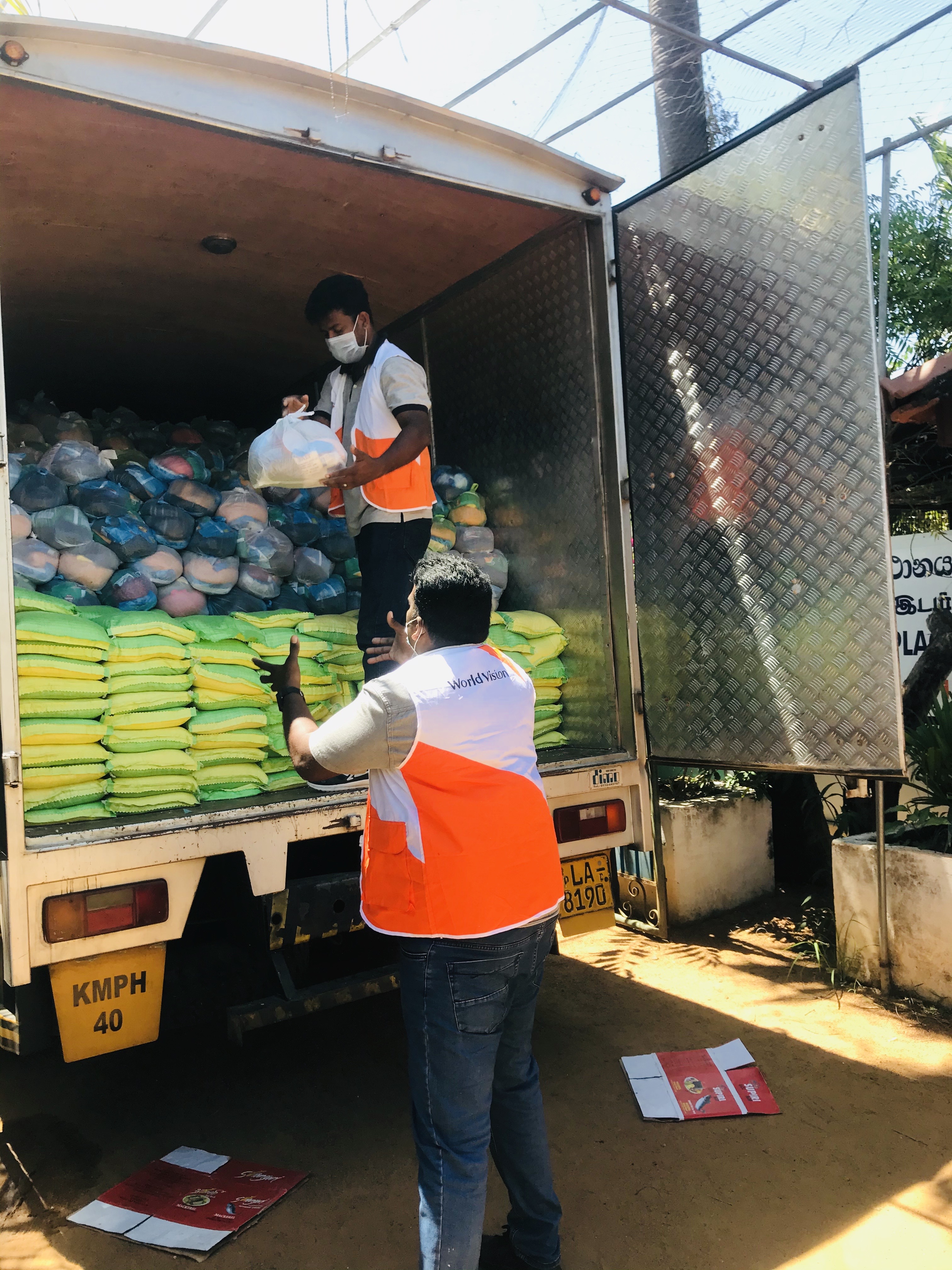 The teachers understood the importance of the programme and were very enthusiastic to implement it in their schools. The mothers? Not so much.

“We thought it was a nuisance, an additional thing we had to do,” admits Chamila, 30, one of the mothers in the programme. “The children ate the meals we prepared for the rest of the family.

We didn’t really think about preparing anything different with their nutritional requirements in mind.”

However, Manoji Santhiago, 46, teacher at Pubudu Preschool in Mundalama, had other plans. “I took a stand, I didn’t cave in,” she says firmly. “The mothers resisted at first and I even got scolded, but I made sure they understood the importance of being part of this initiative for the sake of their children.” 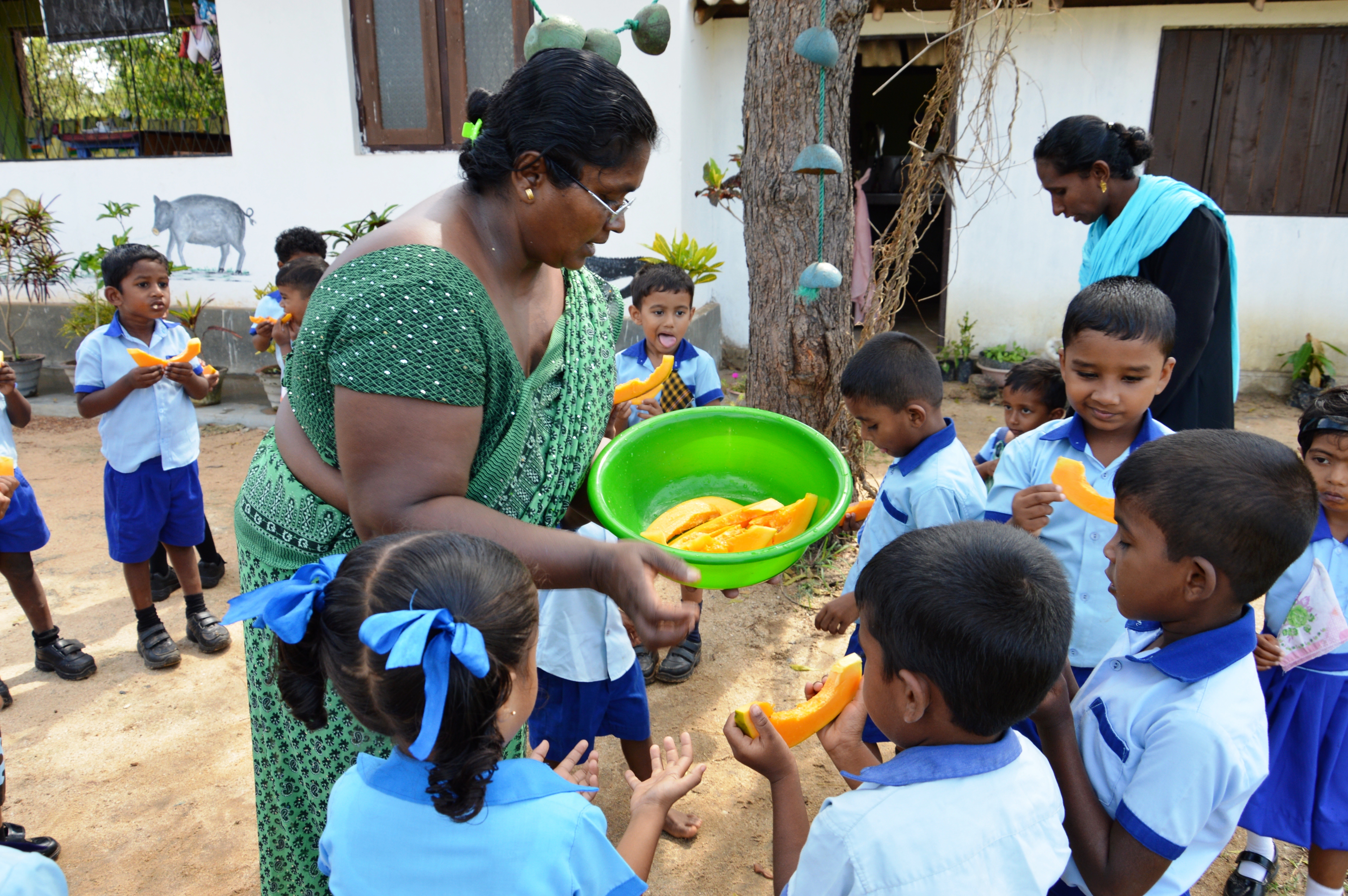 The mothers were soon convinced and committed themselves to the programme, taking part in the training sessions organized by World Vision.

For 21 days, the teachers and mothers got together and cooked at the school. Each school day had a special menu ranging from nutritious yams, noodles, rice, roti (flatbread) and other local meals. In addition, the mothers learnt to make soup and other meals for dinner using the very same ingredients.

“The ingredients and vegetables are not different; it’s what we eat every day.

The trick is in the preparation of healthy meals,” says a smiling Manoji. “We worked with the mothers to vary the food and make it appetizing. The children have no clue they are eating those same vegetables that they fussed about so much.”

If there were any lingering doubts about the convenience of the programme, they were cleared after the initial 21 days. “The weight of all the children improved and that was all the proof the mothers needed to really commit,” says Manoji.

The nutrition programme is currently being implemented in 15 pre-schools in the Mundalama area.

The mothers of each school now work on roster and have divided the preparing of the meals amongst them. “We add chicken, eggs, fish and pulses, with vegetables. We were also taught to cook with cost-effective alternatives such as soya meat instead of meat, pumpkin and string beans instead of carrots and beans which are expensive here,” explains Dilrukshi (30), a mother. “Through the demonstrations, we also learnt how to use dried sprats and shrimps to make a powder that we made ourselves, and this enhances the taste. So nothing artificial is added to the food; everything is organic and very healthy.”

The list of ingredients is the same for the entire week, so there is no additional cost. “Now, we think before we prepare any meal,” adds Dilrukshi. “I no longer just cook these meals for my youngest only; even my two older children have the same meals. They are so nutritious and tasty that now the whole family enjoys these meals.”

To support the programme further, World Vision has also provided training to the teachers to measure the height and weight of the children each month, along with the necessary equipment. “We keep good records and a chart displays the names of each child, so that we can monitor the progress of the child,” says Manoji. “Now, when a new child enrolls at the school, we first check their height and weight and we chart it, so that we can monitor their progress from day one.” 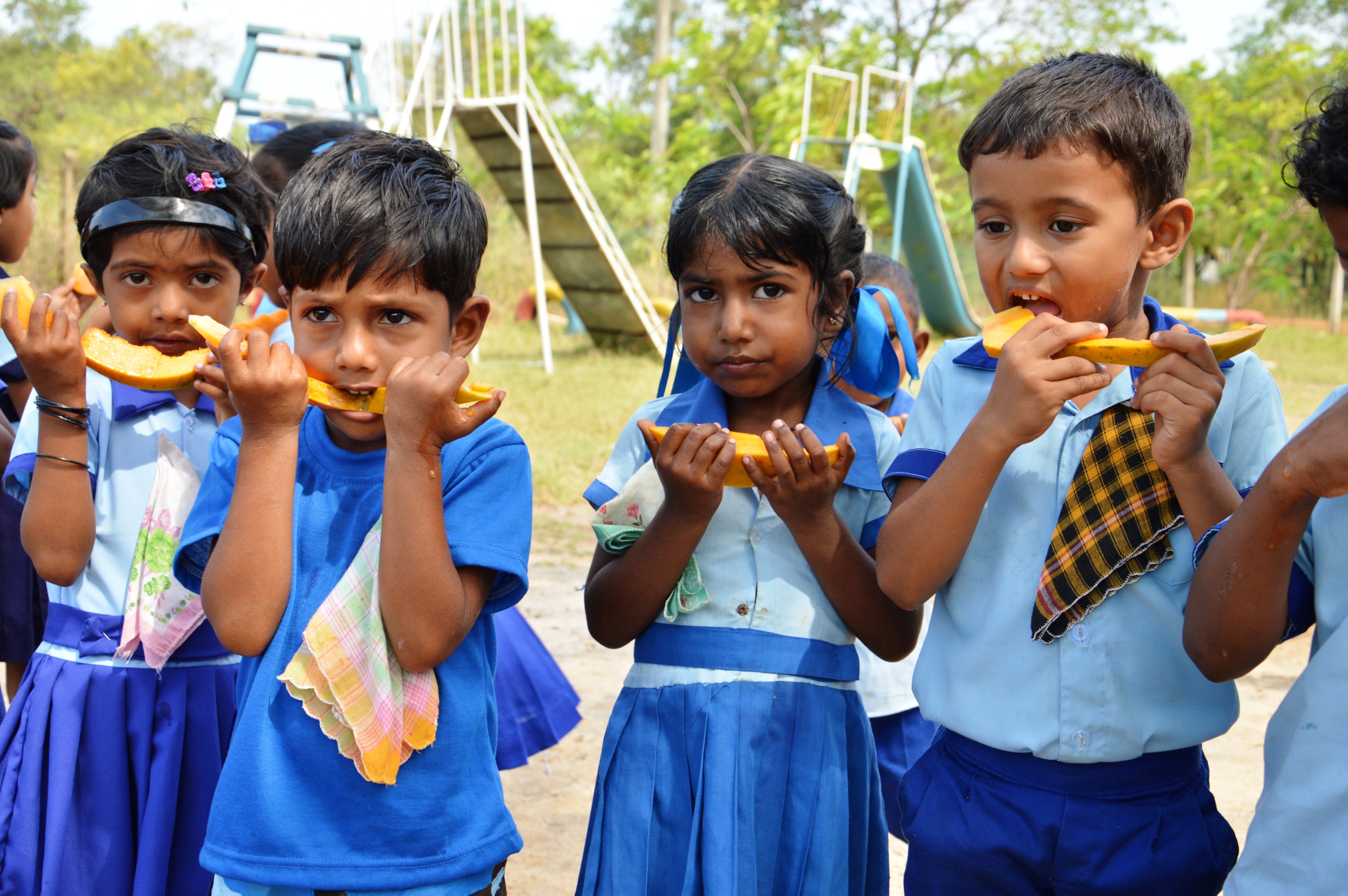 The proof of the programme’s impact is confirmed by none other than the local midwife, who weighs the children at the pre-schools, which usually also double as weighing centers for the village.

The children are thriving, and clearly they have abundant energy to learn and play.

“The midwives have seen the impact of the programme,” adds Chandana Jayaweera, Development Facilitator at Mundalama ADP. “They visit the school every three months, and they have noted a real improvement in the children. One of them even spoke of this intervention at a conference for Government Health Officers, and we are receiving greater support from them for data collection because of it,” continues Chandana.

The children are thriving, and clearly they have abundant energy to learn and play. Mealtimes are easier and the children usually finish all that is served, finishing off with fruit which is also supplied by the parents. The cost for the meals and construction of kitchens in some pre-schools is borne by the CommunityBased Organization (CBO), through a World Vision led programme which also involves the School Development Societies in Mundalama. The CBO raises funds which are matched by World Vision, and these funds are used for the development of the preschools and the implementation of the nutrition programme.

“This way, the parents get involved in the activities of the pre-schools and they are able to engage with the nutrition programme as well, ensuring its sustainability. This programme has been only implemented for one year so far, and we are amazed at the results,” explains Lasantha Premachandra of World Vision.

“Since I have been monitoring the children, I can see a huge difference in them since last year. They are able to retain so much more of what they learn daily and they enjoy school. Their charts show their health improving as well,” says Manoji with a proud smile.