When 17-year-old Bereket did not show up at daybreak, her girlfriends, waiting a few steps away from her doorstep, trod toward the back of her bedroom as lightly as they could and whispered her name. Awakened, she fumbled in the dark room for her 44-pound jerrycan, wrapped a shawl around her head and neck, and sneaked out.

The electric wire that Bereket’s family rerouted from the mainline often goes out in heavy winds and the household falls into darkness four days a week. Electric supplies have always been dwindling, leaving the family without light, and Bereket has felt the impact strongly.

"I had a hard time waking up from deep sleep because of the energy I lost every day walking for hours carrying a water-filled container", she says. 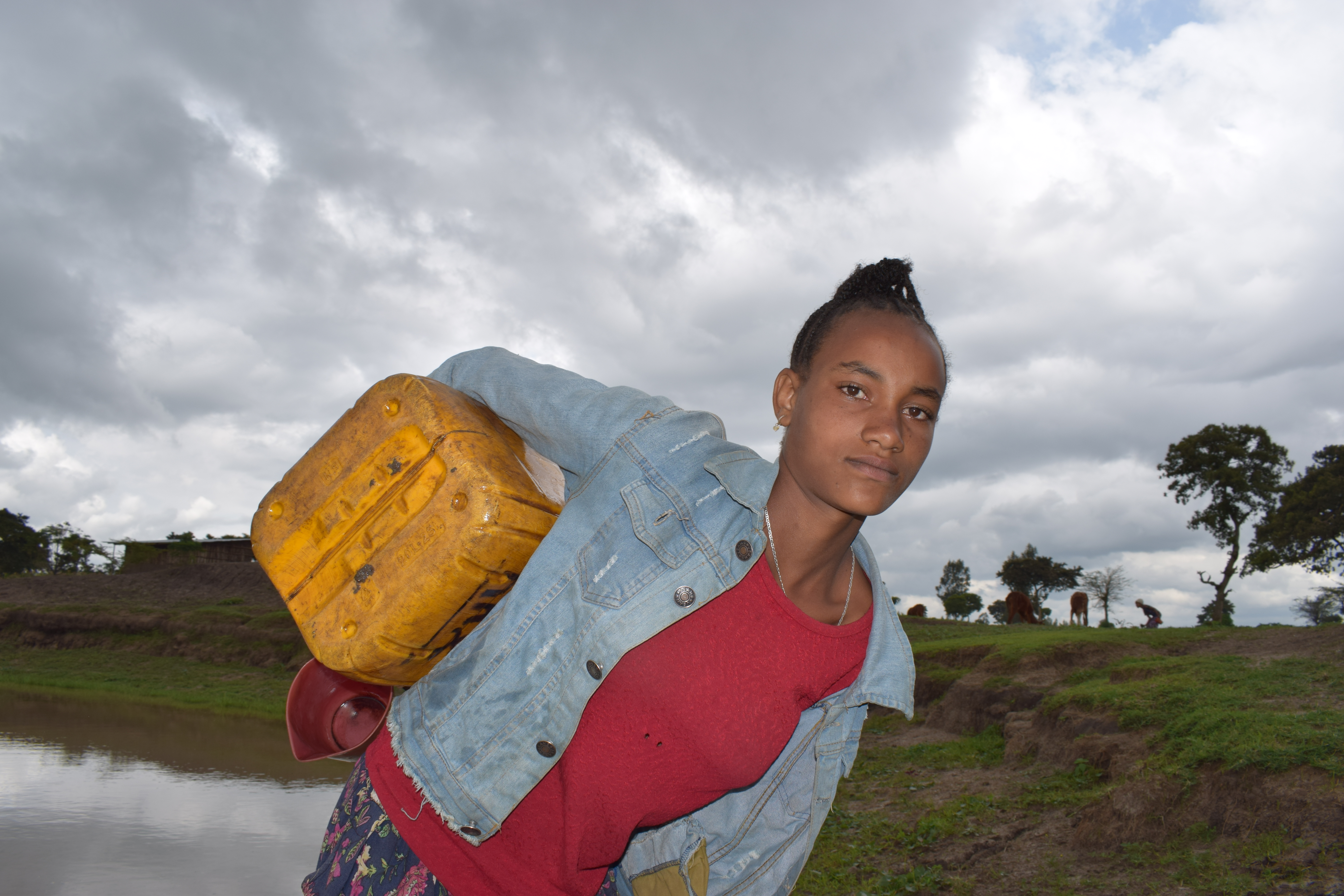 Slinging the container by a strap across her back to the opposite shoulder, Bereket started a one-hour stride with Almaz (14) and Nada (13). The trio hurried, giggling in a bid to ward off chilly morning air, get home quickly and arrive at school in good time.

Bereket knew that if she arrived late, she would be denied entry and a long absence would result in expulsion. She was aware of the result of expulsion and tried her best to avoid it, but was hardly successful. Many a time, she was kept out. She, however, did not lose hope. 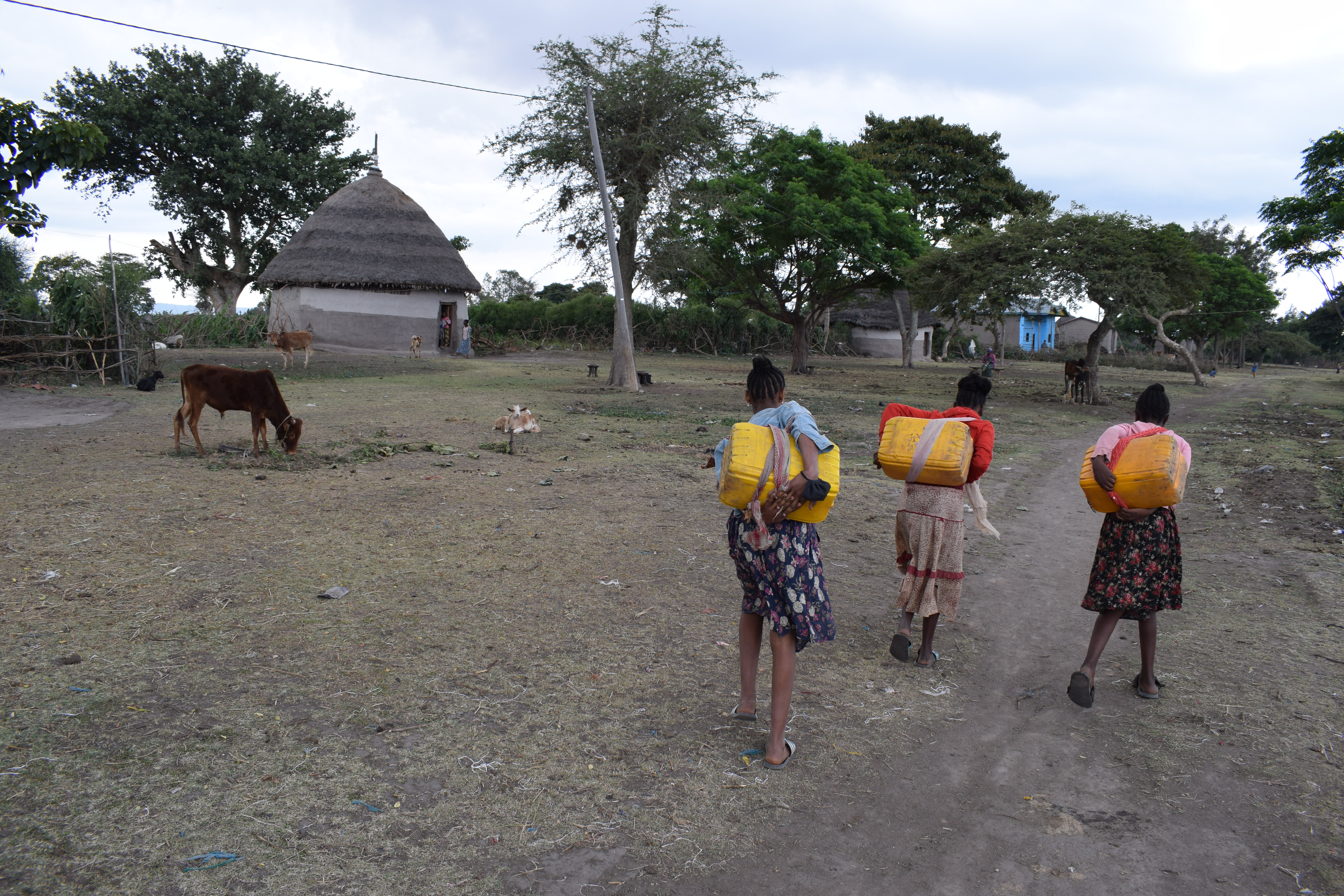 "I was very angry at the security guard but did not say a word. I walked back home feeling despondent", she remembers with indignity.

As tradition has it, the fifth child, Bereket, felt she was predestined to provide water for her family. She believed her younger sisters would grow up to her age and take on the responsibility to relieve her. "Only then would I get respite, attend class regularly, focus on my education, and have spare time to attend Sunday School classes and rehearse songs", she says.

Bereket fetches water from an open pond, 6 kilometres or 3.75 miles away from her home. The man-made pond is the only source available for both people and livestock in the mainstay of Dada community. Nocturnal wild animals like hyenas, foxes, hedgehogs, and porcupines also share the water. "It is scary and repulsive to think that we share the resource with them", says Bereket.

She walked two hours to and from the unprotected source and yet it was not enough for a large family of 11, who use it for drinking, washing dishes, and laundry. The family cattle, goats, and baby calves, which are tethered to posts around her decorated thatched-roof hut, also drink from the hard-earned water. The brown-yellow pond has sickened Bereket several times, forcing her to visit health clinics to get treatment for waterborne diseases such as giardiasis, hookworm, and amoeba. Prior to letting her youngest siblings drink, she always tells them to wait for a while until the silt in the muddy water settled out.

No matter how hard she tried her best to provide them with the available resource, Bereket's siblings could not be spared from the water-borne diseases either. Some better-off households in her neighbourhood with tin-roofed houses collected rainwater through the eavestrough and did not need to go to the pond during the rainy season.

Unfortunately, Bereket’s family’s thatched-roof house, situated in a cozy hamlet where village children carolled blithely in communal spaces, could not alleviate her burden. Gutters cannot be attached to straws to collect and store rainwater for drinking or other uses. Thus, Bereket had to go back to the pond when her shift changed from morning to afternoon.

"I got my schoolbag off, grabbed the jerrycan, which I considered my inseparable ‘mate’ and hurried to the source sometimes alone", says Bereket. The daily four-hour walk affected her attention in school. "While class was in progress, I sometimes slumbered and a girl sat next to me and taciturnly nudged me. I woke up confused and couldn't shake off that feeling for a long time", Bereket says, looking to the side with a smile. Her poor grades prompted her many a time to drop out, but a sense of fear engulfed her with that thought. She knew what a being teen girl dropout would dictate. “My abhorrence of early marriage made me do whatever it took to avoid it”, she says.

Bereket’s age defined her role as a provider and the beating sun and pouring rain did not deter her from discharging the responsibility that she took on at the age of 12. As she trudged in a rain-soaked crop field and a muddy alley, she tripped and fell down, the jerrycan still on her back. She was worried about the amount of water she would use to wash the mud off her and the time required to do so. She fell into despondency, resisting the thought that life is a gift. She could not hold to a hope that there was a better life beyond the horizon but only focused on the grinding poverty. "The ordeal debilitated my vision", Bereket says, grimacing. She lacked the precious commodity the Creator has endowed all for free.

Falling through the cracks

Water scarcity is common in Dada village. An educational institution like the primary school where Bereket was in her sixth grade, did not have tap water and it disrupted teaching and learning progress. Tamrat Makaro, the primary school head says, ‘‘Amidst an ongoing class, small kids asked permission to go home to drink water and return, but they did not. We neither barred them from leaving class nor provided them with the very basic need. We had to take the bull by the horns.’’

Every Friday, students were teamed up to take water to school from their homes to clean up their respective classrooms. Bereket had to abide by the instruction and took the water she carried home from the pond. It was all in one.

Dada community faced a chronic problem that existed for time out of mind. The legacy of trauma was passed down from generation to generation, and the local government could not entirely fathom its community’s gnawing pain. The village is located in the Shashogo district, in southwest Ethiopia. It has a population of 149,000 that depends on rain-fed agriculture. The farming community grows various types of crops and rears farm animals for plowing and livelihoods. Community children, mostly boys, look after cattle and many school-age children did not go to school. Traditionally, female family members, especially girls, bore the brunt of life doing house chores in addition to fetching water. Women and girls in Dada village spent an estimated two to four hours hauling water every day. They are sole caretakers of minors and had little time for themselves or to focus on their education. Life has always been grim for rural girls. They were not able to taste the enjoyable moments that childhood offers.

World Vision, a child-focused humanitarian and development organisation, which has always been at the forefront to respond to vulnerable children’s felt needs, could not wait until Bereket’s sisters grew to bear the brunt of the vicious cycle. In its concern for the safety and well-being of needy children and their families, World Vision decided to assess, identify, prioritise and address the community’s urgent needs. A team of technical experts from the Water, Sanitation, and Hygiene (WASH) Division drilled a borehole in Dada village.

Bereket could not believe her eyes when she saw a drilling rig cutting to the ground and spurting water on the surface. It was a hard-to-believe phenomenon for her but she had to wait until she would see clean water running into her jerrycan. She remembered seeing a faucet for the first time when she went to a town market with her mum. "If it was going to be constructed in my village one day, it’d be a marvel, I thought", Bereket recollects.

The WASH team completed the installation of a water tap structure and handed it over to the district water office and beneficiaries of the project to jointly administer and take care of it. "There was jubilation and hurrahs moment in the village", Bereket remembers. She says it was surreal for everyone, especially for her and her two friends, Amaz and Nada.

‘‘We have nothing to complain about anymore”, says Almaz, one of Bereket’s two friends. “I told myself to let bygones be bygones. From that time on, we started life without a challenge because of World Vision’s support!" 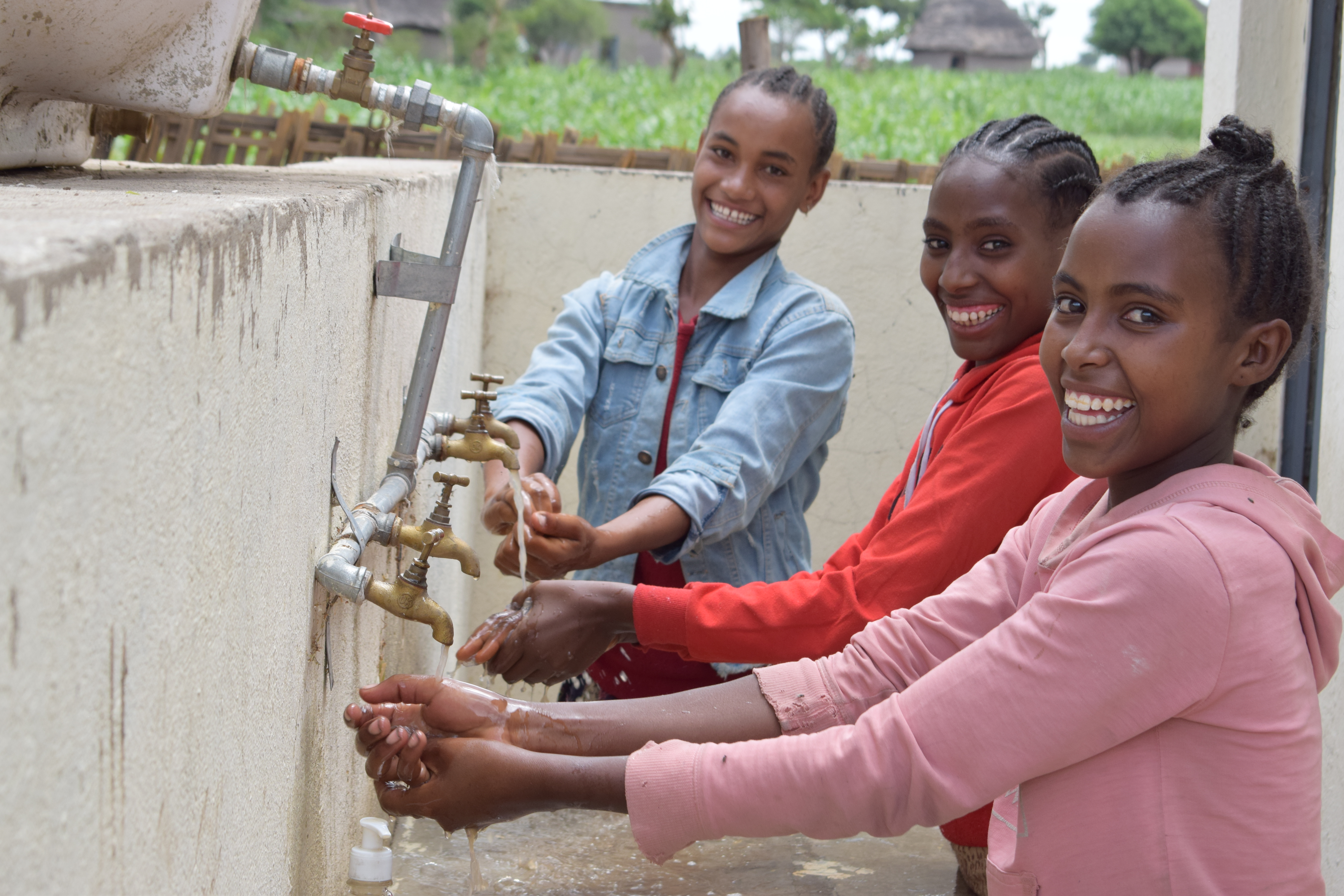 Things eventually started to take a turn. The gravity of the ordeal has become history. A water point with four faucets is located near Bereket’s home serving her and 1,600 beneficiaries in Dada and beyond. The faucet she had seen once in the town is at a pointing distance now. She sees it as a miraculous intervention.

‘‘I envisaged such a time like this: a time when I would draw water from a faucet myself, stop walking a long distance every day to the disgusting pond and wear out completely, and arrive at school in time, have enough sleep, study with fellow girls and live a happy life", Bereket says with a sigh of relief. She believes that World Vision has put her in a comfort zone and she is still amazed. Her friend, Nada, says, ‘‘I thought that getting potable water at a close range was impossible in my lifetime but it is here and real.’’

Now that Bereket doesn’t need to wake up early and walk for hours every day to a dirty water source because she has tap water located a three-minute walk from her home, she will not miss classes or arrive at school late. She is no longer sick of waterborne diseases, for she drinks from a tap. And she is living life to the fullest. 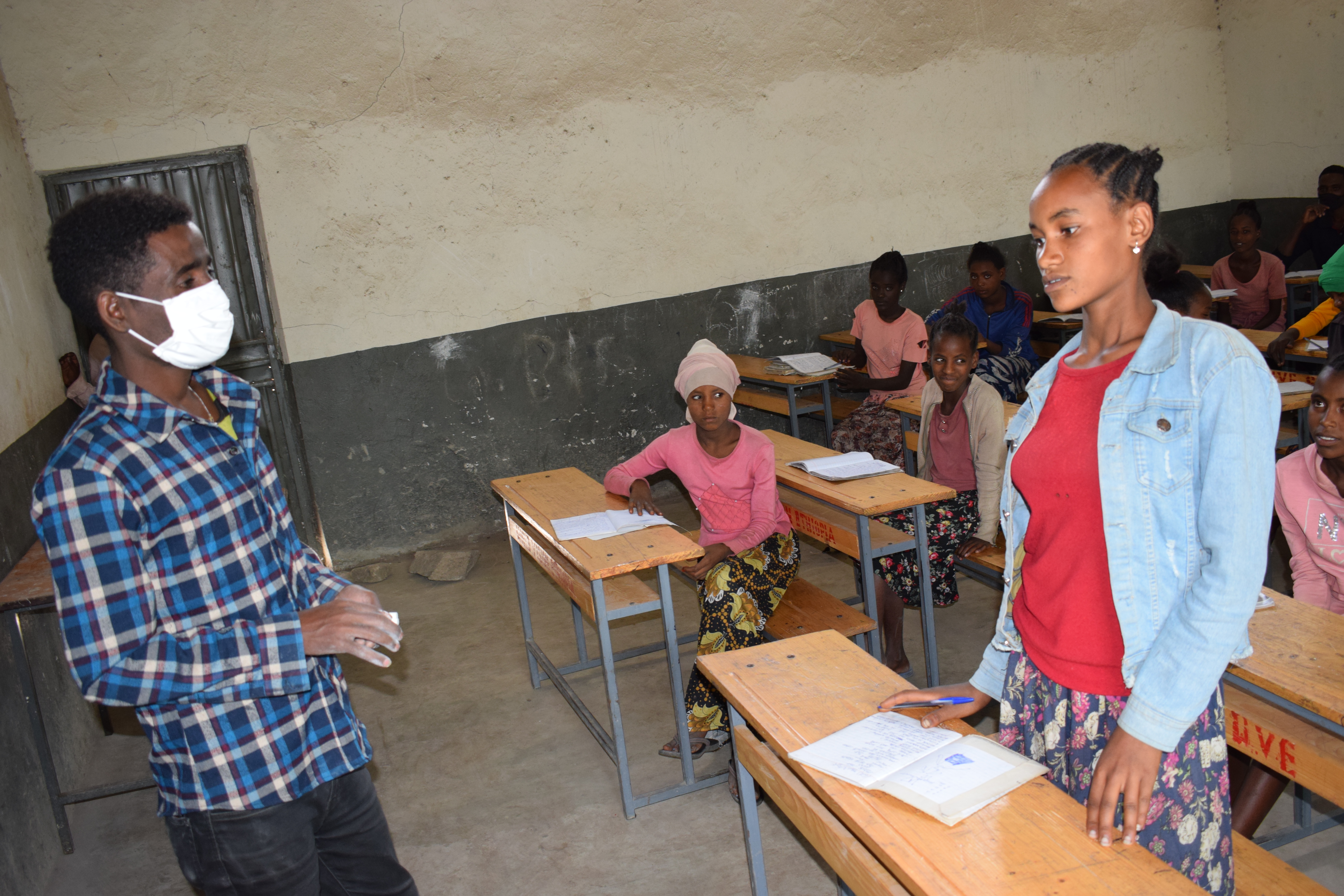