Angelo lost almost everything he had ever owned on August 15, 2016.

“When you are in a dangerous situation, you run. You forget about everything because life is the most precious”, he says.

He, his wife Viola, and their young children escaped South Sudan at eight o'clock at night, under the cover of darkness, in order to escape from imminent death in one of their country’s bloodiest conflicts. The family walked 60 to 70km to the border with Uganda. The images of death along the way will stay with Angelo forever.

When they arrived in Uganda, the family was given a small plot of land from which to begin their new and uncertain lives in a new country. They were one of the first refugee families to live in what is now one of the largest refugee settlements in the world—Bidibidi.

Now in his fifth year in the settlement, Angelo is a known leader in the community—a church leader, child-protection committee member, a refugee welfare council leader, and a foster father; but what he considers to be his most important role is that of a loving family man.

“People in the settlement look at me and my wife and wonder why we never fight. They admire us and even think we are rich”, he says, amused.

“Angelo is a very kind man. He accepted me in his home and takes very good care of me. I eat a lot of food here—not like back then when I stayed with my grandmother”, says 13-year-old Brian, Angelo’s fostered child.

Angelo attributes the relative calm and happiness in his household to two things: God and food. Although almost a quarter of a million people receive food from World Vision and the World Food Programme in this settlement, Angelo’s perspective of food is different from others'. To him, food is much more than just a meal.

“Food is better than all other things because food brings unity. People eat together. Once you are satisfied, you can cooperate with others. It stops quarrelling and domestic violence”, he says.  Angelo is a conflict resolution expert in his community and he says when food is available and enough, his services are not in high demand because households are at peace.

“When men fail to provide food for their children, they get angry with themselves, with the wife and with the children. This triggers a lot of fighting. This happens a lot [on] the days when we face hunger crises in the settlement given the continued ration cuts", he explains.

Clinging to his old motorcycle to bring the food home 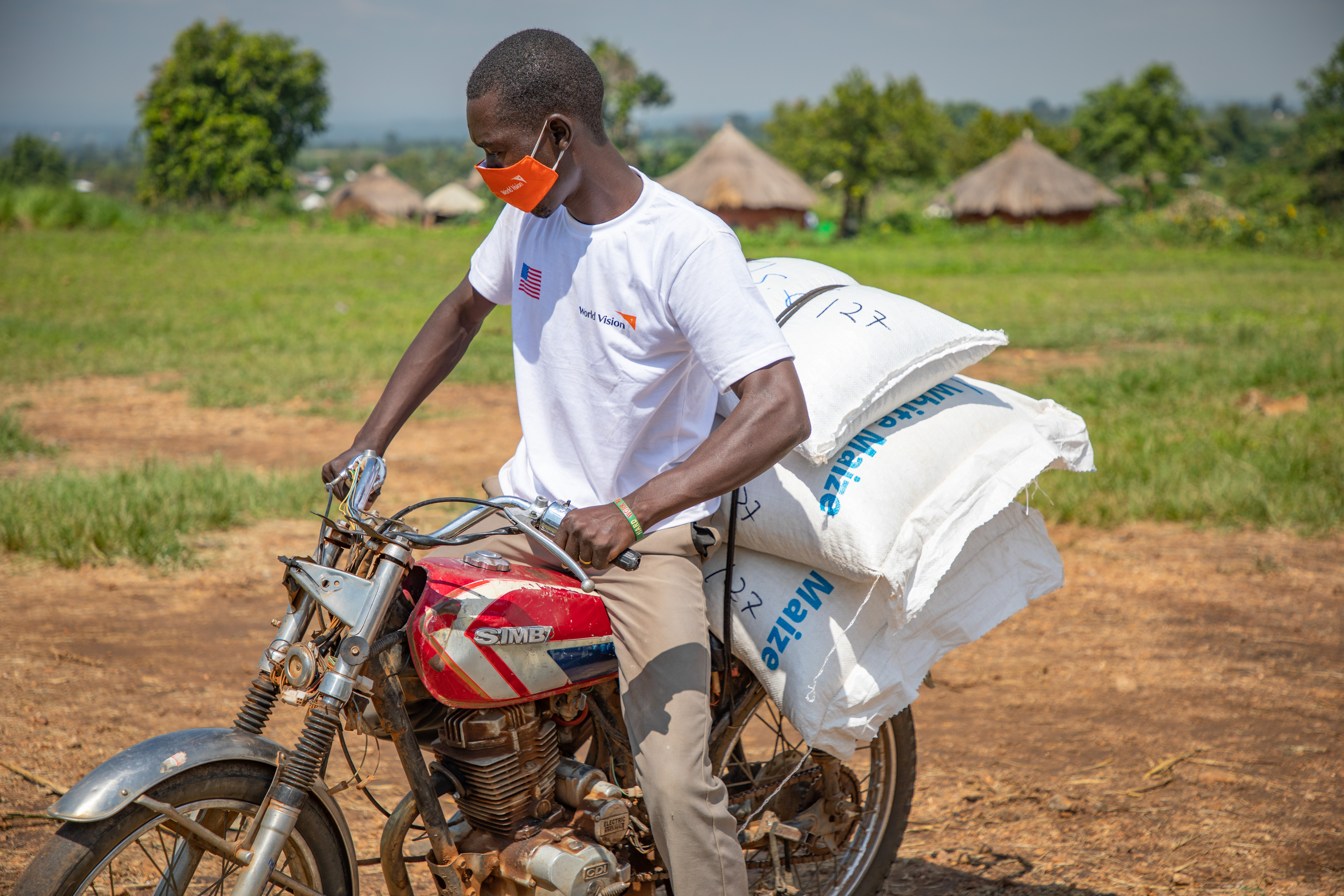 Every food distribution day, Angelo, often in a white T-shirt that he wears whenever there is something to celebrate, wakes up early with the rest of his family. The children smile at the morning sun as it announces the arrival of a new day—a distribution day. On everyone’s mind, one thing is certain: There is going to be plenty of food to eat today.

Angelo and Brian, his fostered child, start by ensuring that the motorcycle in in great shape, lest it will be hard to carry the food home. Busy like bees, they screw and unscrew one nut to another. On opening the fuel tank, Angelo beholds it empty. He dashes off to the shops to buy fuel.

As soon as the mechanical checks and fuelling are done, Angelo sets off to the distribution point, about half a kilometre from his home. Unlike many men in the settlements, Angelo doesn’t mind picking up the food from the distribution centre himself.

“A lot of men here think that picking food is a woman’s job. That is why there is a lot of women at the distribution points, but for me, I don’t mind at all. My wife can always pick it whenever I am not around”, he says.

At the food distribution centre, a dedicated team of World Vision and World Food Programme staff and volunteers are waiting to serve Angelo and some other 2,000 people who will pick up their food from this particular point today. Just like everyone else, Angelo is receiving maize grain, beans, vegetable oil, salt and soap. Each member of his household is allocated about 7.5 kilogrammes of food.

“As a precaution against COVID-19, we have resorted to pre-packaging the food so that the people we serve just pick it up quickly and move. We are also giving out double rations food, which means giving two months’ worth of food in one go. This helps us to avoid frequent visits to the distribution points”, says Annitah Atwiine, the Food Assistance Officer at World Vision in Uganda. 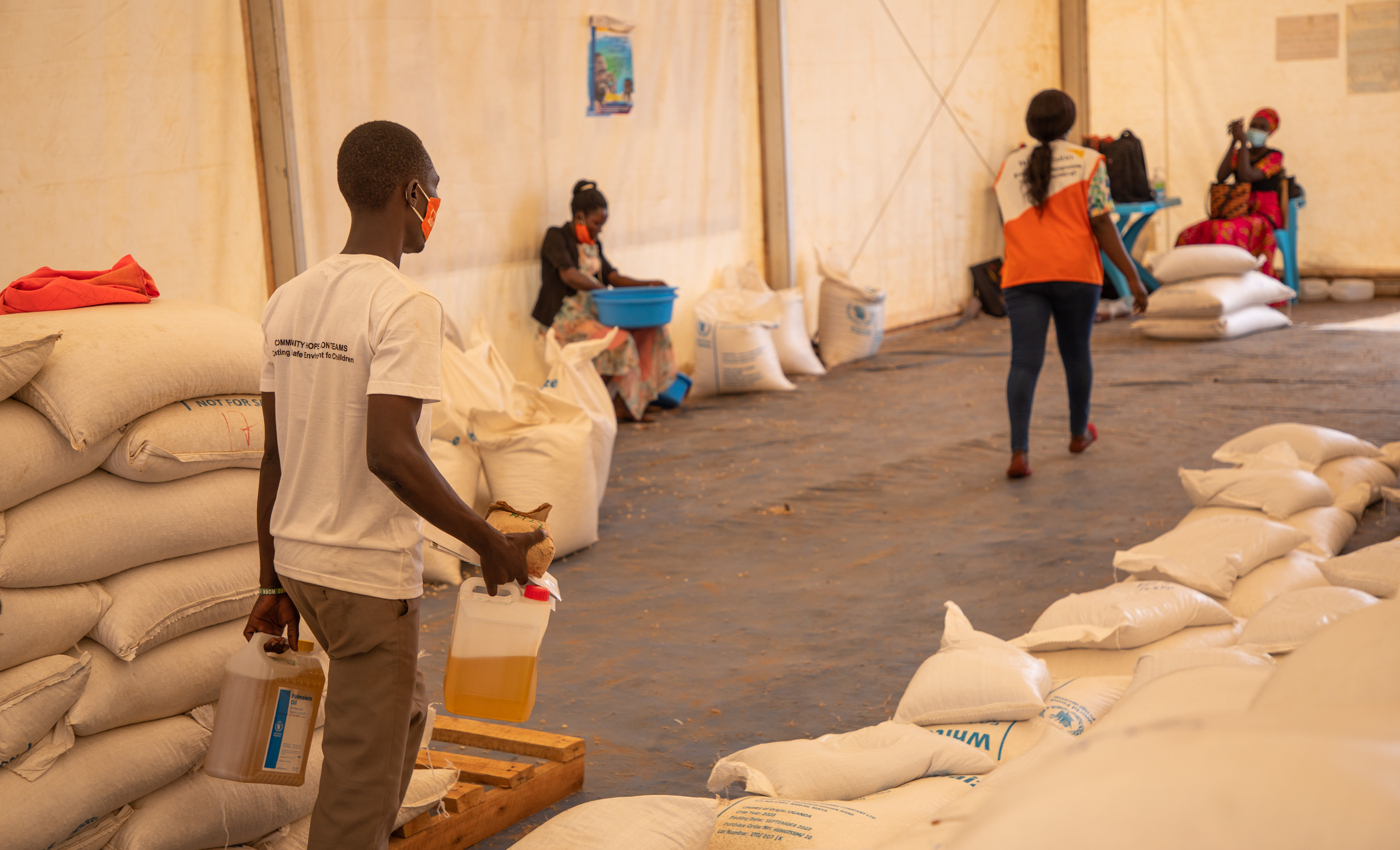 After collecting all his food items, Angelo is aided by one of the workers at the distribution point to load it onto his motorcycle. As he starts to move, the motorcycle staggers and the engine dies. He starts again and this time it vrooms off. The visibly overloaded motorcycle goes off the road a few times as he struggles to keep it in a straight line. As the negotiations between the motorcycle and its owner continue, Angelo takes a number of breaks and pauses between rides, before gearing it up again. This goes on until he reaches home.

From a distance, Brian and Viola, and the rest of the children can hear the roaring of an old motorcycle; an indication that Angelo is on his way back with the much-awaited food. As he arrives, they jump with joy and help to offload the food. The children are so happy and straight away start playing on top of the food bags with the joy and hope of an assured meal for the day.

Angelo takes pride in his motorcycle and this is why when he failed to carry everything while fleeing South Sudan, he at least clung onto it all the way to the border.

“I got this motorcycle from my brother in South Sudan. We cherished it back at home and this is why I fought so hard to bring it up to Uganda. It now helps me get food, but also do my other work in the community”, he says. Sometimes, Angelo uses this same means of transport to transport food for persons with special needs in his village, like the elderly and people with disabilities. 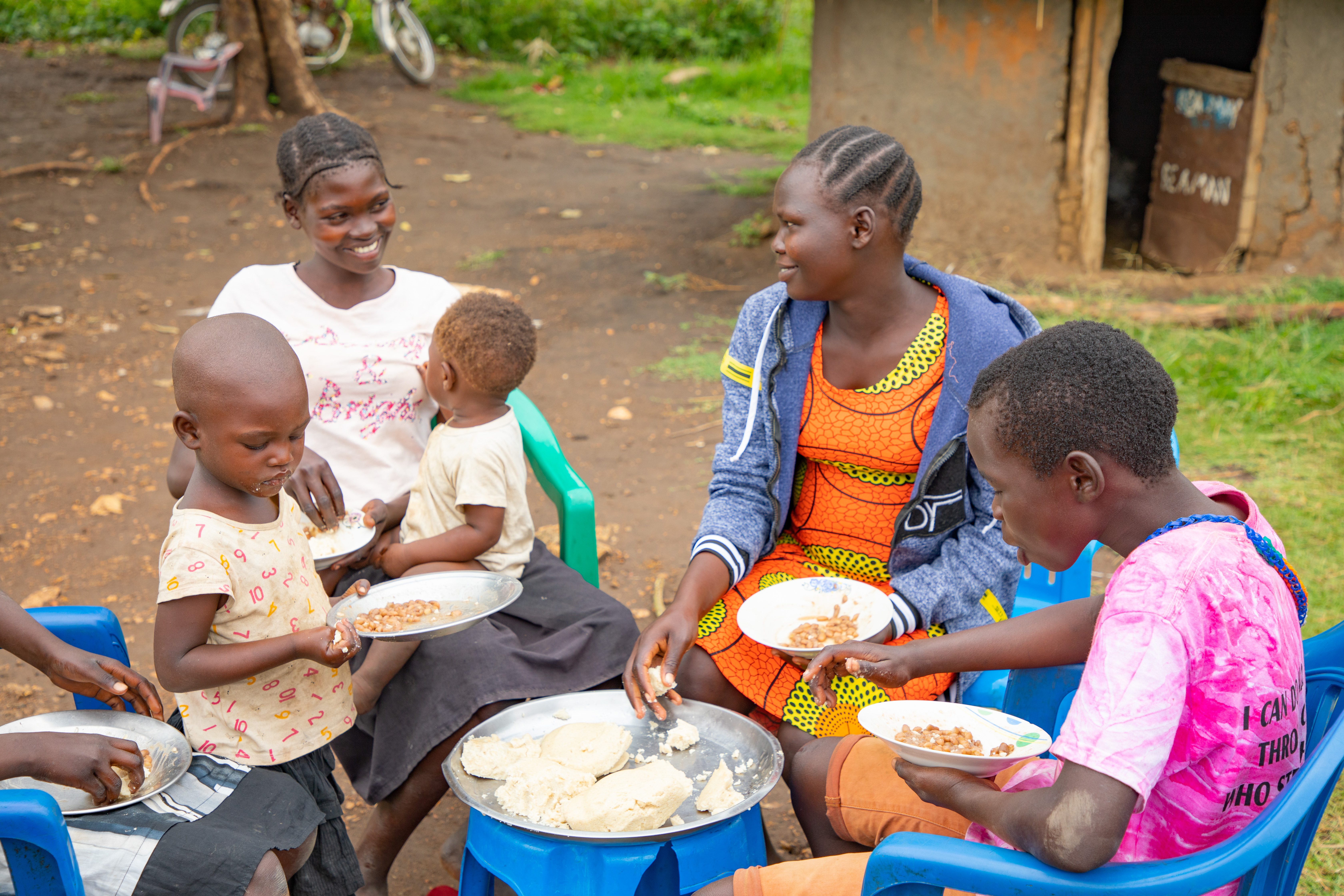 As darkness falls, Viola is ready to serve the third meal of the day. The family prepares to sit in a circle, and with the aid of Angelo’s phone torch, everyone is able to find their plate. Before they eat, a prayer is said, often led by Brian, in perfect English. Today, Viola has cooked the children’s favourite; maize meal, a nutritious bean sauce, and cabbage.

After eating, Angelo announces the next big activity for the evening, Bible study, which is often preceded with praise and worship. As the announcement comes, the happy and satisfied children shout “Yay!”. Tonight, the family will read from Matthew 5:3-9 and Matthew 12:33-34, for tonight is a night to celebrate blessings.