She knocked on the neighbour’s door. There was no other option. The rain was becoming heavier and she knew their little house wouldn’t keep them from death. If she could get a small place for the children to sleep at night, that would be enough. It’s only till the rain passes. After that she would somehow patch up the place to live.

Jalima was still halfway through the conversation with her neighbour when she heard a loud noise and she knew it was the house.

“I also remembered that Preethika had gone to use the toilet and I ran,” says Jalima, “The house was flat and I screamed for help thinking my little daughter was in there.”

“I came from the toilet and hung on a plank jutting out of the roof to swing,” is how Preethika describes the incident “The house tumbled down just after I left.”

Jalima has been living in this house for three years with her daughters Anushika, 12 and Preethika, 7.

“Our house was made of clay and it was just one room,” Preethika says, “mother hug a cloth to separate the cooking area and we slept on the other side.

“Once when akka (older sister) and I were sleeping while amma had gone to the shop, the wall fell down and amma covered it with urea bags. When it rained, we couldn’t sleep because the water leaked in, so we stayed up.”

Their toilet too was makeshift, covered with urea bags and cloth. 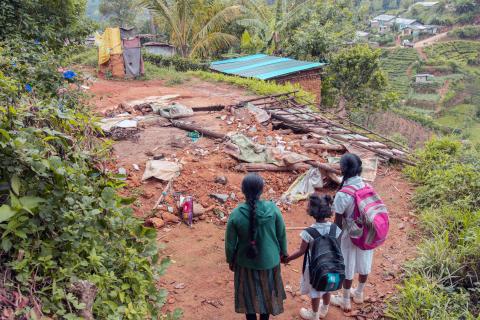 When the rainy season began, Jalima knew she had to move her girls somewhere else. They had escaped death several times already and Jalima knew her temporary patch up to the walls will not last.

“The house had all four walls at the beginning but slow they came apart,” Jalima says, “before it collapsed the house had only one wall and the other sides I had covered with urea bags and plastic sheets.”

“We only had a few utensils, a rack and a mattress inside the house,” she says, “The children sat on the ground to study,”

Jalima’s husband left her when Preethika was two years old. Jamila works as a tea plucker in the estate has been struggling to support the basic needs of her family. But she makes sure the girls don’t miss school.

“Somedays I don’t even have food to give them to eat. Those times the teacher’s in Preethika’s school would bring them something to eat,” she says.

“Because we don’t have electricity, we use the kerosene lamp, but am scared to keep it on for too long because the little one might topple it. So I buy candles most of the time, “she says.

Anushika goes for classes after school and Preetika would come home by 12 noon from school and stays alone till her mother returns home in the evening.

The neighbour doesn’t have much space in her house, but she was kind enough to offer a space in her kitchen for the little family to sleep. Preethika and Anushika goes to school from there these days.

Preethika says she wants a cement house next time because they are strong and they have “TV and cushions (sofa)”. She believes those accessories come with a cement house.
“Two rooms are enough,” she says, “one room for me, amma and akka to sleep and the other room for the kitchen, the TV and the red cushions.”

We are building a house for Jamila and her daughters and would love for you to be a part of it.