It has been two months since the health authorities in Uganda declared an Ebola virus disease (EVD) outbreak caused by the Sudan Ebola virus after confirming a case in Mubende district on 20 September 2022.

At least nine districts, including Kampala, a city of 3.6 million people, have reported cases – with Masaka and Jinja, other business hubs, as the newest additions.

For the first time, however, the number of EVD cases has not changed for a week and counting, with 141 cumulative confirmed cases and 55 confirmed deaths, including 21 children and 7 health workers, as of 20 November 2022.

The total number of recoveries has increased by 10 from 69, while active contacts still under follow-up have further reduced to 703 from more than 1,000 a week ago.

In addition, the two districts of Kagadi and Bunyangabu have been dropped off the follow-up list after completing two incubation cycles without a new case. 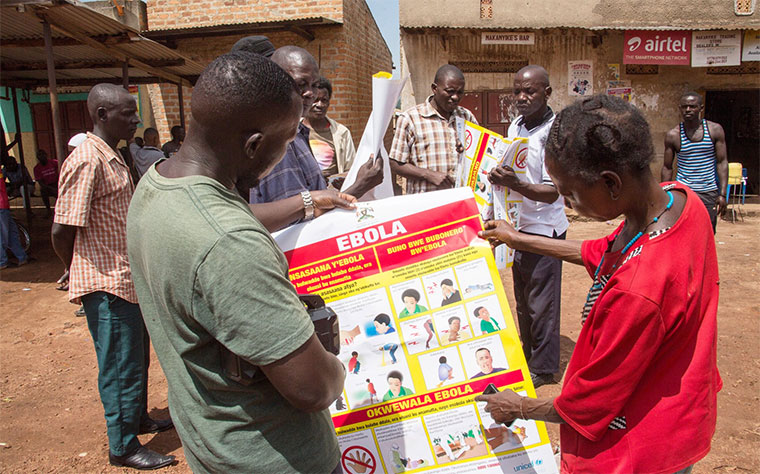 There are still plenty of challenges

Uganda has coped with multiple Ebola outbreaks, the last reported in 2012. However, the lack of a proven vaccine against the Sudan strain remains a public health concern.

Health experts predict that Uganda could record 1,200 cases and 500 deaths by late April 2023 if the national response fails, surpassing an outbreak in 2000 when 435 infections and 224 fatalities were registered. The working assumptions suggest that most fatalities will be children and adults above 50 years.

It is against this expert warning that World Vision has trained, equipped, and deployed influencers to mobilise and educate communities on Ebola prevention and control as part of its response to the deadly disease.

"Responding to Ebola is cheaper and easier if we can quickly invest in community efforts to stop the spread of this disease in the most vulnerable communities with weak health systems. This way, we can safeguard our children. Every minute counts," said World Vision's Ebola Response Manager in Uganda, Benon Musasizi.

We cannot wait for the disease to devastate communities before we can alert them about the danger and what they can do to avoid it. This team of faith leaders is now certified to apply World Vision's Channels of Hope for Ebola for community engagement and risk communication to save lives and secure children's futures. – Musasizi

"This complex message needs to be delivered right by the messengers. Faith leaders are influencers in the communities. They speak the same language and understand the context, which is why we choose to work with them," he added.

World Vision is working closely with the national and district Ebola taskforces, partners and communities, leveraging unique strengths in community engagement to create the awareness needed to contain the epidemic through prevention messaging. To stop the spread, the organisation also intends to divert most of its energy away from the routine work carried out in affected communities and focus on working with influencers, including community healthcare workers, on preventing transmission.

"The impact of Ebola can be utterly devastating for children and families still recovering from the aftershocks of the deadly COVID-19 pandemic. World Vision worked with the United Nations, World Health Organisation and other agencies to help defeat the latest outbreaks of Ebola virus disease in Sierra Leone and the Democratic Republic of Congo. I urge us to work together to halt the spread of Ebola through promoting recommended practices such as safe burials, community education programmes and care for the children orphaned by the virus," said World Vision's National Director in Uganda, Jason Evans.

With children and their well-being as a priority, World Vision is focussing on four national response pillars: risk communication, community engagement, strengthening national and district coordination, and supporting infection prevention and control – through promoting appropriate hygiene practices such as handwashing with soap.

World Vision targets reaching half a million children and their families in Mubende and five other neighbouring high-risk districts of Kiboga, Kyankwanzi, Kagadi, Bundibugyo, and Kamwenge, with a possibility of expanding the response to 10 more districts in the Greater Masaka region.

About Channels of Hope for Ebola

Channels of Hope is a World Vision model that involves building the capacity of faith leaders and faith communities to engage with crucial child well-being issues. Channels of Hope for Ebola draws on religious texts, scientific information and messages, case studies, personal experience and interactive activities to remove religious and social barriers resulting in Ebola's continued spread. It also addresses the stigma and the psychosocial and spiritual challenges affected individuals face. The programme fully equips faith leaders to promote accurate and responsible messages about Ebola and helps them to respond with compassion and care for affected people.

World Vision is one of Uganda's largest child-focused humanitarian organisations. With over seven decades of experience at the grassroots, we employ proven, effective development, public engagement and relief practices that empower vulnerable children and communities living in poverty and injustice to become self-sufficient and bring lasting change. We serve all children regardless of religion, race, ethnicity or gender as a demonstration of Christ's unconditional love for all people. World Vision Uganda works in 63 districts (as of 16 November 2022), impacting around 2 million children and their families to address issues affecting children, in partnership with governments, civil societies, donors and corporates. For more information, go to: https://www.wvi.org/uganda