Ashraf, 7, can hardly talk. It takes him about 15 seconds to utter one word. Most of the time, he nods his head in agreement or shakes his head in disagreement as a way of communicating.

Besides his inability to speak, Ashraf cannot walk or pass stool normally. He was born with cleft fragile legs and imperforate anus, a birth effect that has left him with a bulged stomach and constipated.

About 1 out of every 5,000 babies are born with the imperforate anus or other malformation of the anus or rectum. And cleft foot or clubfoot is very rare congenital (meaning the baby is born with it) anomaly, which occurs in approximately 1 in 1,000 newborns – affecting boys about twice as often as girls – and includes several kinds of ankle and foot deformities.

The exact cause of clubfoot isn't clear, but it's probably a combination of heredity and environmental factors that affect foetal growth.

Despite all these challenges, Ashraf is an active boy. He can crawl from one place to another, and even get into a wheelchair by himself and move around with ease. He is playful and his disability won’t hold him back from having fun with his friends.

Ashraf’s mother, Madinah Nantayi, says her son was diagnosed with a physical disability and a blocked anus immediately after he was born. His legs were of an unusual shape and weakness. They could not extend straight and were rather stiff.

After two days, they visited a health centre in Masaka, where his anus was operated on, leading to a slight improvement. He would now pass stool but with a lot of pain until today.

Unlike the anus, his legs, doctors said, more time was needed before an operation could be done. After two weeks, an operation was done with slight success.

But giving up was not an option for his parents.

They did everything for him within their limits. They continued to visit a number of other health centre both in Masaka and Rakai districts, hoping to get a solution, to no avail. Everywhere they visited and everyone they consulted did not bear any good news. The results remained the same.

With a lot of money and time already spent, it increasingly became clear they were not going to change much about their son’s situation.

Ashraf’s parents are peasant farmers from Kanamunzinzi village in Rakai district. Sometimes they work in people’s gardens for money and occasionally receive gifts from well-wishers and organisations like World Vision. This whole family of eight shares one small house which they use mostly for sleeping. Ashraf is the fourth born out of six siblings.

Because of their dire situation, Ashraf has never received any specialised treatment and has never been to school. His siblings go to a nearby government-aided school, but because Ashraf needs special care, his mother Madinah says they do not have the means to take him to either specialised hospital or the school. They were advised to go to Mulago hospital, Uganda’s national referral hospital, but they do not even have money for transport, leave alone money needed for medical bills and their upkeep while admitted. “Even going to hospital requires money which we don’t have or envisage to get in a near future,” says Kyampaka Senior, Ashraf’s father.

With a wheelchair specially prepared by the experts according to his measurements, courtesy of World Vision with support from Wheelchairs for Kids, Ashraf is upbeat about going to school. 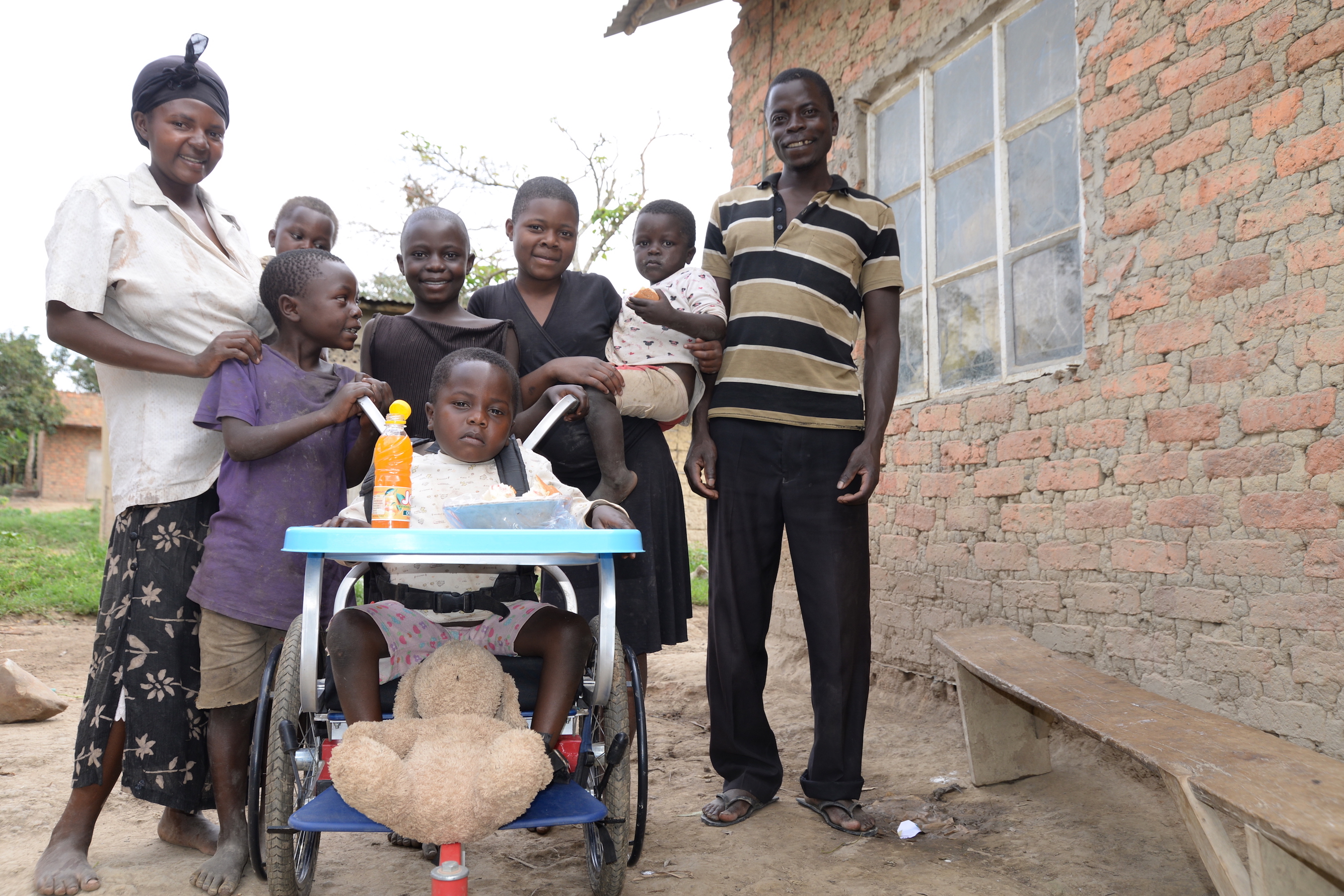 In our short conversations, he says he would very much love to wake up and go to school with his siblings. He says he would like to study and to become someone of importance and influence in the world.

His parents are thankful to World Vision for improvising their son with “special legs”. When we received this wheelchair everything changed for the better. Ashraf feels very comfortable and happy when he sits in it. He knows that it was made only for him.

Wheelchairs for Kids is an ongoing valued partner of World Vision who regularly provides wheelchairs that are sent to Uganda. Since 2015, a total of 1096 children have benefited from this support.

The wheelchairs provide hope and a fresh start for children just like Ashraf.

They are fit for purpose and designed to suit the tough African terrain, including urban and rural communities. All the way from Australia, World Vision ships bright and colourful wheelchairs to children who need them most. A third vital member of this partnership, Motivation Charitable Trust, trains local health centre staff to fit wheelchairs and ensure children are safe and happy.

Ashraf’s parents confess that without a wheelchair going to school would prove an insurmountable challenge both for them and their son. As parents, it would mean carrying him on the back to and from school every day. That would be hectic because we have to spend the day working in the garden and looking for money to feed them.

For now, Ashraf is more than eager to start school. But he still needs medical care if he is to realise his dream of one day going to school and getting educated to reach his full potential and become what God created him to be. His parent’s wish list is short: construction of a water point nearby, and meeting medical bills for specialised treatment.

They don’t know what Ashraf’s future is going to be. But they’re so much more optimistic. When they think back to that first day they received Ashraf, they are amazed at how things have changed. We know he is going to be fine.