The ravages of war, the pain of facing life without a parent and all the vulnerabilities a young girl is exposed to in a refugee settlement, were not enough to shatter the dreams of 18-year-old Lina. Lina came to Uganda as a refugee in 2016, fleeing war at home in South Sudan.

Her description of the fatal night her father died as they fled breaks one’s heart: “We were in Juba in 2016 when war broke out. I was staying with my father; my other brother had travelled abroad. Our mother had succumbed to cancer three years earlier, in 2013. My father [was] all I had.” She fights hard to hold back tears. “He was shot dead before we entered Uganda. He was my only source of hope … I can’t explain how I felt after his death.” She cannot hold back the tears anymore, they stream down her cheeks.

When Lina arrived in Bidibidi, she was handed over to a foster parent who took care of her as she tried to look for any of her relatives in the settlement. Her education was disrupted. Previously, she had attended school in Uganda and was in her Senior One second term holiday when the war started. Not having a father to support her with school fees meant no more school for her, at least not in a good private school in Uganda like it was before.

Instead, Lina had to start secondary school all over again and the condition of the school she joined in the settlement pushed her to say goodbye to her childhood dream of being a doctor.

“I had always wanted to be a doctor and save lives. This would have happened had I stayed at my former school and had life not turned this challenging. At my new school, everything was less encouraging, the teachers were not enough, the books were not there, [there were] no laboratories and there was no way I was going to hold onto my dream,” she explains.

Lina then decided to take a shortcut, the arts!

“I had noticed that I had some talent in my primary [years] but I didn’t give it much thought to it because I wanted my focus to be the sciences. But, when all this happened, I revisited my talent in secondary school. I started drawing and painting and I actually realised that I was good at it,” she said.

In 2017, Lina met Canadian artist Sandra Chevrier and several other street artists from Europe and the US during an arts workshop that World Vision organised in Bidibidi settlement in partnership with Apartial, an online community of artists. The project saw refugee children team up with global contemporary artists who helped them to draw their own empowering art pieces. Lina painted her renowned ‘Superwoman’ piece which impressed everyone at the workshop and beyond.

“The piece I drew at Swinga Child Friendly Space is about being a super woman. The idea behind it is to encourage my fellow girls that they can make it in life and become super women in future. All the powerful women in the world have gone through a difficult moment in their lives but that never hindered them from chasing their dreams,” Lina says.

Since the workshop, Lina’s image has had quite the impact and she has been called on several occasions to talk about it whenever there are visitors at the site. The image caught the eye of the then World Vision International president, Kevin Jenkins in 2017 when he visited the settlement.

“I met Lina in front of her painting and heard her harrowing story of leaving South Sudan first-hand. She told me how hard it has been for her to make friends - but also how much healing she has experienced in being able to paint this dramatic image,” Kevin said. 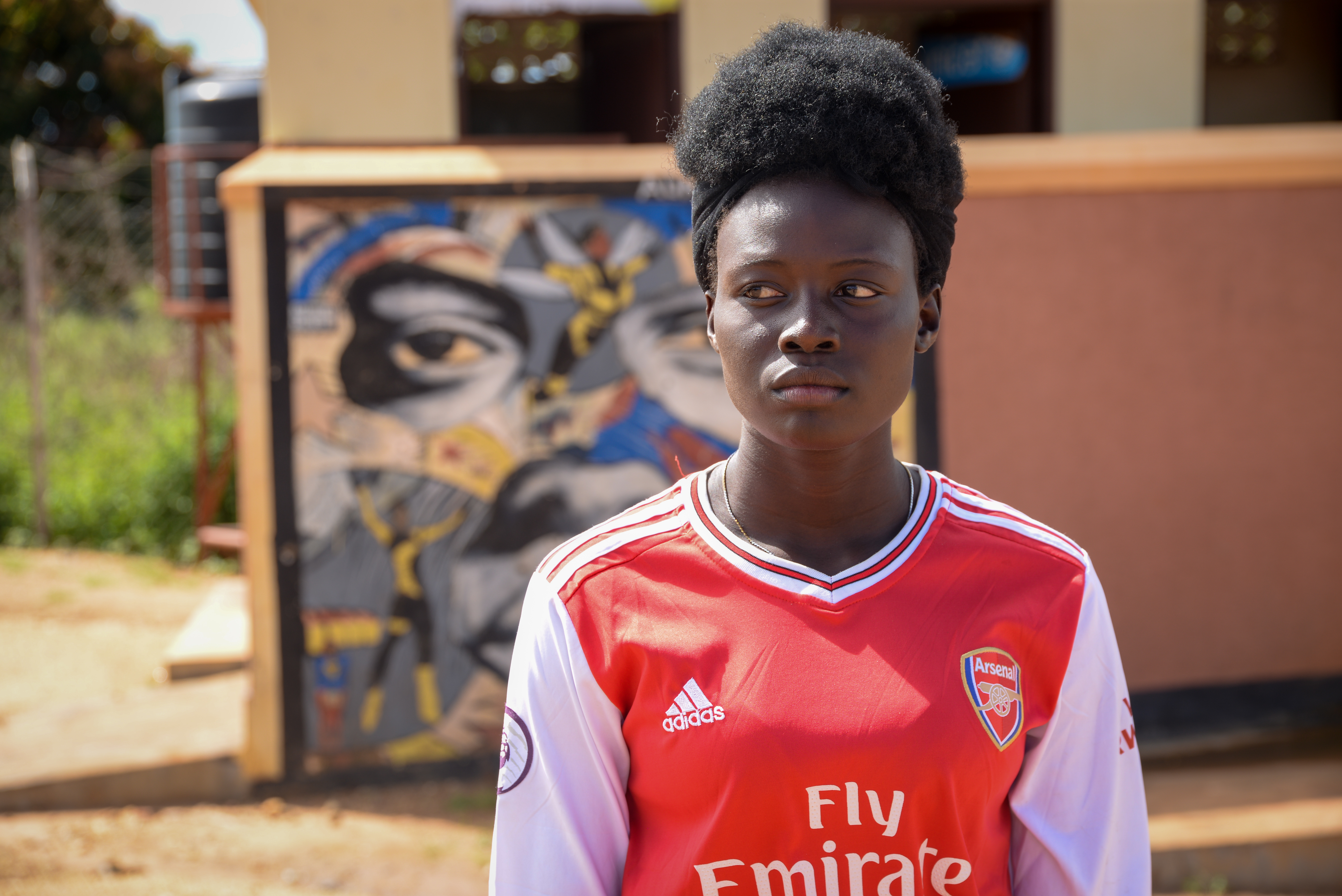 Lina just completed her Senior Four and hopes to spend most of her vacation time painting. She is happy she now has some time to concentrate on art and also teach her fellow young refugees how to paint.

“I couldn’t teach them before because I was busy with my school,” said Lina.

“Painting has helped me and I believe it could help my fellow refugee children. When you are painting, you feel a freedom of the mind and all the terrible memories just disappear,” she said.

Lina’s art depicts a hope and a future of possibilities, which has helped her to focus on the good that is ahead and not her ugly past,

“I only paint positive things - hope, courage, the future and strengths. That is why among all my pictures there isn’t a single sad one. I just don’t want to relive those terrible moments,” she explained.

She would like to continue to Senior Five but she is worried that this might be a challenge because Advanced Level (Senior 5 and 6) is more demanding and her school doesn’t have a Fine Arts teacher for Advanced Level. This has Lina worried. Her education is the one area where she would like help in order to realise her art dreams.

“I would like to set up an art studio in the future, big enough to employ as many people as possible. I could have the talent to do this, but I also need the papers (degree). This is why it is important that I first study. My only worry now is how do I proceed if we don’t even have an art teacher at school. I just need someone to support my education,” Lina said, her gaze fixed onto the distant horizon.