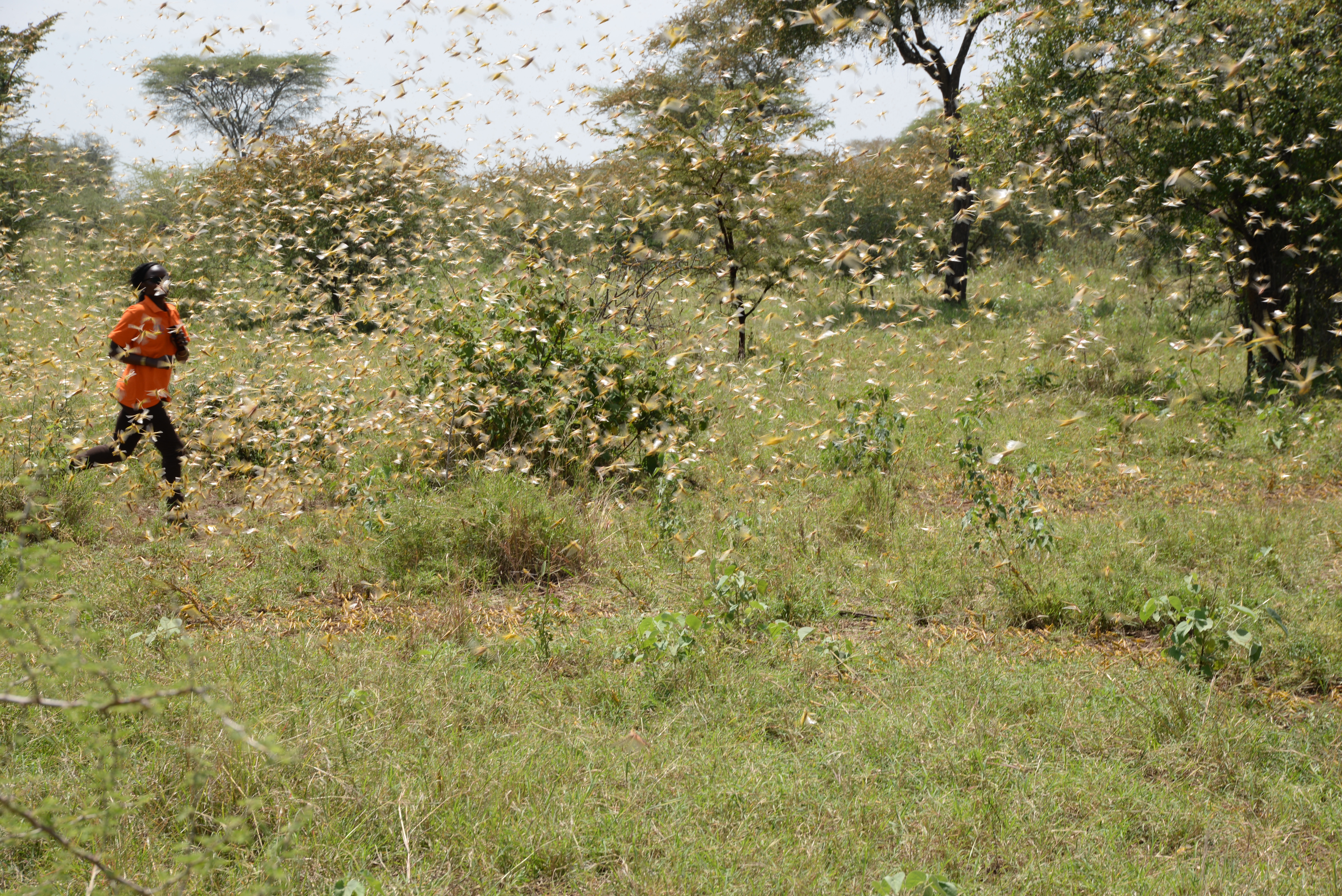 It has been over a week now since locusts crossed into Uganda from Kenya. The migrating pests came into the country through the Amudat district in the North-Eastern part of the country. They have since spread to at least 10 more districts; Moroto, Nakapiriprit, Abim, Katakwi, Agagao, Kitgum and Kaboong among others.

Cattle keepers in this area now fear that their animals will lack food after the locusts devastate the vegetation.

“Our region is well known for cattle keeping. We need the shrubs and the grass to stay, our animals depend on them. If these locusts eat up all the pasture, then the animals will be hungry for months,” says Michael Yeko, a 28-year-old cattle keeper in Komoret village in northeastern Uganda.

Michael, a father of three who lives with his family and his uncle, owns a herd of 50 cows and about 15 goats.  His family's livelihood depends on their livestock. He says he used to hear about locusts from older people and in the bible. But, until recently, he could only imagine how destructive could be.

“We have always heard about these locusts but we had never seen them,” he said. “They are must be dangerous creatures! It is from these animals (the cows) that we get food for our children, but also school fees to take them to school. If they perish in hunger, we will also be as good as gone”

To confirm Michael’s fears, experts in the most affected districts of Moroto, Amudat and Nakapiripirit have warned that since there are no crops for the insects to feed on, they will embark on the natural vegetation, which is a major source of pasture for livestock. The veterinary officers from the three districts indicated that more than 3.6 million animals could be affected, including cattle, sheep, goats, camels and donkeys.

Natural vegetation provides 95 per cent of the pasture and food for the animals. Locusts are known to ravage any green vegetation they come across, consuming everything in their path. If they keep coming in such large numbers with no sufficient control on the ground yet, there won’t be much left for the animals.

According to the Food and Agriculture Organization, it takes only 5,000 locusts to consume enough food to feed a cow. A typical swarm is about one square kilometer (1Km2) and consists of about 150 million locusts. Together, these pests consume enough food enough to feed 30,000 cows in a day!

“Karamoja is predominantly a cattle keeping region with some big numbers of goats and sheep as well. About 90 per cent of our people depend on livestock for their livelihood so if there is no pasture for the animals it will impact negatively on the population,” said Dr. Moses Okino, the District Veterinary officer, Moroto

In the past week alone, at least five swarms of mainly yellow locusts have crossed into Uganda. According to government entomologists, these are the mature type that do not cause as much destruction on the vegetation. Instead, they instead lay eggs and keep moving. But, if there is not enough control right now, the eggs will hatch and young hungry hoppers will devour the vegetation in the coming months.

World Vision in Uganda is on the ground to asses the long-term impact of this invasion on the communities and children. The concerns so far include a likelihood of the locusts staying being present until the planting season, which is only one month away. We are assessing how this will affect food security in the region. The locusts are also expected to ravage the the same vegetation that provides pasture to livestock in this region. Over 90% of the Karamajongs depend on livestock and according to the officials in the affected districts, over 3.6 Million animals might be affected.

“The larger impact of the locust infestation will not be felt today, but in the coming weeks and months, when the loss of pasture and limited access to food commodities will be felt by affected populations, including millions of children. It’s not only about the immediate threat of the current swarms of locusts, but also the food insecurity implications and what that means in terms of population movements,” said Joseph Kamara, World Vision’s Regional Humanitarian Emergency Affairs Director for East Africa 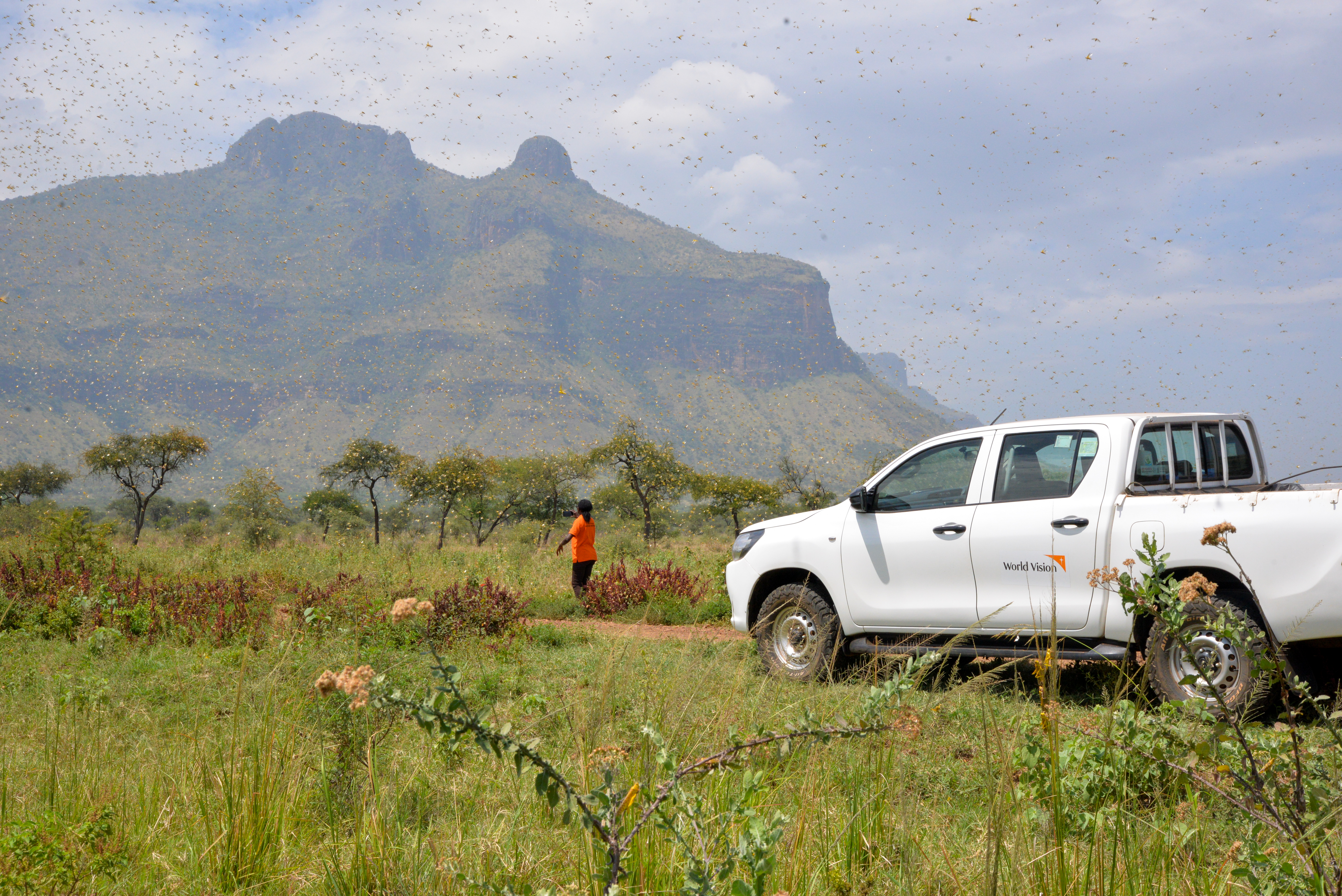