When Ronnie’s mother, Prisca, was told that her 2-year-old son had cerebral palsy, things suddenly made sense as they had been worried about Ronnie for some time.

Ronnie was born healthy until he suddenly became ill with fever and seizures followed by chronic motor impairments. He was three months old when he suffered severe malaria, which was suspected to be the cause of his condition.

By the seventh month, his mother Prisca noticed that all was not well. She had been telling friends that her son wasn’t sitting up or crawling like she thought he should be. She had had experience with children as a baby sitter for 10 years before she had Ronnie, so she knew what other children his age were like.

It was about this time that she contacted her doctor concerned. “He (the doctor) told me that it wasn’t anything to worry about and that he might just be a bit of a lazy boy,” she recalled.

Apparently lots of boys that age can be a bit slower to develop. Her doctor told her to give him a month or so and then go back if she was still concerned. After the month, there were lots more doctors’ appointments and health visits. People just kept telling her that he was a lazy boy and that she should stop worrying. But she was not convinced. Her long experience with children was spelling otherwise.

It wasn’t until he was two that a pediatrician at a local Health Centre actually told them that Ronnie had cerebral palsy. “It wasn’t as much of a shock as it could have been, to be honest,” said Prisca. “I have got a friend whose daughter, who must be in her twenties now, has got cerebral palsy too. I had been talking to her several times about Ronnie and she said it sounded a lot like what she had experienced when her daughter was growing up.”

Cerebral Palsy (also called CP) is a group of conditions that affects the parts of the brain that control the muscles. This can cause problems with movement, posture (standing up straight) and balance.

Some but not all children with CP also may have other conditions, like intellectual and developmental disabilities. These are problems with how the brain works that can cause a person to have trouble or delays in physical development, learning, communicating, taking care of himself or getting along with others.

Cerebral Palsy is the most common cause of movement problems in childhood. The difficulties it causes change continuously in the growing child. About 1 in 300 children (less than 1 percent) has CP. Most children are diagnosed by the time they are 2 years old.

The Roots of Cerebral Palsy

The condition is likely caused by Cerebral Malaria, according to researchers from Karolinska Institutet in Sweden and Makerere University in Uganda. It is more frequent and has higher death rates in Uganda than in high-income countries.

And finally, when the doctor gave them the diagnosis, Prisca said, they were not shocked “We’d already had some time to think about it and let it sink in, so I suppose we weren’t too surprised in the end,” she said.

Searching for a Solution

Although they weren’t surprised, they didn’t actually know that much about Cerebral Palsy. And once they got the diagnosis they turned to traditional herbalists for a solution in vain. Ronnie’s father is a traditional herbalist himself. He did everything possible without much success.

As a lot of people probably find, there’s just so much out there and a lot of it is rubbish and confusing. Ronnie’s condition had been mismanaged and it was too late for medical intervention. He now needed a wheelchair for mobility, as he was not going to stand or walk.

Luckily for Ronnie’s parents, their councilor for disability suggested to them to get in touch with World Vision, as they could provide them with a wheelchair to ease Ronnie’s movement struggles. 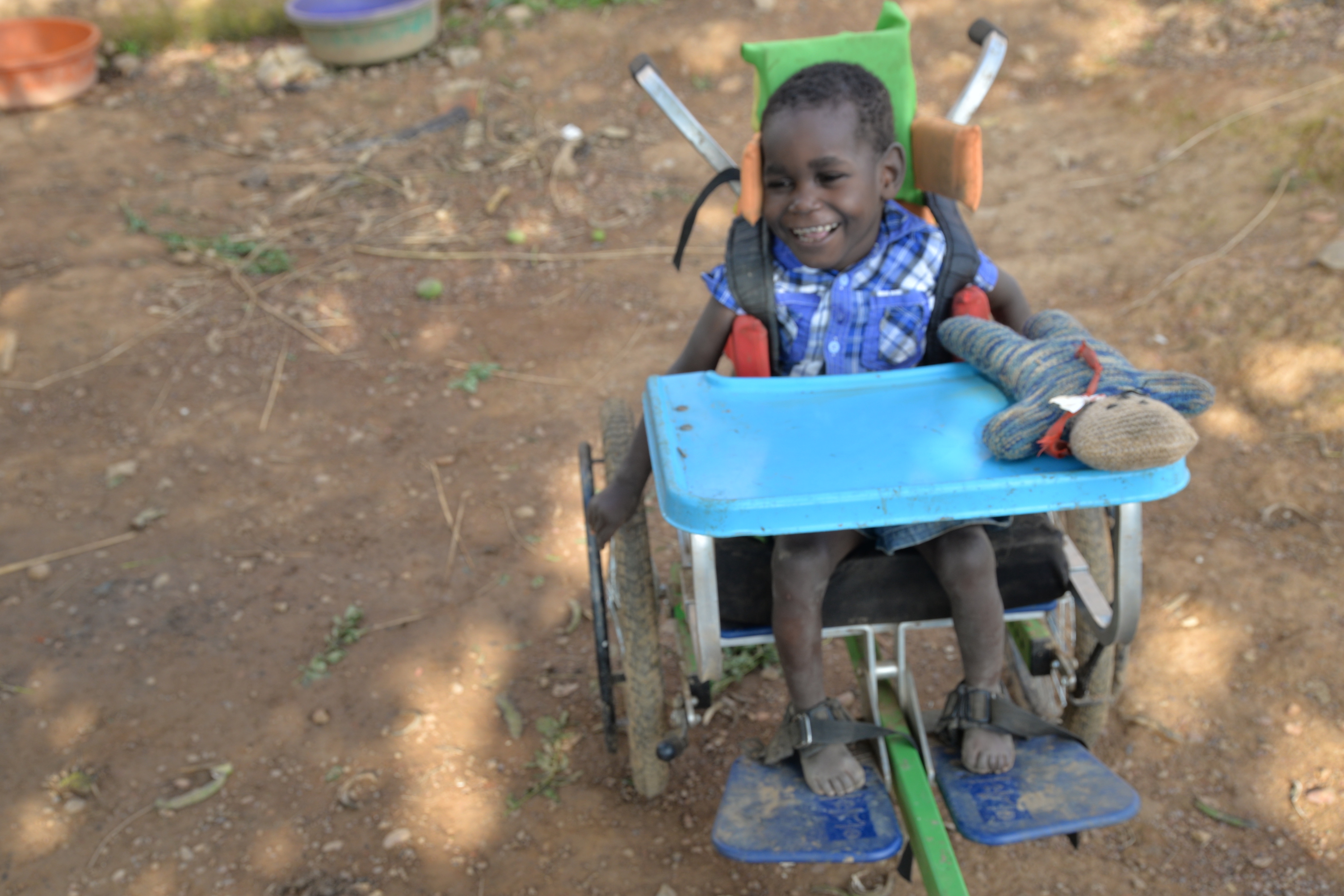 They registered for a wheelchair and the first time they had a team visit them to take their son’s measurement it made such a difference. Ronnie has a quite severe case of Cerebral Palsy but now he gets out and about a lot, courtesy of a wheelchair. “Without it, I honestly don’t know what we would have done,” said Prisca. “World Vision staff know exactly where we’re coming from because I believe in the daily work they do, they meet many children even in the worst state.”

I honestly don’t know what we would have done [without the wheelchair] — said Prisca.

Since 2015, a total of 1,096 children like Ronnie have received the support of a wheelchair from World Vision. The wheelchairs provide hope and a fresh start for them. They are fit for purpose and designed to suit the tough African terrain, including urban and rural communities. All the way from Australia, World Vision ships bright and colourful wheelchairs to children who need them most. A third vital member of this partnership, Motivation Charitable Trust, trains local health centre staff to fit wheelchairs and ensure children are safe and happy.

Ronnie’s parents have now come to terms with the fact that Ronnie has Cerebral Palsy and it’s going to affect him for the rest of his life. But, it doesn’t make him a different child. He’s just Ronnie, at the end of the day. That’s just the way he is, that’s just him, that’s part of who he is. He is so much more than a young man in a wheelchair.

Prisca smiled as she said, “Since we got a wheelchair for Ronnie it has been brilliant. It has greatly eased his movement as he can go where he wants. Sometimes, when Ronnie is ill or tired of lying in the bed, we put him in the wheelchair and move him around. We were very unsure about getting a wheelchair for him, but our councillor for disability worked with World Vision and they got it for us – and it has been amazing. It has really improved our quality of life.”