Political and economic instability has gripped the South American nation of Venezuela for nearly a decade.

A shortage of affordable food and vital medicine has pushed more than 5.5 million Venezuelans to flee their country to neighbouring Brazil, Colombia, Ecuador, Bolivia, and Peru.

This ongoing mass exodus is one of the largest displacement crises in recent history, according to the UN.

Thousands of children, adults, and elderly people - many suffering from malnutrition - are escaping Venezuela on foot with what few belongings they can carry.

Starting over in a new country is never easy and much harder still when you and your family are just some of the millions entering Colombia and other neighbouring countries in desperate need of shelter, healthcare, food, education and reliable work.

Such an influx of people places even more pressure on highly populated rural and border towns in Colombia and Brazil, where Venezuelans first arrive in search of a better life. Where work is already scarce for locals, Venezuelan refugees are not always welcomed with open arms. Some, like eight-year-old Reishell in Ecuador, experience discrimination and bullying.

“There was one kid who bullied her a bit at school,” Reishell’s mother, Amalia, recalls of their arrival in Quito, Ecuador’s capital city. “I remember that she told Reishell that her food was gross. And my daughter took it personally and fought with the girl. I had sent her with an arepa, our traditional food from Venezuela. And the girl made fun of it and so Reishell felt very attacked.”

“It wasn’t that easy making friends,” Reishell recalls. Of her early days at school in Quito, she says: “some [kids] were bad and hit me and some really good ones shared with me and we played really fun games.”

Reishell’s family left their home in San Juan de Los Morros, central Venezuela, two years ago when there was no longer medicine available to treat her sick brother, Aiden, who was just a one year old at the time.

“He was on the brink of death,” Amalia says of her son’s poor health. “Because of the lack of basic services, gas, food, medicine, our children were malnourished and it was either [we leave] or we stay to watch them die.”

“We were just surviving,” she laments. “A month's salary was enough for a flat of [30] eggs and a sack of bread flour, which was not nearly enough to sustain all four of us.” The economic crisis and hyper-inflation made medicine, food and other necessities scarce or unaffordable so the family was forced to flee to Ecuador.

“When we got here, after a few months, Reishell started to have a negative attitude… it was like she was absorbing everything that happened,” her mother explains.

“Even though she didn’t show it directly, she was absorbing the things that happened on our journey and missing family we left behind. She started getting aggressive at home and at school. It was like it all exploded and came out,” Amalia says.

They are part of the more than 400,000 Venezuelans who have settled in Ecuador since 2015. The bullying Reishell experienced at school made it harder for her to deal with the trauma of their journey to Ecuador, Amalia says. 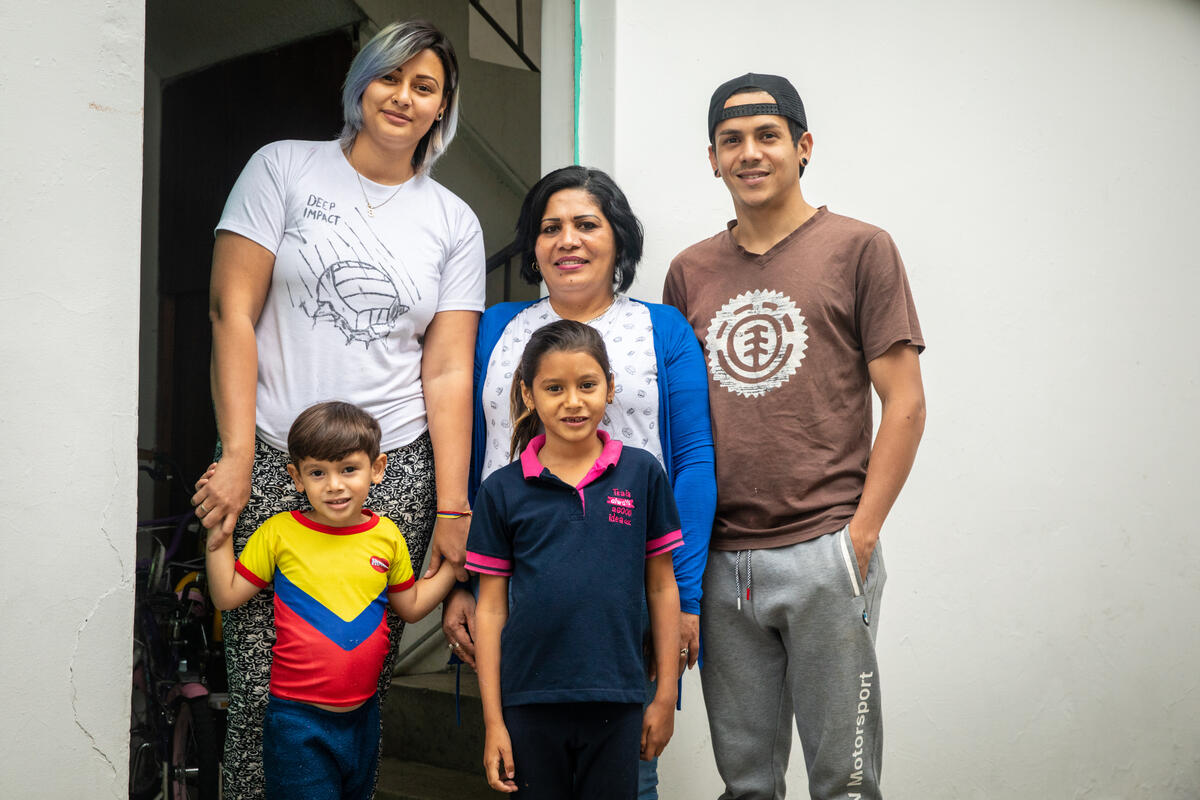 Bullying is a reality many child migrants face as they try to settle into a new school, culture and environment, says Paulina Alcazar from World Vision Ecuador, where she works on a program called Respiramos Inclusión [We Breathe Inclusion] in local schools.

The programme educates teachers and students about the importance of inclusion, how to achieve it, and the lasting effects of xenophobia, especially on young children in their formative years. To date the program has reached more than 80,000 students throughout the country.

“The We Breathe Inclusion program allows us to work on approaches to human rights, gender, interculturality, and also diversity,” explains Paulina. The programme, a collaboration between World Vision, the UN Refugee Agency, and Ecuador’s Ministry of Education, works with children as young as three.

“The first challenge a child migrant [like Reishell] faces is grief – the abrupt change and sense of loss felt when you arrive in a different country and have to adapt to new customs and a new culture,” Paulina explains.

“How children and other young migrants behave often changes,” she has observed. “They may seem annoyed or aggressive as a result of the abuse they may be experiencing.” This appears to be Reishell’s case, Paulina says, and another reason why educating children – not only adults – about diversity and inclusion is so critical.

The We Breathe Inclusion programme has hosted diversity and inclusion workshops at nearly 40 different schools in Ecuador for some 120 teachers and faculty members.

Another 80 schools in Quito and Manta, a coastal city in central Ecuador, are currently receiving support so teachers and students from all backgrounds better understand how to embrace one another’s differences and the benefits diversity brings to a classroom. 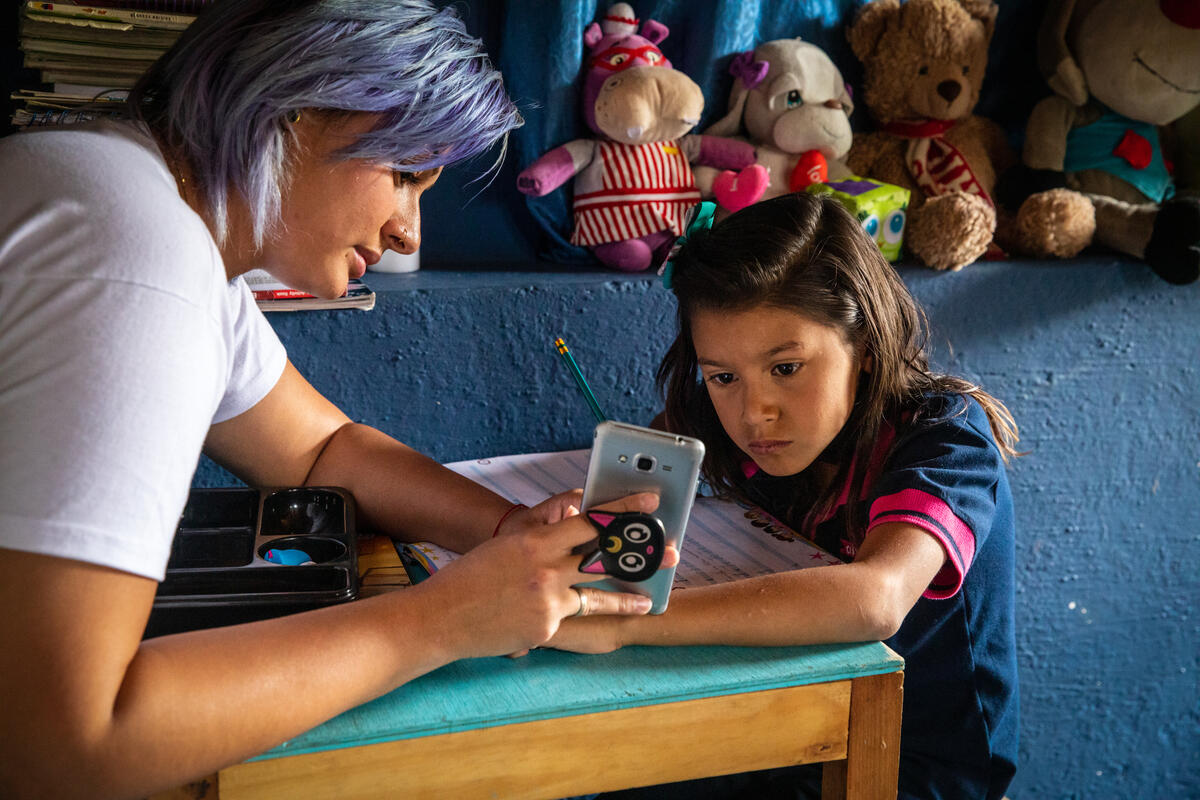 The programme also offers mental health support, such as informal counselling, to teachers to help them manage increasingly changing demographics within classrooms.

World Vision offers mental health support to child migrants more widely in the country and has provided families like Reishell’s with food, school books and supplies, and soap and masks to protect themselves from COVID-19 – another challenge facing children and adults alike in Ecuador.

As for Reishell, she’s much happier these days and has made two new best friends from her grade two class in Quito: Isabelita and Ariangel. “They’re really good friends,” she says.

“She felt alone when we first arrived, but little by little she opened up and made friends,” her mom says of Reishell’s transformation.

Programmes like We Breathe Inclusion can help make a child’s transition to a foreign country easier, particularly as they struggle with trauma experienced on the journey.

This support is increasingly vital as the COVID-19 pandemic and the mass exodus from Venezuela led to border restrictions, forcing migrants to rely on human traffickers and clandestine routes to reach a better life.

“Child migrants often experience depression and anxiety, and they can feel isolated as effects of discrimination,” Paulina explains. “Due to the pandemic, children have also been affected by technological and socio-economic gaps and school dropouts can occur due to lack of computers at home or access to the internet.”

Every bit of support can help children like Reishell adapt to the many challenges ahead – and get back to playing and being a kid.

For more information on how you can help, please click here.