“Those without knowledge about Farming God’s Way thought I was a witch or used juju because they couldn’t believe why my maize stood green and healthy during a drought, while other people’s maize fields had already withered and died,” Acklas says.

Acklas, 42, has lived his whole life as a farmer, toiling hard and cultivating large portions of land to feed his family without much to show for it.

“My sweat had been in vain, it was a life of frustrations and failure. What I had lived to know well in life is poverty. Farming, despite being my main source of living, has never given me joy till now,” he says.

“Before World Vision, particularly THRIVE came to this area, we were sufferers who carried huge burdens on our shoulders without any hope. I never thought we would ever find anyone to help take our burdens away to start a different life,” Acklas says. 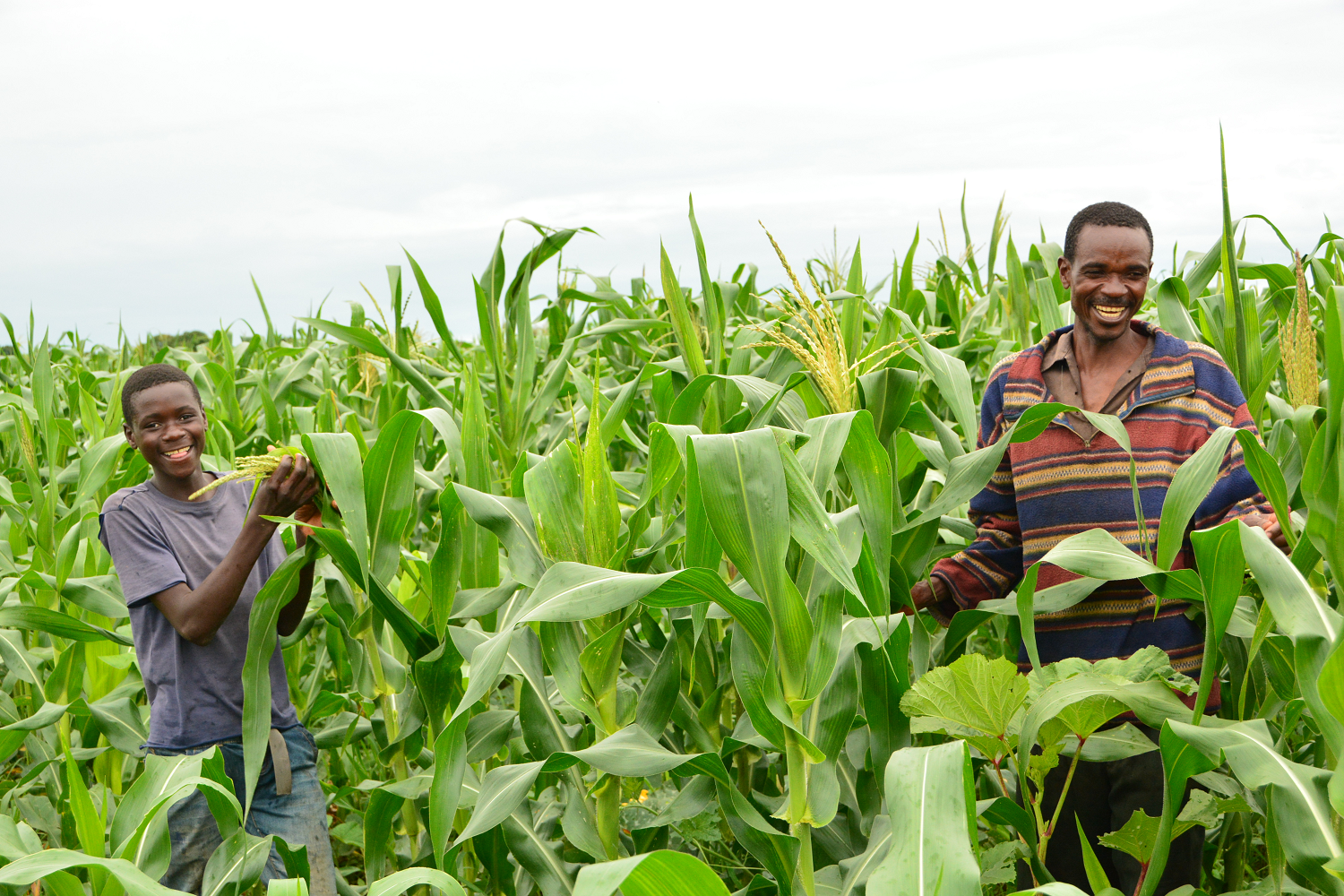 “Farming God’s Way, which came through THRIVE in 2016, is sweeping through our homes like wildfire, ending poverty and hunger because it is bearing big fruits, blessing families and has brought hope to people like me who wondered what the future held for my children,” Acklas says.

Acklas says that because of Farming God’s Way, (FGW) he has been able to get high yields and returns by cultivating a smaller portion of land. “From a smaller piece of a field, I have been able to harvest enough to feed my family throughout the year and managed to sell the remaining produce to support my children’s education,” Acklas says.

He adds, “I have proved that Farming God’s Way is easy, fast, requires less labour, gives high yields and retains soil fertility and water, giving me a sense of joy to see farming as a business and not a struggle or source of pain.”

Acklas, who lives in Chimbuwa village, about 530 Km from Lusaka, Zambia’s capital feels sad that he wasted years of toiling hard and cultivating large portions of land harvesting very little to feed and support his family.

Trained in Farming God’s Way, Farmer Managed Natural Regeneration (FMNR), Savings for Transformations and Entrepreneurship and serving as a volunteer childminder, Acklas says that although he has been involved with World Vision since the organsation began working in Katete district in 2009, he never thought they would be able to help him stand straight on both his feet.

“Farming God’s Way has lifted me and saved my family from hunger. Last farming season [of 2017/2018], we experienced drought that destroyed farmers’ crops completely, except for a few of us who had done conservation farming, which we learnt through Farming God’s Way,” Acklas recounts.

He adds, “I harvested enough maize that I was able to sell some of it to families that harvested nothing and I used the money to buy uniforms and pay school fees for my children.

What we are eating now [in 2019] is what had remained after selling some of the maize. I am so grateful to World Vision for this; otherwise, my family would have experienced [the same] terrible hunger that some of the families are experiencing now.”

Acklas was able to harvest 12 50 Kgs bags of maize (Corn) from a Lima (.25 hectare) where he planted maize trying out the effectiveness of Farming God’s Way for the first time. He says he did his potholing and ripping, application of Sulphur, early planting of certified seed, mulching and using compost manure and some fertiliser on parts of the demo field.

“This farming season (2018/2019) I decided to cultivate three hectares of land where I have farmed God’s Way, but planted the recycled seed on a Lima and certified seed on 2.5 hectares of the field. I have discovered that the maize in the field with recycled seed is yellowish and is half the height of the other where the certified seed was planted even though everything else was applied equally,” he explains.

Acklas has also seen the importance of diversifying to maximize on the opportunities of production and increased income sources and to minimize on the losses.

“I am glad that my harvest this year will be high. I am expecting to harvest more than 400 50 Kgs bags of maize, which will give me more income in addition to other crops, including soya beans, groundnuts and sun Flower. Because of my savings, I also now have 16 goats and some pigs which are adding value to my life. In the past, I only depended on maize for livelihood,” he says.

Acklas says further, “Had it not been for Farming God’s Way, I would only be expecting not more than 15 50 Kgs bags of maize on the same piece of land where I am expecting more than 400 bags. That’s how bad things used to be in the past.”

For Acklas, the combination of FGW with Saving for Transformation (S4T) is a plus to him and most farmers because of the approaches’ ability to leverage on each other.

“I have been able to buy farm inputs like sulfur and fertilizer to start farming on time because I was able to access loans and my shares from the savings group. Otherwise, it would have been difficult and could have jeopardized my plans,” Acklas says.

According to Acklas, knowledge from FGW has also helped him to protect his land, which had a portion that was not being used because running water from uphill used to wash away the crops.

Today, he has planted crops on the steep portion because he has managed to block and reduce the speed at which the water moves using vetiver grass and an ‘A’ frame water harvesting method which changes running water from ‘running to walking water and from walking water to standing water.

Acklas has shared the knowledge he gained and taught 20 other farmers in his community, including his neighbours these new methods. But he started with his wife and children first.

Acklas Jr., 14, who is a sponsored child, acknowledges his ability to farm God’s Way. In fact,  during the 2018/2019 farming season, he actively participated in potholing, ripping, the application of compost manure and fertiliser, blocking uphill running water and planting among other things.

“It is good that I have learnt the modern way of farming through Farming God’s Way and crop diversification, which I’ll continue to practice as a business whether I get educated or not. I have seen the benefits of farming God’s Way after the drought we experienced in 2017 [2017/18 farming season]. Despite [the lack of rain], dad managed to pay for our school fees because we harvested something,” Acklas, 14, says. 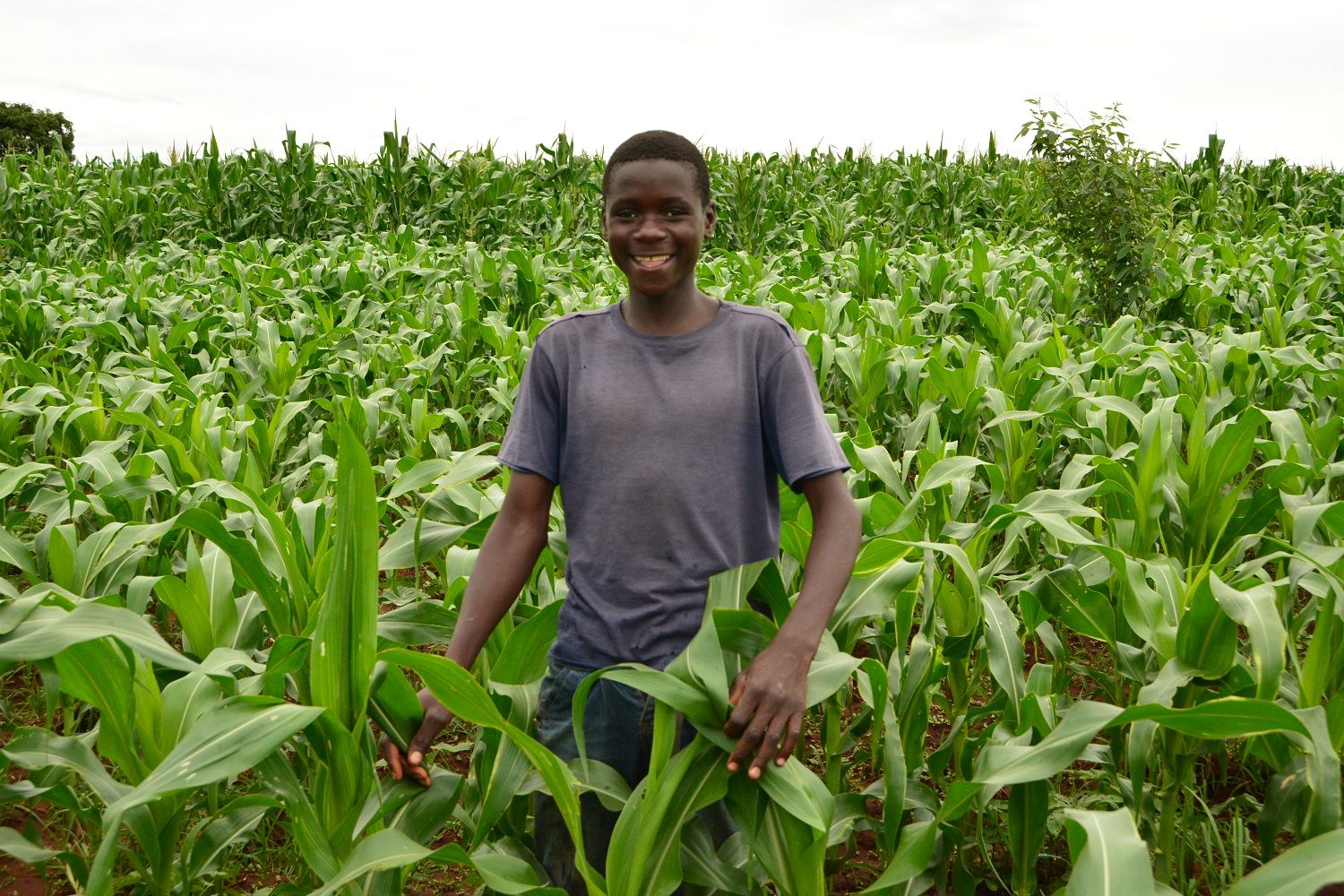 “I want my children, like Acklas Jr., to carry on the vision which we have drawn up together with the rest of the children. In case I die, he knows our strategic plan that encompasses our vision for 2021 and another one than carries on until 2030. We hope to achieve the visions in periods of five years. Our number one goal is to get out of poverty by wiping away hunger in our home and educating all our children without failure,” Acklas says.

One of their dream plans for the period leading to 2021 has already been attained. “We have already managed to buy a big farm in Mambwe district, in Chief Msoro’s area where we intend to build a big farmhouse for ourselves and we intend to move there by 2021,” Acklas points out.

Acklas has taken an active role in the Farmer Managed Natural Regeneration (FMNR) project and is educating fellow members of  his community how to protect the small trees within Vulamukoko community, which generally has bare land because of the number of trees that have been cut over the past years.

Acklas and 2,000 other farmers that THRIVE is supporting in Vulamukoko community have now managed to chase hunger in their homes and hope to soon rise from abject poverty as the project continues to support them till 2021.