The project was initiated in response to the alarming situation of high migration rates contributing to the spread of HIV/AIDS in the Southern Caucasus. The project aims at strengthening HIV/AIDS services, especially to migrant workers. All four countries have experienced problems concerning increasing HIV and migration, for example, Armenia has an estimated 50,000-60,000 seasonal migrants every year and 75 percent of new cases of HIV are reported from seasonal migrants.

The project’s main activities include: establishing a regional working group with the participation of Government, NSA’s and international organizations; facilitate capacity building training’s, review a set of existing HIV/AIDS education materials before distribution and facilitate the development and implementation of regional action plan and the design and implementation of 23 advocacy campaigns.

Lessons Learned: The project addresses the link between HIV and migration involving countries where migrants originate from and the destination countries. This helps to find a joint solution for a regional problem. The project effectively reaches families of migrant workers resulting in an increase in testing levels. One notable contribution of the project is its influence in the inclusion of migrants as vulnerable groups in the Azerbaijan National AIDS strategy. The project produced several documents, such as Policy and Service Gap Analysis, which help address the problems of HIV and migration in the region. Some of the hindering factors addressed by the project include: (1) the high cost of travel to testing centres and stigma associated with HIV in Armenia and elsewhere in the region. (2) Migrants in the Russian Federation often avoided getting tested officially, for fear of losing their legal residential status in the event of the positive test results.

Conclusions: Government and civil society should utilize the regional network created within this project in future programmatic plans, since strong ties have been established and the network can be extremely powerful in mobilizing communities and channelling their experience in delivering programmatic goals. Regional cooperation among nations for HIV prevention will significantly contribute to access to health services to migrant workers. 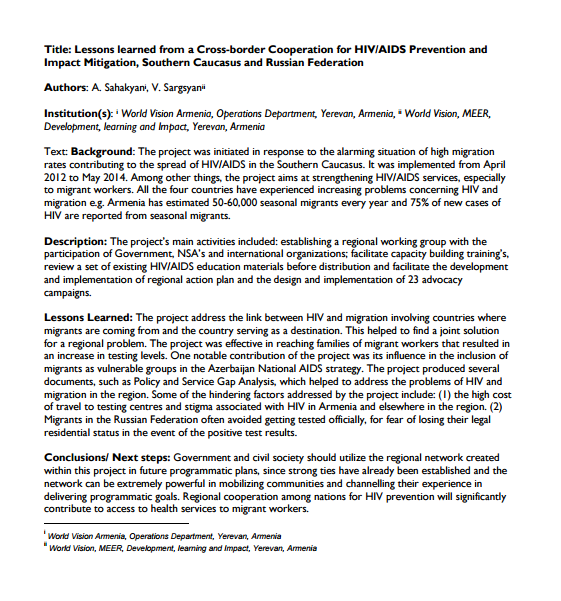