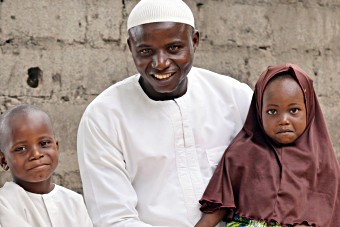 Yusuf Ibrahim is a devout Muslim. He is also a convert: not in his religious faith, but in his beliefs about immunisation.

Firm-jawed, sitting with his broad shoulders back and his hands placed firmly on his legs, he speaks with passion, recalling a time when he drank in the words of people he considered more learned than himself, accepting them as gospel. “Elders told us vaccinations were there to control the population. Everyone believed them – they believed it themselves – so why would I think anything different?”

Rumours that vaccinations are the product of a Western plot to ‘control the Muslim population’ abound in Nigeria, although no one is entirely sure of their origins. Growing up in a tiny farming village an hour away from Minna, Niger State’s capital city, Yusuf was told this as fact.

“At some point – I don’t recall when – I was told that vaccinations make men impotent. It made sense to us. The elders told us, ‘Why else would these people who don’t know you give you anything for free? They are doing it for family planning.' And at the time I believed it.“

It took a near tragedy to change his heart and mind. Yusuf will never forget the vision of his first-born daughter Saratu, then two years old, when she became dangerously ill. She was coughing and she found it hard to breathe. Then she grew tired, and then limp.

His wife begged him for days to be allowed to take her to the doctor and then, with more desperation, to the hospital. As life seemed to drain from her body, her condition raised the spectre of the heart-breaking events that repeatedly befell the small rural community where Yusuf grew up, as young children were snatched from their families.

His beloved daughter had pneumonia – an infectious disease that globally claimed the lives of 1.3 million children under the age of five in 2011, of which 129,000 were in Nigeria.

“I looked at my little girl and I knew what was going to happen,” says Yusuf. “When I was a young man I saw plenty of children die. I knew how they looked, and it was my little girl that looked that way now.”

Yusuf had been told by his village elders to stay away from hospitals and Western medicine altogether. Frantic at the thought of losing his first child, he agreed to allow her to enter a hospital.

“I don’t know what they did, but they gave my little girl life again,”says Yusuf.

He began to talk his beliefs through with the physicians, and gradually they convinced him that they were there simply to preserve life and that had his child been given the right vaccination, she might have been spared this ordeal.

A decade after his first born faced death and stared it down, Yusuf, now aged 32, is an advocate in his own community: Unguwar Daji, a shanty town without regular power or sanitation services straddling the northern edge of Minna. He makes his way through the maze of streets and orange-dusted back alleys, knocking on the doors of semi-permanent homes with corrugated iron roofs and explaining to families why immunisation is so important.

“If a man’s wife has just had a child, I go and speak to the man and tell him why they need to have a vaccine. And they believe me because I am one of them. We work the same jobs, we are from the same villages, and they see that all of my children have been vaccinated,” he says.

Unguwar Daji is populated entirely with families like the Ibrahims, poor folk who moved to the city from small villages in search of jobs, desperate to make their lives – and those of their children - easier. Many of them still cling to the old ideas about vaccination.

It will take time, and a strategic campaign to educate them – everything from talking to elders to asking pop stars to write songs about the benefits of vaccinations.

For the most diehard believers, however, Yusuf’s arguments seem to be the most effective weapon. He cannot read, but he is an eloquent spokesperson.
It is time to walk alongside his neighbours to the mosque for Friday prayers, and Yusuf has donned a pristine cream-coloured shalwar kameez. He is surrounded by his four, perfectly groomed children – among them 13-year-old Saratu.

“This is my family,” Yusuf says with a broad smile. “God is great.”

*Original article posted by GAVI Alliance. You can read it HERE.