At one of the displacement camps in northwest Syria; there are two families crammed into an ill-equipped tent, that lacks even a window. Walking outside the tent leads to the small kitchen next to the tent door. The kitchen has very few groceries and cooking equipment, which are inadequate for the number of people [15 persons] staying there. Their life is made more difficult by the precarious conditions during winter, when extremely low temperatures (-3 C to -5 C) and snowstorms pose a serious threat to human life.

Winter is their worst enemy.  They mostly depend on blankets, and they burn anything they find, such as wood or old clothes, placing them inside an old, emptied gas fireplace to keep themselves as warm as possible. This puts them at another risk as they could get burnt or suffocated while sleeping. When it rains, mats and blankets get wet as water leaks into the tent, and they struggle to dry them. That's all they have to keep them safe and away from the shelling.

Thirty two-year-old Samar*, her husband, and their five children are one of the two families to live in 3 x 4 m tent. The family appeared in this state due to their difficult financial situation, making them unable to afford a tent, so they are hosted by Samar's sister and her family, all in one tent. Without any privacy for any of them.

Life before it all began

Samar lived a decent life, living in their village in northern Syria, in their own home. Her children were feeling safe. At that time, Samar's husband could provide for his family, he even ran his own business. All of that vanished in the blink of an eye when the bombing began, forcing them to flee. Her husband became disabled after being injured. War imposed on Samar to be the sole breadwinner, adding a new burden to her already-heavy load.

Samar never forgets that horrible day: "It was a very difficult day. I feel extremely scared when I remember. We heard very strong noises and suddenly the planes started flying in the area. We heard the sound of bombing and the demolition of our neighbours' house. My husband was injured that day."

The family passed through a stressful two-year displacing journey. As a result, Samar's health deteriorated, leading to the development of diabetes when she was only 22 years old. This significantly impacted her psychological state, becoming a roadblock in her way. Samar and her husband require medications. Unfortunately, they obtain only them when available for free at the camp's medical centre. Lack of money was a great factor in being unable to maintain a healthy diet, she ended up with losing 11 kg. Therefore, diabetes-related seizures strike, impairing her physical movement and preventing her from going to workplace. This then had a snowball effect on their living conditions.

"I was thinking of ending my life, I couldn't stand anymore and cried every time my children asked for something that I couldn't meet."

"I was always feeling hopeless, sad, feeling depressed and helpless," Like every mother, Samar's main concern is to protect and support her children, but due to her psychological state, she needed to heal and help herself first." I was afraid for my children. Who would give them what they wanted and who would take care of them? So I was holding back from this idea," Samar added.

Samar became more sensitive, nervous, and unable to control her feelings, so she felt heartbroken. She was aware this was not healthy for her children's mental well-being and decided to seek help. "I found my passion and the thing I love and improved myself".

Fortunately, Samar's life seemed to take a positive turn when she started thinking of herself, especially after learning about a protection project [through a friend of her] implemented by World Vision in northern Syria. It aims to empower women to enter the labour market through vocational training in different sectors. Samar is one of the 449 women who enrolled in the sewing course, where she picked up a new skill. "I now have a certificate in the sewing profession, and thanks to it, I am currently working in a workshop," Samar mentioned.

Along with that, she received psycho-social support, which offer advice on the impact of encouragement on children, the wrong ways to raise them, dealing with their traumas, and promoting their self-confidence. Samar and 1,334 other women attended awareness sessions, and learned how to deal with conflicts, set goals, solve problems, and make friendships. "I attended physical lessons in the centre, as well as videos sent on WhatsApp groups, in addition to awareness sessions, all of this contributed to improving my psychology and made me able to face depression". Samar recalled.

Samar now has high hopes and aspirations for the future. In the past six months, she started overcoming her insecurities, facing her emotions, and discovered a passion. She wishes to support her husband in getting the treatment he needs to recover. She also hopes to run her own sewing workshop to give her children the best possible upbringing.

*Names have been changed to protect identity. 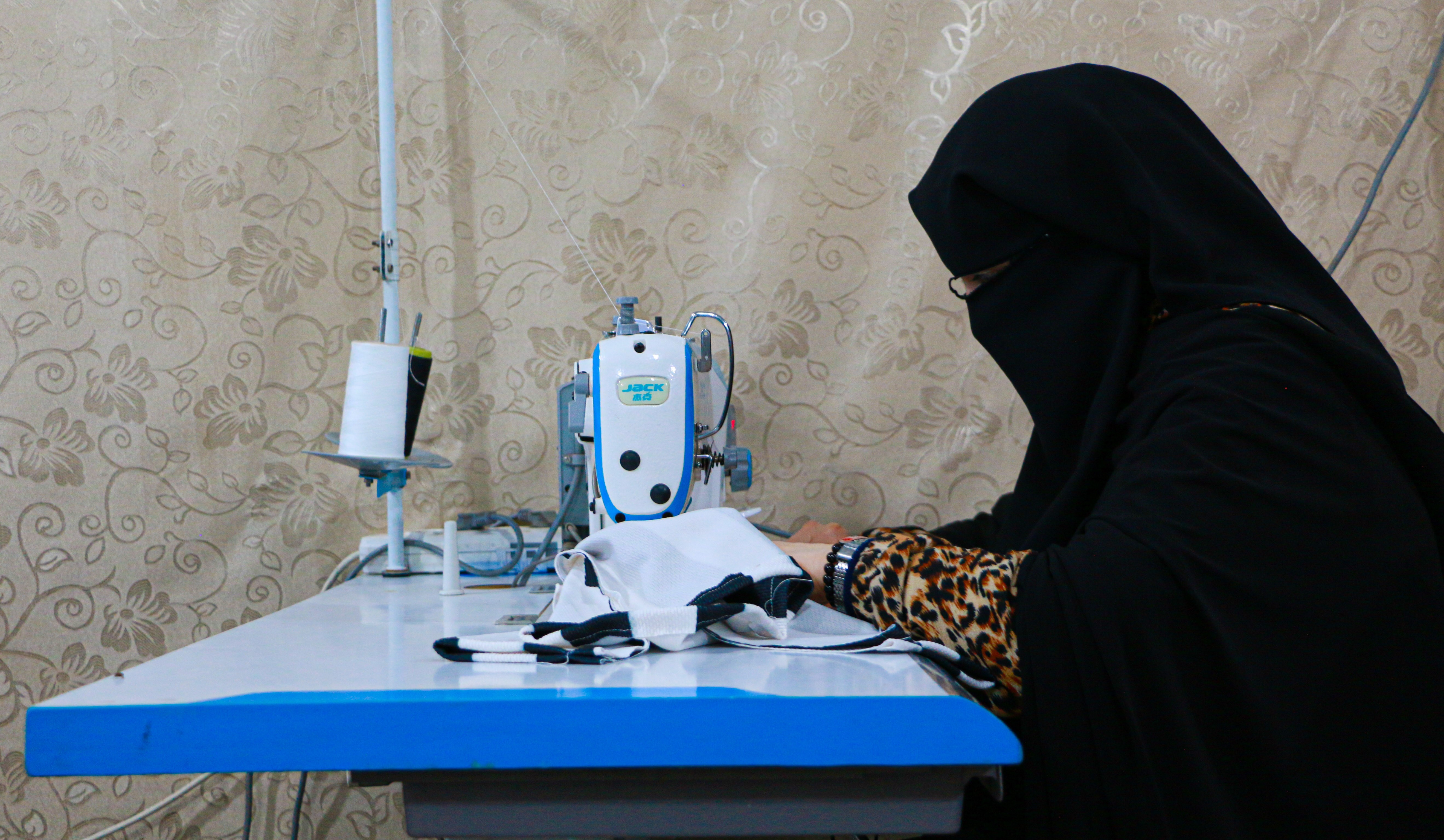