“I love playing with my friends, but when I am hungry it’s hard to play because I feel weak and my abdomen hurts. Every time when we have not had a meal, I feel that way,” says 7-year-old Maggie as she touches her abdomen.

Maggie is a lively young girl who enjoys chasing butterflies with her friends. For a girl of her small stature, she does not fear climbing up tall trees either. “I love climbing up mango trees to pick mango fruits to eat,” she says as her 67-year-old grandmother, Josephine Sichundu, listens intently nearby almost ready to scorn her for her misadventures.

Josephine lives with her three grand-children Maggie, 7; Mary, 9, and Mirriam, 19, who is crippled. They live in Musokotwane village in the Kazungula district in Southern Zambia. Kazungula district is among the regions most affected by drought in Zambia.

According to the Zambia Meteorological Department (ZMD), the 2018-2019 rainfall season was one of the driest that the southern half of Zambia has experienced since 1981, negatively impacting crop production and consequently food availability and accessibility.

Josephine has had a tough time caring for her three grandchildren during this period. “It has been really hard. I constantly worry and last year I was hospitalized because I developed high blood pressure,” she says, “The doctor told me, 'you worry too much.' I told the doctor that it was impossible not to worry because I have three starving children at home and one is a cripple with little hope in sight.”

Mirriam became ill when she was a baby and her condition has worsened over time. “Mirriam’s mother abandoned her daughter when she was a baby when she noticed that her condition was deteriorating,” Josephine says. “She does not even come to see her. So, now I am struggling because the oldest girl in the house, who is supposed to help me during this hard time, is bedridden,” she explains. 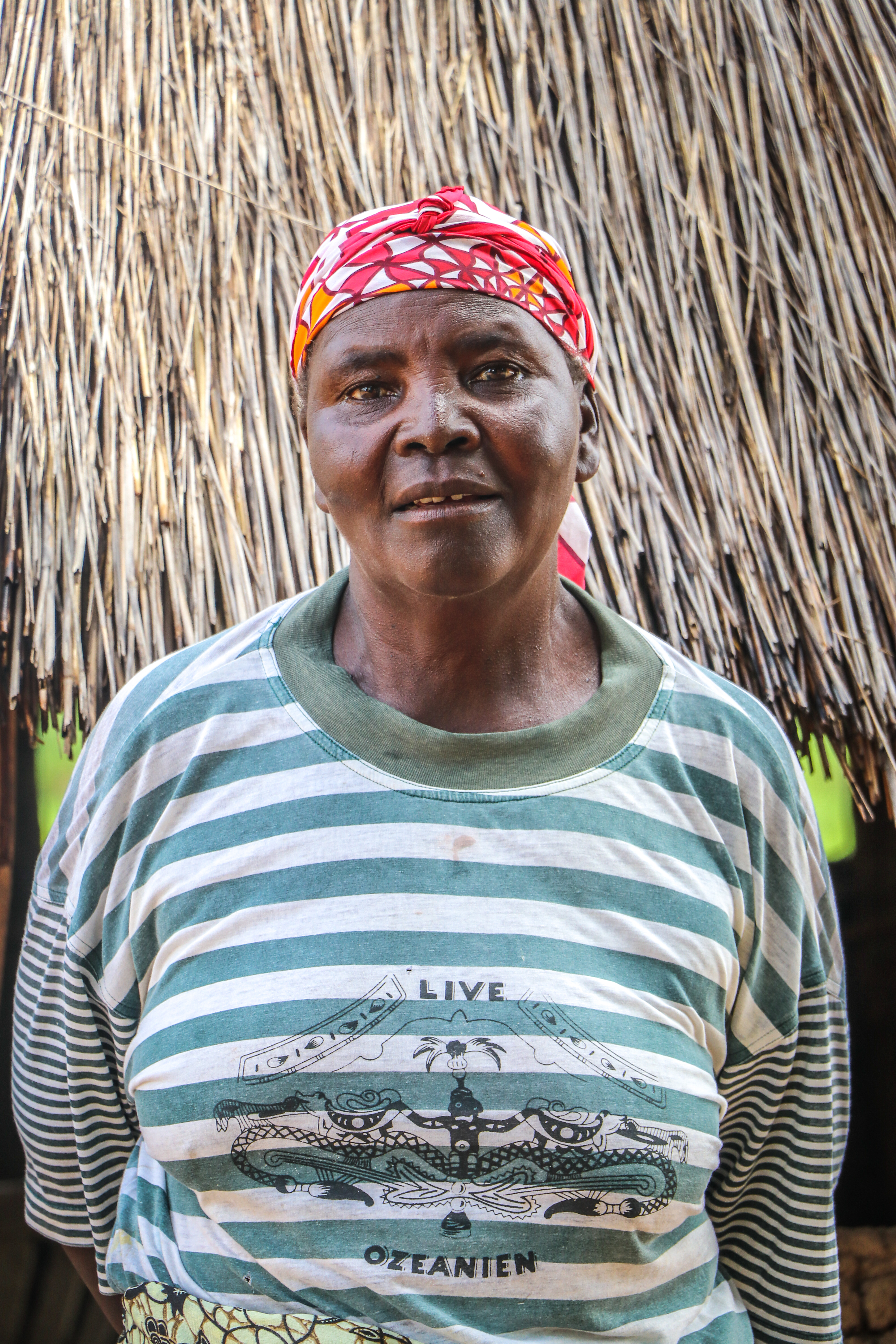 Josephine remembers a time when she used to receive financial support through social cash transfers from the government, from the Department of Social Welfare, to help her look after her crippled grandchild. However, that stopped two years ago due to funding cuts to the department.

Coupled with the crop failure, caused by the erratic rainfall and eventual drought, Josephine says, she lost everything. “I was hoping to harvest 30 bags of grain for sale and for home consumption to last us till the next farming season, but everything was destroyed because of the poor rains last season.”  The situation reduced Josephine and her grandchildren to beggars and scavengers.

The chickens which she had as a primary livelihood resource and served as a coping strategy are all but gone. “I sold 10 of my chickens, in order to buy grain and other foodstuffs for my grandchildren. I only have four chickens left”, Josephine said, “I was forced to go from house to house to beg for food, but it was hard because even my neighbours have little to share”.

“When there is little or nothing to eat, Mary and Maggie often go in the bush to pick wild fruits so that we eat,” she added. “Mirriam does not eat the wild fruits her sisters bring because they choke her as she has a hard time chewing due to her [condition].”

“Mirriam can't talk, walk or move.  I have to do everything for her, including feeding her by forcing food down her throat.  In the absence of food and money it has become increasingly difficult to do that,” she bemoans.

The family often eats only one meal a day, usually at lunchtime.“I do not like it when there is no food at home. But grandma tells me it’s because there is no money to buy food,” says Maggie.

The family was counted among the more than 2.4 million people who were expected to be severely food insecure during the lean season (October – March), according to the 2018/19 Zambia Vulnerability Assessment Committee (ZVAC) / IPC report.

World Vision International declared a Multi-Country Response to help families affected by the drought Zambia, Zimbabwe and Angola. Following the declaration, in Zambia, World Vision teams have scaled up their response efforts, focusing on providing life-saving humanitarian assistance in the short term and early recovery efforts in the medium term.

“Each beneficiary household receives 60 kgs of maize meal, 4.5 litres of cooking oil, 12 kgs Beans and 500 grams of salt in addition to seeds for cultivation.” Says Bernard Zgambo, Director or World Vision's response in Zambia. “This aid is reaching the most vulnerable families, especially children and communities in the hard to reach areas," he adds.

Josephine says that when she heard that World Vision was coming to her village to start distributing food she prayed that she would be among the beneficiaries targeted.

“I was so happy when I was picked as one of the people to receive food aid for the guaranteed period of six months. It was an answered prayer. Now I am assured that my grandchildren and I will have something to eat every day,” she exclaimed with delight.  “I now have more time to look after my grandchildren more, especially Miriam, instead of constantly worrying about what food to eat. I also have time to focus on the field to ensure that I harvest something next year."

With the ongoing food distributions, the tide is beginning to change for the many children, like Mary and Mirriam, who were wasting away.

“I am grateful for the support that I am receiving. With the seeds I have received I have already prepared the land and planted.” I hope the rains will not disappoint us like last time,” she says.

With support from Department for International Development (DFID) and in collaboration with UN agencies and other humanitarian partners, World Vision is working with the Zambian government to distribute lifesaving humanitarian aid to families and save lives.

World Vision aims to provide 1,932,000 people with immediate assistance to cope with the effects of the drought. Approximately $43.2 million (USD) is still required to meet the urgent humanitarian needs in Angola, Zambia and Zimbabwe. The response aims to provide food assistance (in-kind, cash and voucher), nutrition services, food security and livelihood assistance, protection support and activities to improve access to safe water. A twin-track approach will be adopted, consisting of life-saving relief efforts as well as investment in longer-term recovery efforts to address the root causes of the crisis.