In the scorching midday sun, somewhere in Bidibidi Refugee Settlement, under a tree shade, the sun’s rays cut through the leaves over a group of five children, each sitting on a plastic chair, safely keeping social distance. They are listening attentively to a young man standing in front of them.

The young man is 23-year-old Santos Gogonya. Clad in a nylon coloured  shirt, black trouser and pink moccasin shoes. He paces from side to side, stressing a point with hand gestures. The children are glued, their gaze following the teacher’s hands. Behind the teacher, against a tree, leans an old greyish blackboard, which dances and screeches whenever he writes.

Santos is a young teacher from South Sudan. His passion is evident in his delivery.

A textbook in one hand, he begins: “Today, we are going to look at subtraction of whole numbers, without regrouping.”

Whatever that means, his class of five seems to understand it better than me observing from a distance.

The class goes on for about 30 minutes, questions are asked and all five enthusiastically participate in the lesson. Teacher Santos discourages giving chorus answers, urging each one to raise their hand when they would like to give an answer.

Towards the end of the class, Santos gives an exercise. One pupil fails the exercise. He marks the exercise from a distance, doing whatever he can to minimise contact.

“I ask them to hold their books high for me to see their work. If one has got it right, I speak out and say that that is correct. If it is wrong, I still declare and encourage one to do correction,” he says.

After the innovative marking exercise, corrections are done for those who got it wrong.

On his shaky blackboard, Santos writes the take home exercise for the day. He says this helps to keep the children engaged until the next class. And with this, class is dismissed. 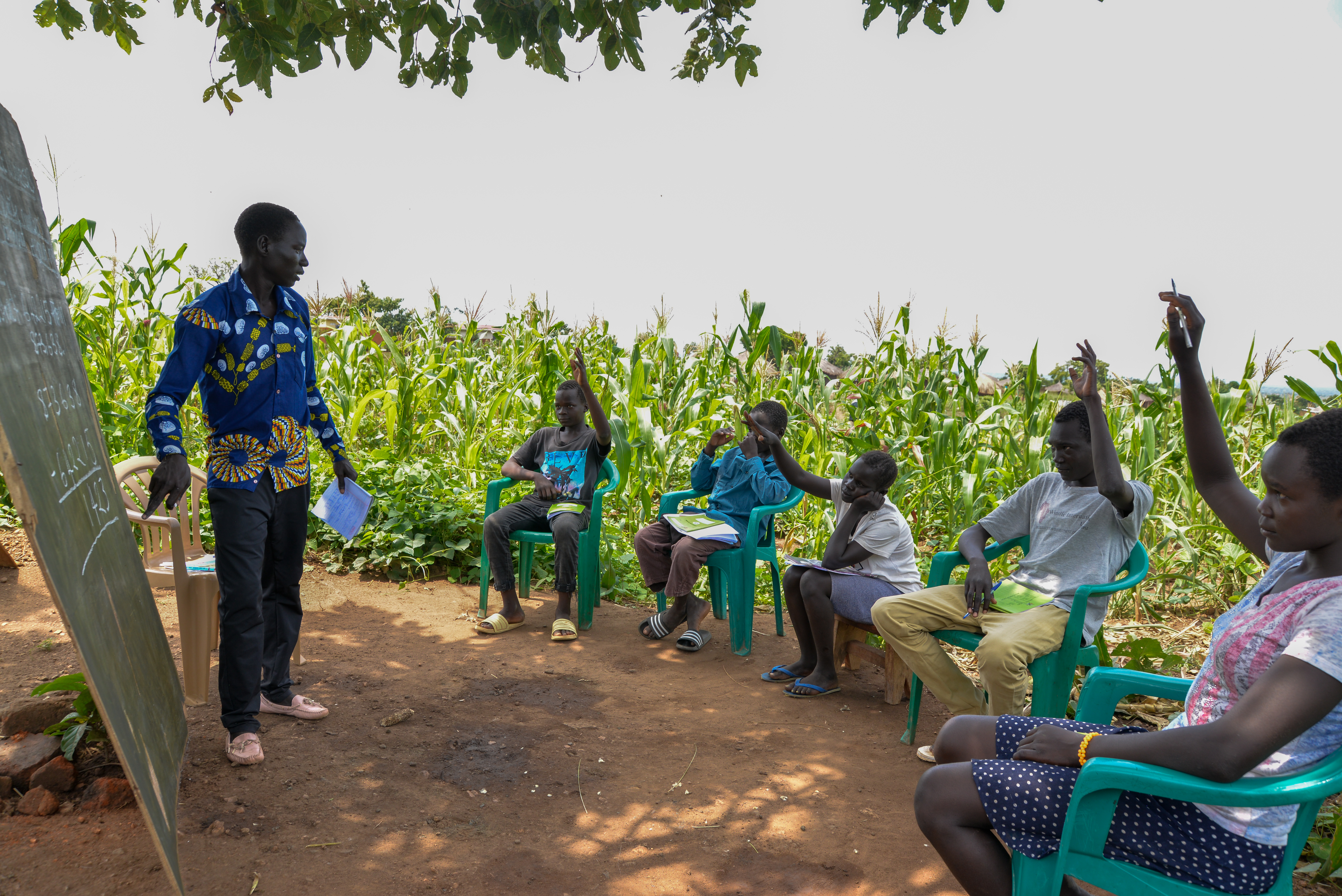 In Uganda, according to statistics from the government, over 15 million children are currently at home due to the closure of schools following the COVID-19 pandemic. The government and developing partners have introduced ways to ensure that children continue learning at home. This is primarily through radio and television, and some reading materials that have been distributed across the country.

Santos, however, feels that the new mode of teaching through media and pamphlets has largely left communities like his out.

“The government has introduced e-learning and learning through media like radio and television, but these have their own challenges,” he says. “Most learners here in the settlement have no access to radio and television, a few that have radio still struggle with follow up questions that often go unanswered. The radio limits the student-teacher interaction which is so important.”

Santos adds that subjects like mathematics, which he teaches, are also hard to learn on radio. Pupils need to see what the teacher is solving. He says the reading materials that have been distributed are too general and sketchy for children in rural and settlement schools.

“The pamphlets are sketchy, they are very general and only target children in urban schools. Our pupils in most cases are a little behind, so it is dangerous to assume that they are at the same level as everyone else,” he argues. 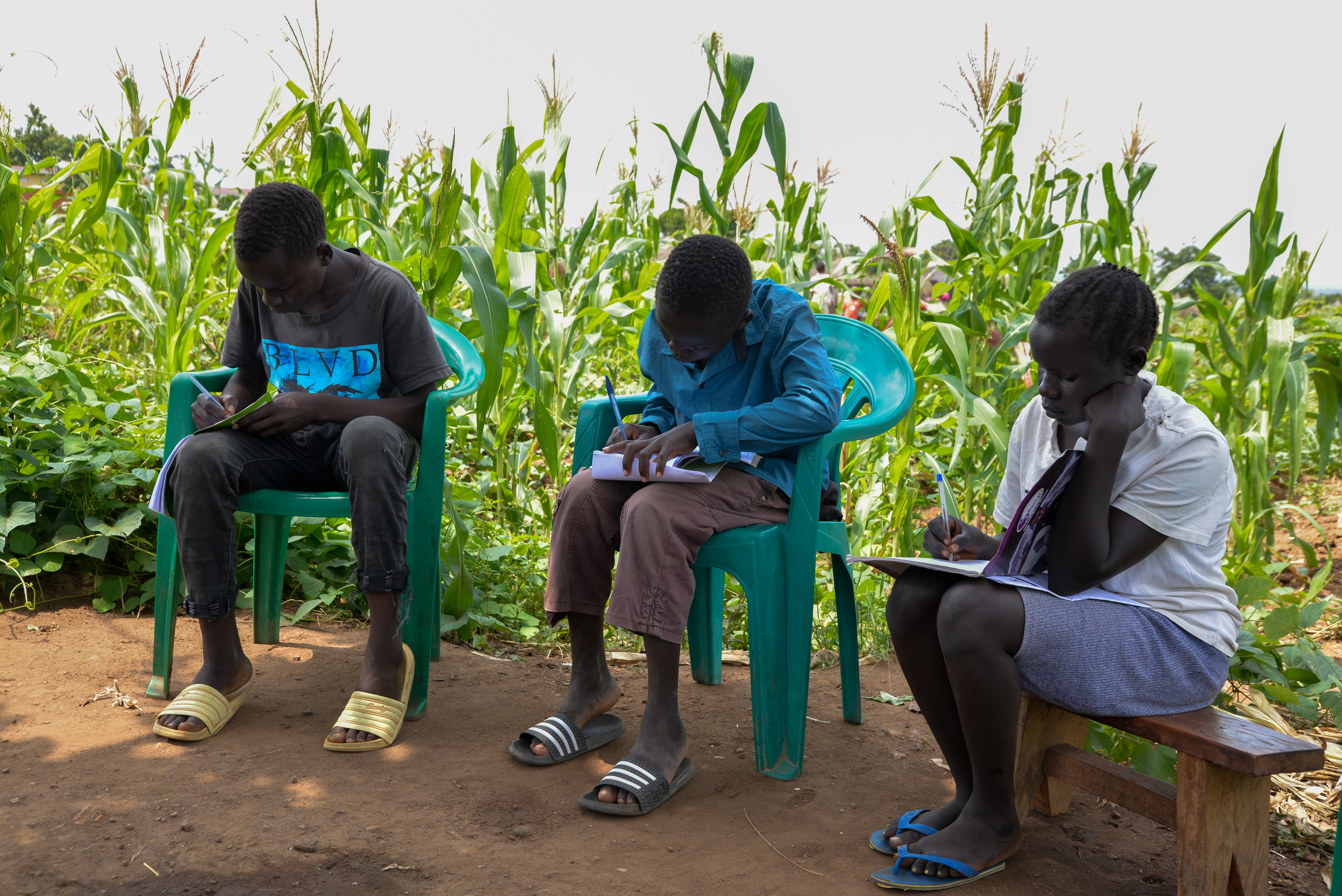 Coming to the rescue

Santos joined teaching specifically to help children in his community to better understand what the teachers are teaching. He says when the refugees had just arrived, most of the teachers were from the host community and used English as a medium of communication which was hard the majority of children.

“After seeing how children struggled to learn under the teachers from the host communities, I was encouraged to join a Primary Teaching College (PTC) and learn the skill to help my people. I got a half bursary from one of the NGOs here and that is how I started.”

In 2019, Santos started teaching at Rockland Primary School in the settlement.

When schools closed in March, he realised how the children were struggling. They had become idle at home, some of them were overworked by their parents, and a few girls from the village got pregnant. This pushed him to start up his mobile teaching, working voluntarily during the lockdown.

“I started with groups of 10, but the government later declared that such groups were also prohibited. I moved to five,” Santos says.

With the help of a local organisation, Ebenezer Global Hub, Santos has secured a hall near his home, with proper seats that can accommodate 10 children while following the requirements of social distancing. He has now written to the government officials in the settlement to allow him to teach groups of 10 again.

Ensuring safety for himself and the children

Santos ensures that wherever he conducts his classes there is a handwashing facility. The children as well as him have to wash their hands before and after the lesson.

He also teaches in the open mostly to allow enough space for social distance. While teaching, he keeps a distance from the children and he does not move around the class as he would normally do. This is why he has introduced the innovative way of marking the children's work from a distance.

What others say about Santos

Dube Bernard, Santos’ elder brother says he is so proud of the work his young brother is doing in the community and is ready to support him all through.

“We are ready to support him as a family. He has always liked teaching and when he noticed the need during the COVID-19 lockdown, he stepped up to help,” Dube says.

Edna Oponike, Santos’ wife sings her husband’s praise. “I feel so happy to see how everyone in the village speaks about him. He is our hero. He walks across the village teaching various groups and no one pays him a coin. He does it from his heart,” she says.

Judith, one of the children in Santos’ class, says Teacher Santos makes studying easy for them. “We come here every day at 2:00 pm and Teacher Santos teaches us Mathematics and Science. When he is teaching, we understand everything. Today he taught us subtraction of whole numbers without regrouping, and we enjoyed the lesson,” she says.

World Vision Uganda has just launched its second phase of the COVID-19 response which largely seeks to support learning continuity in vulnerable communities and also support communities in the post COVID-19 recovery process. The Phase II Response, among other things, will involve the distribution of more simplified learning materials and support teachers like Santos with protective equipment to ensure that learning happens in a safe environment.