Imagine competing for contaminated river water with animals. Now imagine trying to do it with a disability. Two years ago, that was life for some South Sudanese refugees in Omugo Settlement in Terego District.

Collecting water was a challenge for everyone. Every day people lugged heavy jerrycans filled with polluted water from the River Enyau to use at home.

Alternative to river water were a few water points whose taps were often dry. It was a common sight to see women and children stand for long hours in queues to get water. Sometimes, it took three days for the water to return. But it would disappear again before everyone finished.

This forced many to resort to dirty river water for survival.

“We had no option but to use river water. It was the nearest point where we would draw water for daily use. For water meant for drinking, we boiled it but it still maintained its dirty colour. It even changed the colour of the food,” says Rerida Daawa, a mother of five.

There is a borehole in the neighbourhood, about three kilometres away. However, accessing the water was a challenge for most refugees. Besides queuing up for many hours, the host community was not friendly.

“They always demanded part of our monthly food ration in exchange for water,” says Rerida. “Sometimes you would move that long distance only to come back with an empty jerrycan because you had nothing to offer in exchange.”

Rerida and her children were always suffering from waterborne diseases because of the dirty water. The story was not any different for all other families that depended on water from unprotected water sources like the River Enyau. “We suffered from typhoid, diarrhoea and skin itches,” she says.

The mother of five also cares for her 52-year-old father-in-law, Bernard Meenu, who lost his right leg to a landmine back in South Sudan. “I stepped on the landmine when I was heading to my garden but I thank God that I survived. I was bed ridden for five months but I came out of hospital still optimistic about life,” says Bernard.

Bernard who has been twice in Uganda as a refugee says his condition cannot allow him move in search for water. He depends on his daughter-in-law, Rerida, for almost everything. “I’m confined here in my neighbourhood,” says Bernard. “The water scarcity had not helped the matter. I felt more helpless.”

In 2019, World Vision, with funding from the Ministry of Foreign Affairs of Finland, constructed a motorised water system relieving more than 34,000 people from the burden of looking for water. Sixty-six percent of these are refugees like Rerida and Bernard.

“I was overjoyed when World Vision constructed a water point a few metres from my home. We’re now assured of adequate safe water any time. Water is our liquid treasure. World Vision has given us another lease of life. Thanks to everyone who made this possible,” says Bernard.

Like Bernard, Beatrice (12) has physical disability.  She is able to collect water for her household at an inclusive water point near her home, a thing that was not possible before. “With this wheelchair I received from World Vision I am able to do a lot of things, including fetching water for my family. I’m grateful to World Vision for the wheelchair that has made my movement easier and for the water. Life is beautiful!” Beatrice says.

Besides bringing water closer to the community, World Vision distributed more than 1,000 water containers to households of persons with disabilities to ensure safety of drinking water.

“The project intends to build the capacity of communities to manage their water resources better,” says Dithan Mukiibi, the project manager.

With the water now flowing constantly, girls like Beatrice and mothers like Rerida don’t have to worry about long distances and hours anymore. Neither should they be concerned about waterborne diseases. “Stomach-related illnesses have since stopped in my family,” says Rerida with a smile.

And best of all, now there’s water for all. 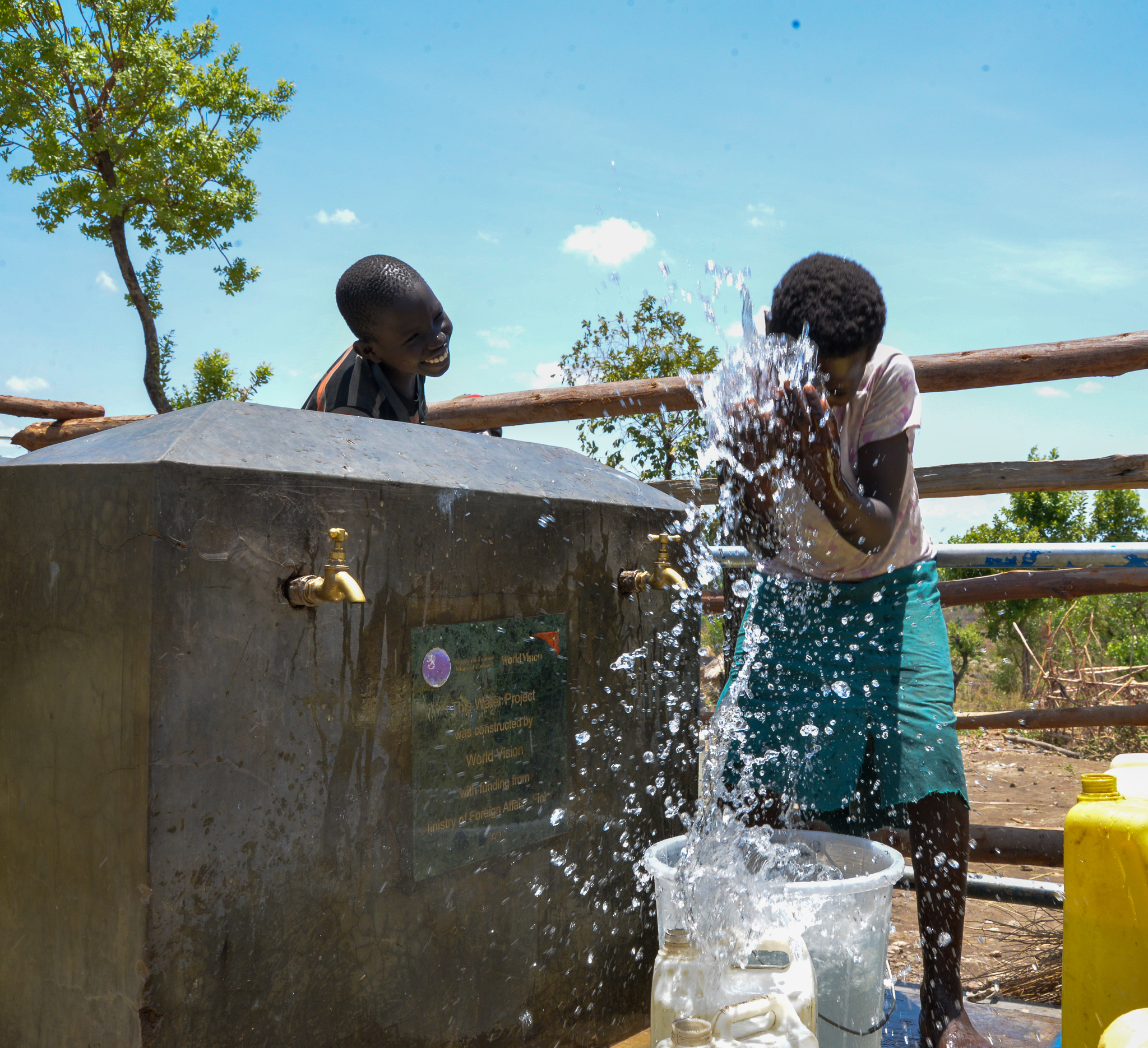