“From 2017 to August 2021, we have recorded 388 cases of teenage pregnancy for girls aged 18 and below. The high numbers of teenage pregnancies that we record at the health centre are alarming. This did not sit well with me. I was uncomfortable with the number of young girls dropping out of school as a result of getting pregnant. Therefore, I challenged myself to help reduce the prevalence of the vice by engaging both children and their parents on the importance of education for children; especially the girls in Chimba Community”, says 29-year-old Luyando Hakanyanga, a nurse at Chimba Rural Health Centre.

Adolescent pregnancy is one of the biggest problems facing girls in most rural parts of Zambia. It reduces girls’ opportunities for education because pregnant girls often drop out of school earlier than boys. Fewer return to continue their education, and lack of education perpetuates poverty among girls, women, and their families and communities. Chimba Community has one of the highest rates of teenage pregnancy in Mungwi District of Northern Province.

“As a result of teenage pregnancy, some of the girls were married off, and most of them have dropped out of school. So. to tackle the problem, there is a need to address the root causes, which include ignorance due to lack of information. So I decided to conduct awareness meetings with the girls and boys in schools, educating them on sexual reproductive health and the importance of education using World Vision’s Ending Child Marriage flip charts and mat,” explains Luyando. 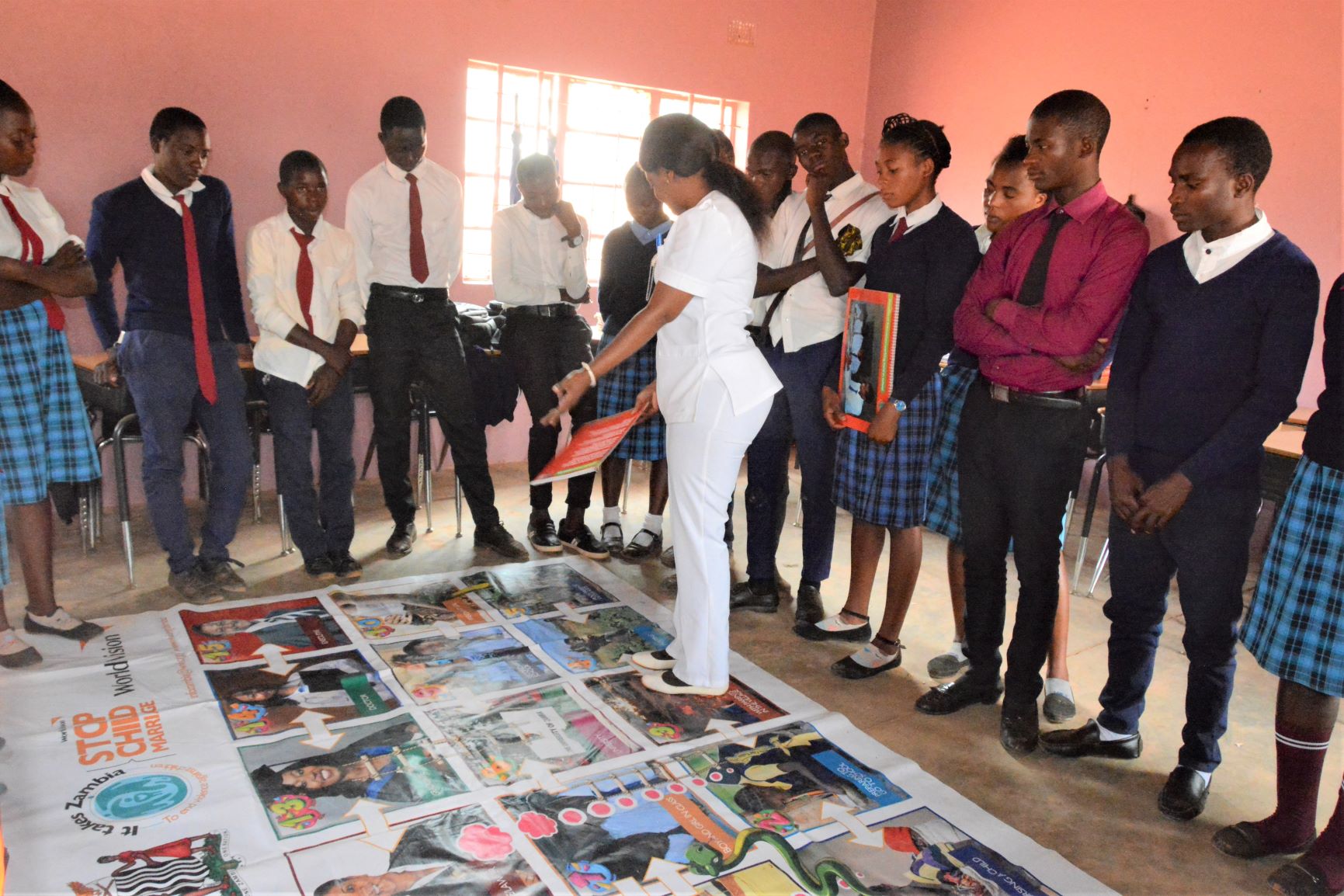 The only female nurse at the facility, Luyando describes the materials as self-explanatory and easy for a child to understand. “The mat shows different scenarios that a child can do to achieve their goals and also steps they can take if abused", she says. "It depicts how children’s future can be destroyed by marrying early and difficulties faced by a poor household. The flip chart shows roles that all members of the public including children, can play to end violence against children in the communities”.

She further adds, “It also shows how different women, who were once girls are now educated and executives in different organisations. The best examples I give include new Republican Vice President Honorable Mutale Nalumango and the past immediate Vice President Ms. Inonge Wina. I use two powerful women as great examples to inspire children in the community to work extremely hard for them to be responsible and better leaders in future.”

Luyando attributed children’s and parents' positive responses to her being a nurse. “Being a nurse at the Chimba Rural Health Centre has also helped me because members of the community easily relate with me. I command some respect because of the position, and I am maximising this respect to interact with girls and boys on the dangers of child marriage", she says.

"Sometimes I use myself as an example so that girls can aspire to serve their community in different capacities”, adds Luyando. “I deliberately target girls and boys in schools for them to spread the knowledge among their out-of-school friends. The community is vast, and as such it is very challenging for me to reach the furthest villages. But through the pupils who I consider as Agents of Change, I make sure that information is reaching the entire village. One thing I noted was that most children in the community do not have someone they can confide in. Most often, they keep problems to themselves. Consequently, they end up making wrong decisions. I have, therefore, introduced an open-door policy to encourage children to come to seek help whenever they need to. And I have seen some positive feedback because I receive on average five children on a daily basis.”

The 29-year-old nurse expresses happiness with the positive feedback from children and their parents resulting in some girls returning to school and others becoming peer educators.

Triza, a 17-year-old pupil, says “The interactions with the nurse have instilled confidence in me. I am motivated to work extra hard for me to achieve my dream of becoming a medical doctor. Previously, it was hard because we didn’t have anyone to look up to for inspiration or someone to encourage us. She has made me and other pupils understand that the future we want is in our hands and is attainable with determination and focus.”

Luyando adds that child marriage and teenage pregnancy are community problems needing community support. “The problems facing children cannot be addressed without the involvement of parents. Often, parents are the ones that marry off young girls to old people for various reasons. Working with the Community Child Protection Group, we reach out to parents with messages on child protection and their role in ensuring that children get educated. So far, there is buy-in from the parents; they are very supportive and usually report cases of child abuse in the community.”

“We appreciate the efforts by World Vision to sensitise us on child protection issues", says 42-year-old Naomi Mulenga, a member of the Child Protection Committee. "The information has empowered us to make sound decisions. Before, it was easy for a parent to marry off a child because we thought it was the best thing to do but now, even if a girl is impregnated we encourage the child to go back to school and we remain taking care of the child. We can change our poverty levels by educating our children.”

World Vision's Ending Child Marriage Campaign Coordinator, Mr. James Zimba, says it takes the efforts of all community members to find solutions to problems facing their community. “Our role is to empower communities with the knowledge to make sound and beneficial decisions for children", he says. "Most members of the communities lack information, so we work with traditional leaders who are the custodians of traditional customs to support the fight against child marriage. To that effect, we have trained over 700 traditional leaders on ending child marriage.”

Young girls have the right to education, health, dignity, non-discrimination, and quality of life. Protecting, promoting, and fulfilling these rights is necessary to ensure that girls grow into healthy, skilled, productive, independent, and responsible adults.