In 2014, Maputo Action Plan (MAP) paved the way to the mine free world by 2025 and called States Parties to the Mine Ban Treaty to demonstrate their commitment to the full, equal and effective participation of mine victims in society. European Union underpinned this initiative in its project “Integrated socio-economic support to landmine victims in BiH”. World Vision and Organization of amputees UDAS, implementers of the project promote survivors’ participation throughout the project in different ways. Organization of amputees UDAS, as association of survivors and a project partner, took a leading role in designing activities for meaningful participation of survivors.

Survivors’ participation in the society on equal basis to others is not only about their rights but also about their obligations. Survivors who have successfully recovered and integrated are expected to share and support their positive experiences and resources with other survivors in their rehabilitation, thus contributing to community development. Over the course of two years, this project has created opportunities to show that survivors are not mere spectators or passive audiences, but can be creatives and leaders spearheading other survivors in advocacy initiatives for their rights.

Exhibitions of survivors’ artworks promote their skills, talents and creative potentials and are ideal platform to communicate advocacy message to relevant institutions to create a “mine, barrier and victim free BiH by 2025”. 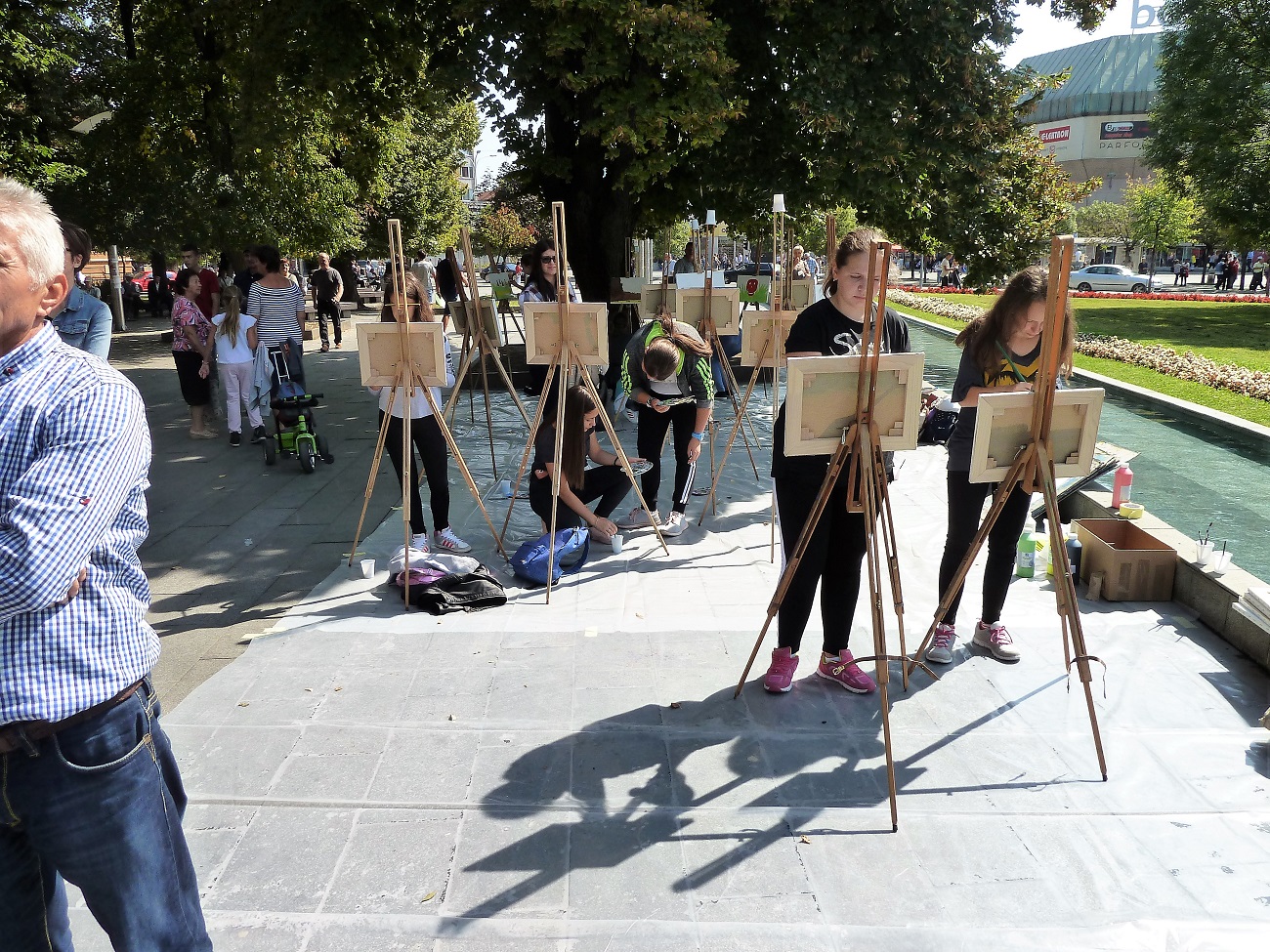 Child art colony on impact of landmines – Art colony It is all about abilities” in Banja Luka, August 2018

Landmine survivors and artists with disabilities, participants of the Art colony "It is all about abilities!” in August 2018 in Banja Luka, demonstrated interest to contribute and discuss how to raise public awareness of mine, disability and challenges issues facing survivors and people with disabilities in daily life.

Artists were painting in the central park in Banja Luka, a pedestrian zone that is very visited during the day. Many citizens were attracted by the way that Vahid Tirić was painting. Vahid is an artist from Vitez who is skilled in painting with his foot. Next to him, there was a group of children from mine affected communities of Banovići, Lukavac and Petrovo. They were given the “impact of mines” as a motive for their paintings and were encouraged to be creative and positive. They produced 15 paintings that mostly depict children near minefields, sending a clear message to the relevant institutions to demine local communities for safe childhood in mine affected municipalities.

Opening ceremony of the art colony was a great occasion for lobbying as it brought together public officials from the state and entity ministries and World Vision and UDAS seized this opportunity to urge those present to contribute to “mine, barrier and victim free Bosnia and Herzegovina by 2025”. 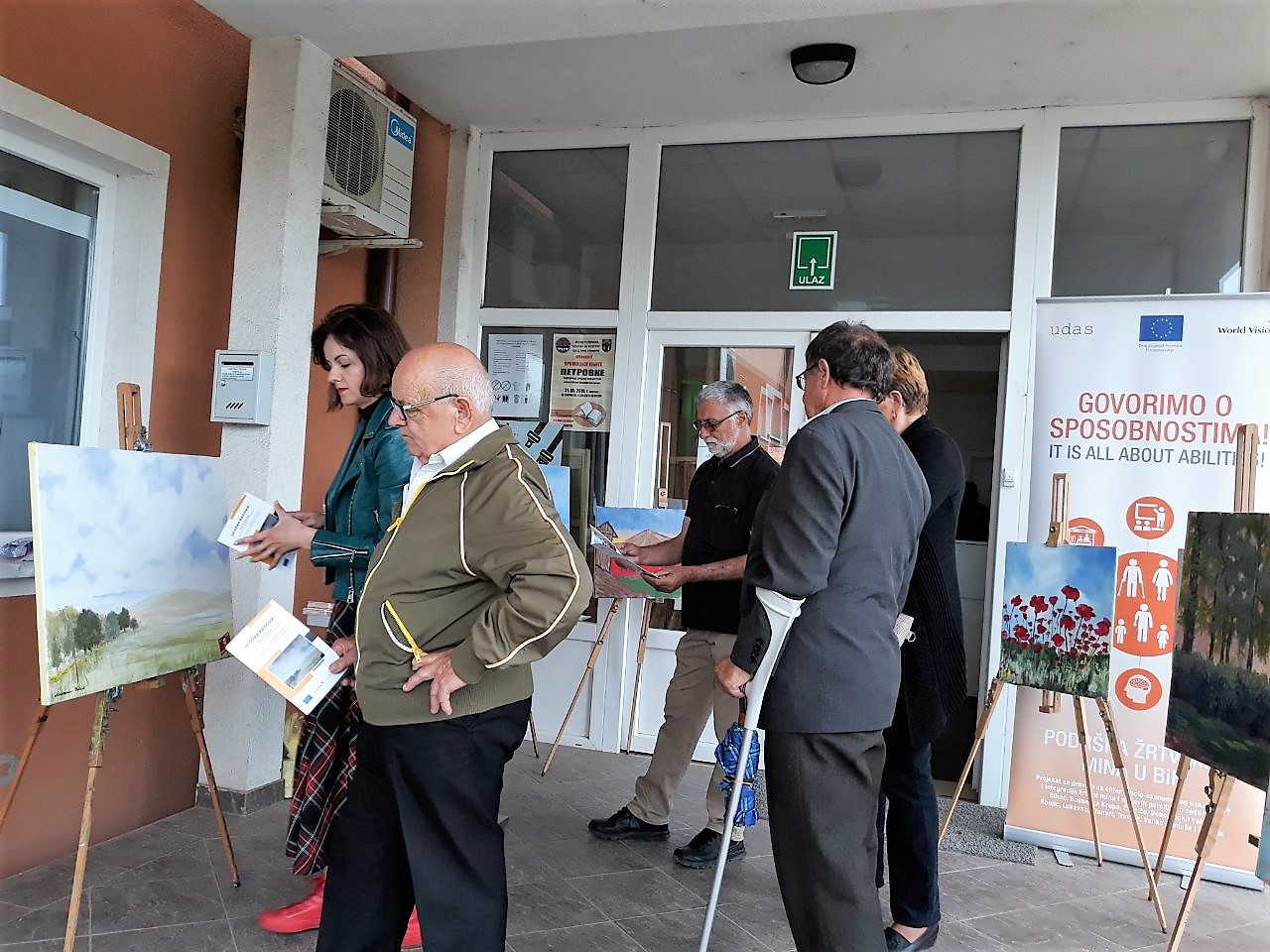 Exhibition of survivors and artists with disabilities’ artworks in the Health center in Stanari, May 2019

An exhibition of artworks produced during the art colony of Banja Luka travels to the 11 project benefiting municipalities and was visited by 2,100 citizens from February to July 2019. Opening ceremonies were mostly hosted by the municipality mayors. World Vison and UDAS talked to them, survivors and other citizens about the need that beyond the mine free soil, there is need to eliminate the barriers and create an inclusive social and economic environment where mine victims are empowered to fulfill rights and obligations as any other person of the community. 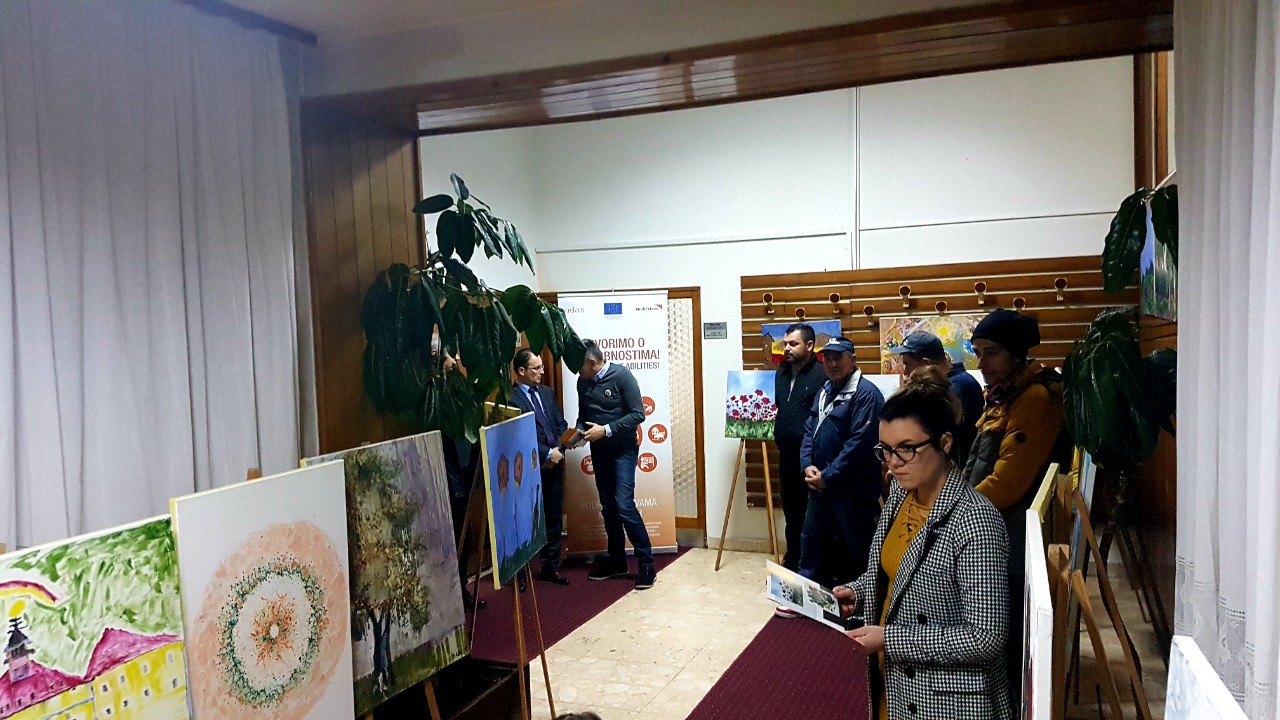 Exhibition of survivors and artists with disabilities’ artwork in the municipality hall, Velika Kladusa, February 2019

In Velika Kladusa, the municipality hall served as a gallery for artworks in which we welcomed local academic artists and general public who admired and praised the exhibited paintings of artist with disabilities.

Through the travelling exhibition in mine affected municipalities, the project emphasized the indispensable value of art in breaking social barriers and bridging socially constructed differences.

The project through art contributed to the promotion of the ambitious goal "Mine, barrier and victim free BiH by 2025!” and increased the participation and integration of mine survivors in the community and society.