It is a hot afternoon in Kenya’s Homa Bay County. The scorching sun is causing people to sweat profusely as they go about outdoor activities.

Some appear weak, tired and dehydrated.

However, as we approach the home of 54-year-old Charles Abongo’s in Onywera Village, the atmosphere changes drastically.

Irrespective of the sun’s heat, the over 900 trees in his homestead bring forth a cool breeze that is calming and soothing to the skin.

Charles notes that he has embraced tree farming for income generation, as well as for enhancing soil fertility and productivity in the farm.

From this business venture, he makes about 200,000 Kenya shillings annually from the sale of tree seedlings as well as firewood and charcoal.

“The trees have made my soil fertile. Therefore, I enjoy bumper harvests and additional income from other crops such as vegetables, maize and beans that I have planted in my farm.”

Despite the success, Charles’ tree-planting journey has not been devoid of challenges.

Key among them was the lack of knowledge and skills on how to harvest trees in a manner that sustains income generation and facilitates their conservation.

Charles notes that in 2011, when he began selling firewood and charcoal from trees on his farm, the profits were good.

However, after some time, he began experiencing a steady decline in income due to insufficient trees to cut.

“I found myself in this situation since we used to follow wrong techniques for harvesting such as cutting down entire trees in a way that does not give the room to regenerate.”

“In addition, we were also too keen on the profits that we forgot to establish an effective growing plan to ensure an all year round supply of trees.”

Charles eventually found a solution to the problem after learning about an approach known as Farmer Managed Natural Regeneration (FMNR) during a training workshop organised by World Vision.

Through this approach, farmers are encouraged to cut trees whilst leaving their stumps intact during harvesting. The stumps are important as they ‘give birth’ to the next generation of trees.

“After a few months, you will see multiple tree shoots sprouting from the stamp. They are usually crowded and cannot grow well if left like that. Therefore, you need to prune them and only remain with one or two strong shoots,” he says.

Irene Ojuok, the National Technical Specialist for Environment and Climate Change at World Vision Kenya notes that pruning helps the shoots to grow faster by reducing competition for resources.

In a couple of years, the shoots will develop into fully-grown trees that can be harvested for income generation.

Another sustainable harvesting method recommended in FMNR is the cutting of branches instead of whole trees.

This enables farmers to get income, even as the trees continue to grow and mature. 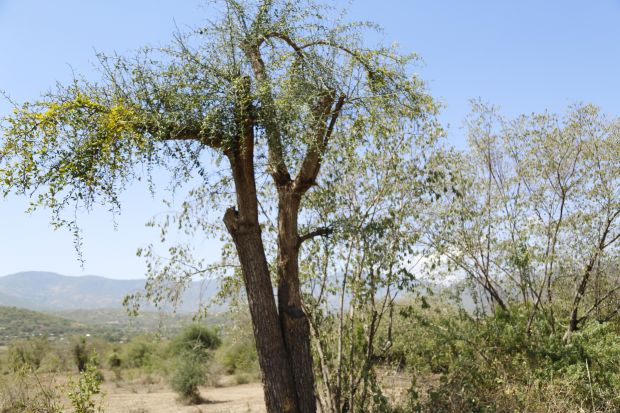 A tree with its branches pruned at Charles' farm.

“Trees take long to grow. So, you wouldn’t want to be cutting them all the time when you can still get firewood and charcoal to sell from the branches,” states Charles.

Nowadays, he rarely cuts down entire trees. He mostly relies on branches of the indigenous Leucaena and Acacia trees, which dominate his farm.

“I only cut trees when it’s absolutely necessary. And when I do so, I will select mature ones and ensure that I retain their stamps so as to encourage regrowth.”

Charles is among more than 60,000 farmers that World Vision has equipped with skills and knowledge on the application and benefits of the FMNR approach

Since he embraced it, Charles notes that profits from his farm have increased. This has enabled him to meet the needs of his nine children.

“Aside from paying school fees for my children and feeding my family well, I also use the money to purchase farm inputs and prepare land for planting food crops,” he says.

Biron, his 14-year-old son follows in his shoes.  When he is not in school, he takes an active hand in the business and particularly enjoys helping his father to nurture seedlings. 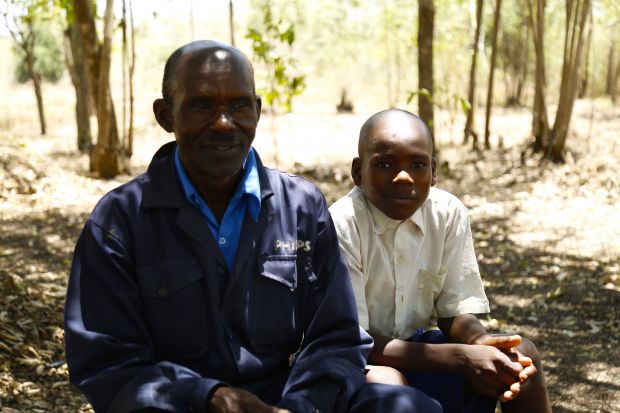 Charles with his son Biron resting in the shade of trees in the farm on a hot day.

“What I like most about planting trees is that once it grows, you can sell it and get cash that can help the family.”

“I want to study and practice agriculture when I grow up so as to make our community look like a forest.  This will help us receive a lot of rain which we don’t get currently,” he says.