Betty and her father were captured.

“We didn’t have time to grieve for my mother because we were also scared for our lives,” she says. “We were taken with the rest of the abductees.”

As they walked towards Murchison Falls National Park, Betty’s father was asked to carry a big saucepan of meat, one that contained many of his slain goats. It was a common practice for the rebels to slaughter all animals found at home and make the abductees carry the meat.

Betty’s father only carried the meat for a short distance before he got tired.

“It was too heavy, so, he told them he couldn’t move anymore. They thought he was fooling them, so, they started cutting him into pieces, using an axe. All this happened in front of me,” Betty recalls, with a trace of melancholy in her voice.

Betty knew then that she was on her own.

This was just the beginning for Betty. She witnessed more killings, torture, rape and all sorts of atrocities at the hands of the LRA. She says she was lucky that many senior members of the group considered her too young to be on the receiving end of some of these heinous crimes.

“Many girls were raped, forced to be wives and others killed,” she says. “I was still young so some commanders sympathized with me. I only carried luggage and babies on the road. I would get so tired sometimes but we couldn’t complain.”

In April 1995, during the unpopular LRA attack on Atiak Trading Centre in Amuru district, Betty got her opportunity to escape.

“The group attacked Atiak at around 5 in the morning,” she recalls. “As soon as the burning of houses started, I also picked up fire as if I was going to burn. I instead disappeared behind one the houses and ran so fast without stopping.”

Betty ran to the nearest villages looking for help. She was lucky that most people had heard the heavy firing at Atiak earlier that morning.  No one doubted her when she told them she had escaped during the exchange.

“Most times people would get scared and suspicious when a child just pops up. The rebels would use this trick of sending children first as a destruction before staging an ambush. A few people thought this was the case when I showed up, but I explained myself that I had just escaped during the attack in Atiak,” she says.

Betty wasn’t sure of the way home, so she relied on the direction of the sun, and some guidance from the few people she met on the way. When she got home, after two days of walking, the place was unusually quiet. Not a soul was in sight. Her parents had already been buried and the place she once called home now looked like deserted ancient ruins. She decided to move to the city to stay with her sister and also find something to do.

“I was in senior two before all this happened. I couldn’t afford to go back to school, so I moved to Kampala and started living with my sister as I looked for money,” says Betty.

Life after ‘the bush’

Betty started selling local brew to raise money for a vocational training course. After a year of hustling, she managed to do a tailoring and design course. After the course, she got a job with Gulu Support Children Organisation (GUSCO), a community-based organization that worked with World Vision to rehabilitate war returnees and former child soldiers. Her role was to make uniforms for the children who were to be taken back to school.

In 2004, Betty realised that she had a big dream: to transform the lives of women and youths returning from captivity. She left Gusco and started helping a few women who reached out to her for skills training.

“Having seen how women were treated in captivity, I had a sharp pain in my heart. I didn’t want those women to come back with their children and still end up on the street, I wanted them to have something to do for themselves and earn some income,” she says.

Betty started right outside the verandah of her rented house with five girls that she trained free of charge, using her only sewing machine. Her landlord later offered the group an enclosed facility where they would conduct classes.

Their numbers then started to grow.

The group’s income was still very low, yet they needed material to use. Betty mobilized the women to move to different schools looking for contracts to make uniforms. They got a few clients and this helped them to rent a more secure and accommodative place to conduct the trainings.

In 2006, Betty’s big opportunity arrived when she was contracted by World Vision to train over 60 women and girls who had returned from captivity.

“World Vision gave us the start that we so much needed,” she notes. “They came to me because they were sure that having experienced the same like these women, I was the best person to help them overcome. This was a big contribution towards achieving my dream and I thank World Vision for the timely intervention.”

Betty and her group used the money earned from the World Vision contract to buy land where they would later build Gulu War Affected Training Centre.

She further recalls that this was a great year for her because she enjoyed working with her first big intake of students. She made their graduation special by ensuring that everyone got a graduation gown upon graduating.

“This had never happened in Gulu before. They looked so smart as they marched around Gulu town, singing songs of victory and jubilation. The women felt so proud and happy by what they had achieved,” Betty says.

Rose Lalam, 33, was among the 60 women who graduated that year.

“I can never forget that day. Everyone looked at us in wonder. We felt so proud, and I thank World Vision, and Betty, for having helped us realise our potential. Life is better now because of the skills we acquired,” says Rose, a mother of seven, working in Gulu market.

In 2008, Betty’s dream got another boost when South African company Eskom offered to construct a training centre at Betty’s piece of land, acquired a year before. The energy firm constructed classroom blocks, dormitories, a computer laboratory and provided other essential scholastic materials. Betty was the happiest when the facility finally opened in 2010, under the name, Gulu War Affected Training Centre. The mother of one would be the director of the institution.

“It was a dream come true!” she says, with a sense of satisfaction in her voice. She had waited for so long to see hundreds of youths, returnees from the bush, grow into highly skilled young men and women.

Twenty-seven-year-old Stella, a single mother, joined GWATC in 2012 and acquired hair dressing skills. Today she is a mobile hair stylist in Gulu city.

“I was abducted at the age of seven. They killed my uncle right in my face, as he tried to stop them from taking me. I tried going back to school when I returned but terrible memories from the bush would come back whenever I would see children fighting at school,” says Stella. After failing to concentrate at school, Stella sat home for years until 2012 when she joined the training facility. She completed her course and she is now able to look after her only child.

Rashid Opiyo, 20, one of Betty’s current students, says he was abducted at the age of 3. He returned after five years and wasn’t interested in school anymore. He ended up on the streets. A few years back, his father offered to support him to do a course in tailoring at GWATC.

“I now have hope, I know after the training I will be able to make my own money because tailoring is on market and the clients are in big numbers,” he says.

“I have seen a lot of success over the years. Most of our former students now run their own businesses, a few have opened vocational schools and are helping their communities. Some of them are actually doing better than me and I am very proud as a teacher,” says Betty. 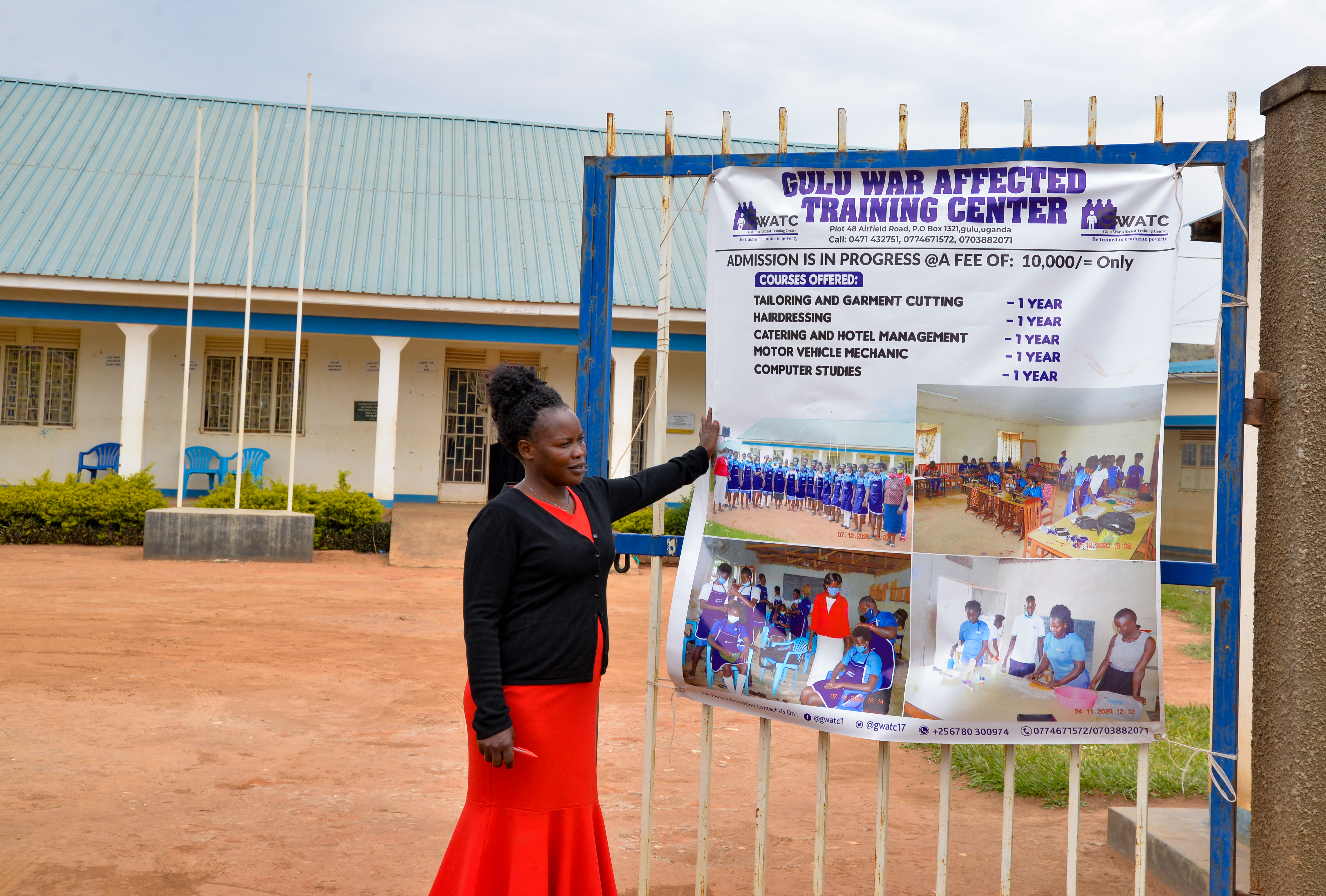 But it hasn’t been a smooth journey

“When we started this, we wanted it to be entirely free, especially for those formerly abducted persons. But with time we realised we needed funds to keep the place running. So, we started asking for a small fee to be able to pay teachers and maintain the institution as well.” She adds that funding has been a big problem, and they have mostly relied on NGOs like World Vision and Comboni Samaritans that support big numbers of trainees.

More work to be done

Betty also notes that the LRA’s destructive era is far from over. She says that contrary to what the world believes, the problems of former abductees and their children are still many, despite the war having ended over a decade ago.

“When we started, we were only looking at the youths who had returned, but a big number of them returned with children and now their children are old enough and ready to go to school. Since there is no support, we have only managed to push a few,” she says

According to Angela Atim Lakor, the Director of Watye ki Gen, a community-based organization that works with World Vision in Gulu, there are 1,175 children born in captivity across the seven districts of Acholi region, in Northern Uganda. Angella, however, believes the actual number of children born of war is more. Most of the children’s fathers are not around, and the children have been rejected by their mothers’ families.

“These innocent children still struggle to find a lineage. They end up homeless and on the streets. This is why we believe that more needs to be done, because the problems of formerly abducted people and their children, born in captivity, are far from over,” Angela says.

The Lord’s Resistance Army was formed in 1987 as part of a rebellion against President Yoweri Museveni. After failing to attract support among his own people, Joseph Kony, the group’s leader, resorted to brutality through widespread abductions and massacres against his own people. According to the UN, over 100,000 people lost their lives and about 60,000 children were abducted, the majority of these, forced into becoming child soldiers and ‘bush wives’.

In 2005, the UPDF, the Uganda government force, working with South Sudan, managed to drive the LRA group out of Uganda and into the jungles of Democratic Republic of Congo. In the same year, the International Criminal Court (ICC) indicted five top leaders of the LRA for war crimes and crimes against humanity. These included Joseph Kony, Dominic Ongwen, Okot Odhiambo, Raska Lakwiya and Vincent Otti.