Moses Jansuk’s story could have been one of battle—fighting with his wife, with his children, with the very land on which he lives. But two years ago, everything changed.

Moses, 39, a South Sudanese refugee living in Mungula 2 refugee settlement in Adjumani district, is a passionate farmer. By 8am, he is cheerful as he leaves his home for his garden about two kilometres away.

Unlike in several countries where refugees live in camps with no access to land for cultivation, in Uganda, refugees instead live in settlements where they are provided with plots of land for settlement and agricultural use to achieve self-reliance. The policy extends to all refugees, regardless of country of origin and if the refugee has the capability to hire extra land for farming, the policy permits him or her to do so.

Hiring land for farming has been Moses’ turning point in life. A man who once lived a despairing life has since cut his teeth in farming. He has not only stamped his name in Mungula as a successful farmer but being able to provide more food has improved his relationship with his wife and children. His is now a happy family.

To get to his garden on time, Moses uses a motorcycle he has acquired through farming. This is proof that he is no ordinary refugee farmer. He is committed, resolute and focused to make his life better through this business.

Indeed, for the past two years, Moses has strived, against all odds, to make his farming business thrive, regardless of the challenges.

Moses, who has been living in the settlement since 2016, is one of the over 215,000 South Sudanese refugees living in Adjumani. The district has the second-largest refugee population in Uganda because of its proximity to South Sudan. Over the years, host communities in Adjumani have welcomed refugees from South Sudan and offered them a safe haven as they heal and rebuild their lives.

The father of five is a beneficiary of the hospitality and peaceful coexistence between refugees and the host community. He has been able to hire four acres of land in the host community at UGX 150,000 (USD 40) per acre annually. Here, Moses practices his massive intercropping.

Last year’s planting season was a success. He harvested four sacks of sorghum, each weighing 100kgs, and a whole acre of cassava. Moses understands the importance of adding value to his produce too.

In the middle of his farm lay peeled and washed cassava tubers, drying under the sun to get rid of excess moisture. Moses says he opted for this process because after the cassava has dried up, he grinds it into fine flour which he sells at a higher price and takes some home for his children to enjoy.

“Getting land for cultivation as a refugee is quite challenging because it is costly to hire a piece of land from the landlords who are nationals,” Moses says.

Most refugees, especially those with no extra land and a source of income, entirely depend on humanitarian assistance. Though life-saving, the food ration from the United Nations World Food Programme is not enough, and this has forced many to return to South Sudan.

“The land is always leased out for a year but one can agree with their landlord to pay in instalments or when you harvest, you give him part of the produce,” Moses says. His passion to explore farming opportunities has enabled him find a niche in vegetable growing as well. Moses' farm is next to a small swamp which surprisingly never gets dry, even during the dry season.

“Vegetable growing in my area gives more money compared to other business ventures. When I realised that there were no local vegetable producers, I gave it a try because I was self-confident of the availability of water supply even in the dry season,” Moses says. “People in other districts are the ones supplying vegetables to Adjumani including the refugee community. I want to change the norm. I have planted tomatoes, onions, cabbage and okra for the start because I want my children also have access to nutritious foods”.

Through farming, Moses’ family has been able to get enough food to supplement the monthly rations and have full access to nutritious foods, a thing that wasn’t possible as they entirely depended on the monthly food ration.

According to Moses’ daughter, 12-year-old Consy, the family now has access to a variety of food. “Before dad started farming,” she says, “food was not always enough to sustain us a whole month and we never liked the food distributed because it was always the same food. I am now happy that we have plenty of food.”

Food has become more special to Moses' family now. “My favourite dish is meat and rice. I also like fish, cassava and sweet potatoes. Whenever we want to eat something special, we tell dad and he buys it for us”, adds Consy.

Moses is self-reliant because of his participation in World Vision's livelihoods and financial inclusion trainings which have been a truing point in his life. “World Vision has made me self-reliant and economically empowered. In order to keep my farming business afloat, I joined a savings group to access quick loans for business continuity,” he says.

The project has brought peace and harmony in Moses’ home as well. Moses remorsefully reveals how he used to batter his wife every time she asked him for home necessities. This is a common practice by men who fail to provide for their families. "Before joining the project, life was hard. I hardly met the needs of my family. Every time my wife asked me for basic needs, I resorted to violence. Squabbling and fighting almost every day was the order of the day. My relationship with my children was at its worst. I never had time for them,” he confesses.

Jane Lurt, Moses’ wife, says that her husband’s harsh treatment towards her almost forced her to leave the home, but her unconditional love for her children kept her around. “Our biggest challenge was food,” she says. “The food ration that we depended on was never enough to sustain us throughout the entire month. My children would always cry whenever they were hungry. I started begging for food from neighbours. Sometimes I would also do casual work in the community to earn some money and feed my children.”

The project implementation has since rekindled the couple's love life.

“I am very grateful for the support from World Vision because we now have enough food and my husband’s behaviour changed. From the business proceeds, my husband has started for me a small retail business. I sell vegetables, silver fish and simsim in our village market. We are a happy family now,” Jane adds.

Moses is among the 45,000 people in Adjumani supported by World Vision in partnership with Mountain Blue Farms through livelihoods and peaceful coexistence programmes. More than 40% of the people supported are children. 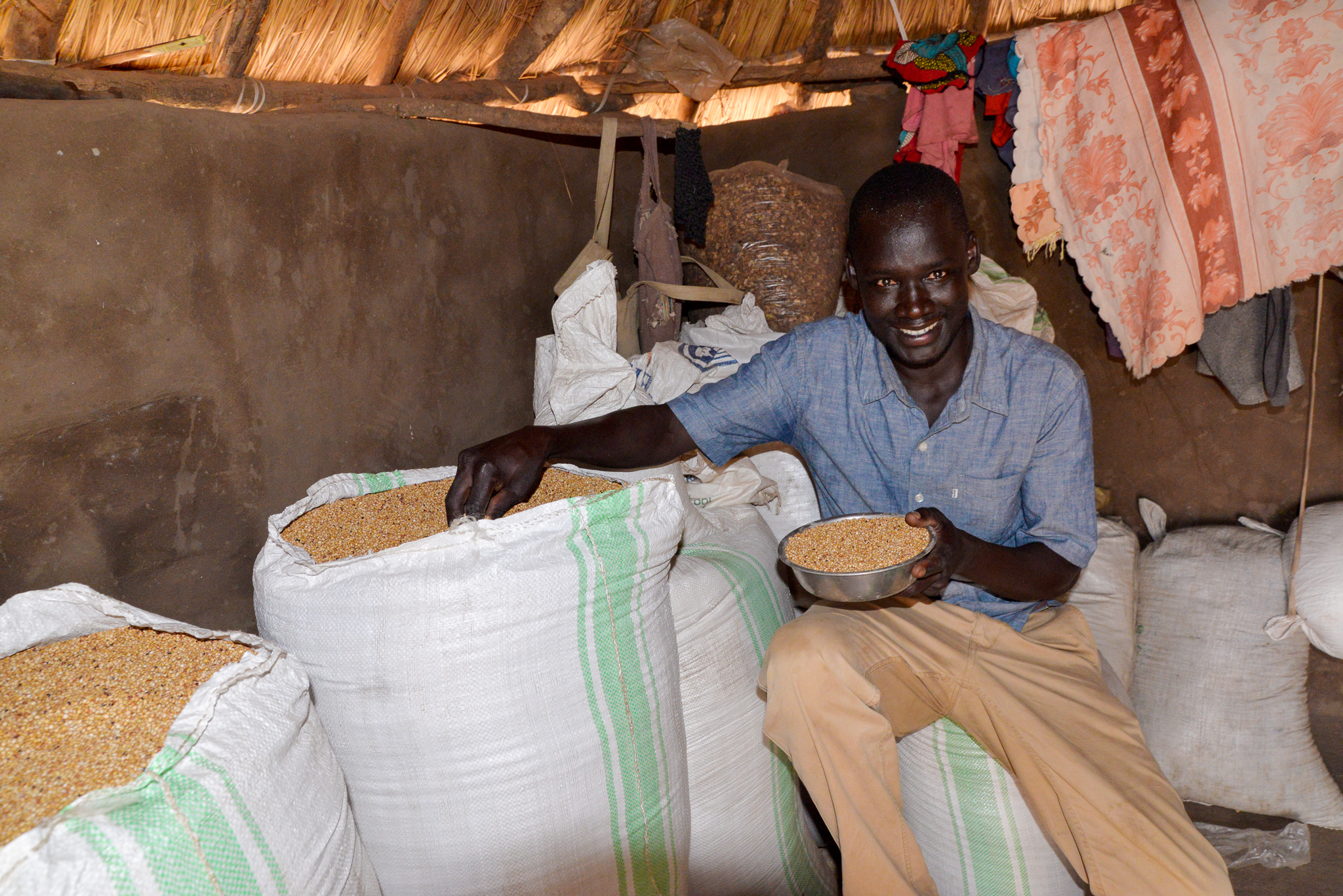 Moses hopes to become the sole supplier of fresh vegetables among the refugee and neighbouring host communities.

He envisages a better life for his family especially his children. “I want to send my children to the best schools as a way of building a firm foundation for their future. They belong to a generation that will change the current situation in South Sudan,” he says.