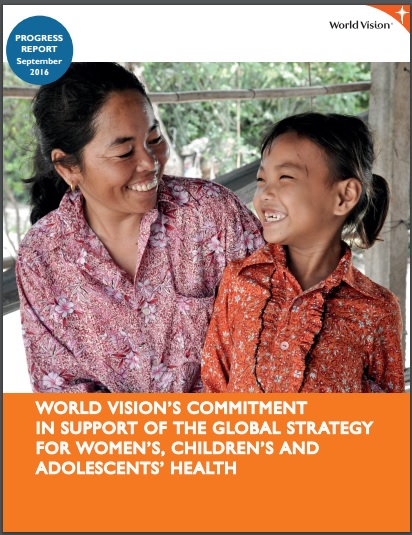 After exceeding its 2010 $1.5bn commitment to the Every Woman Every Child movement, World Vision's 2015 commitments include doubling its investment to $3bn and mobilising a million faith leaders to save women and children from preventable health-related deaths. Read the media release here

Partnership is at the heart of everything World Vision does: partnership with communities where we work, with our donors, with corporations, with governments, other charities, faith communities and more. So, in 2010, when World Vision was offered an invitation to join a global partnership working to improve the health of women and children worldwide we gladly accepted.

The UN Secretary General Ban Ki-Moon's Every Woman Every Child initiative is described as "an unprecedented global movement that mobilizes and intensifies international and national action by governments, multilaterals, the private sector and civil society to address the major health challenges facing women and children around the world."

His 2010 call for everyone to make concrete commitments to improve the health of women and children caused all kinds of groups, companies and organisations to respond. Five years on, Every Woman Every Child is credited with having played a major part in saving 2.4 million women and children from preventable deaths.

A major investment for child health

It is World Vision's belief that no child should have to suffer preventable illnesses and diseases, that every boy or girl should be able to survive and thrive. This made us exceed, by $500 million, our 2010 commitment to invest $1.5 billion over five years in our programmes to improve the health of women, newborns, children and adolescents.

The impact of this investment was significant. You can read more about how that money was invested here (in the 2015 Report.  The 2016 Report is available HERE.) along with information on how we also mobilised more than 20 million supporters in communities in 70 countries to speak up for child health, influencing governments to change policy on health and nutrition in the publications.

Another chance to save lives

The Every Child Every Woman movement has now launched its second global strategy (2016-2020), and has, once again, invited major commitments from a variety of actors. World Vision has responded by doubling its 2010 financial commitment and partnering with other organisations and agencies to do everything it can to ensure women and children everywhere experience good health.

Read the announcements about our 3bn investment here, and about our partnership with the Faith Alliance for Health here. Or get an overview of World Vision's commitments in the infographic below.

World Vision's commitments to Every Women Every Child Global Strategy 2.0