Seventeen-year-old Annie (not her real name) is a jovial teenager who loves school and would like to be a nurse in the future. Her pursuit for happiness and a better tomorrow became more profound when she resumed school early this year, after being home for close to two years.

The long break from school was partly due to closures imposed by the government during the COVID-19 pandemic, as well as an unprecedented pregnancy that Annie had to grapple with.

"When we were out of school as a result of the pandemic, I got involved in a relationship with a man. We were in love and decided to sleep together to strengthen our relationship. After a few months, I discovered that I was pregnant and this news shocked me," she says, at her home in Kapenguria, situated in West Pokot County, Kenya. 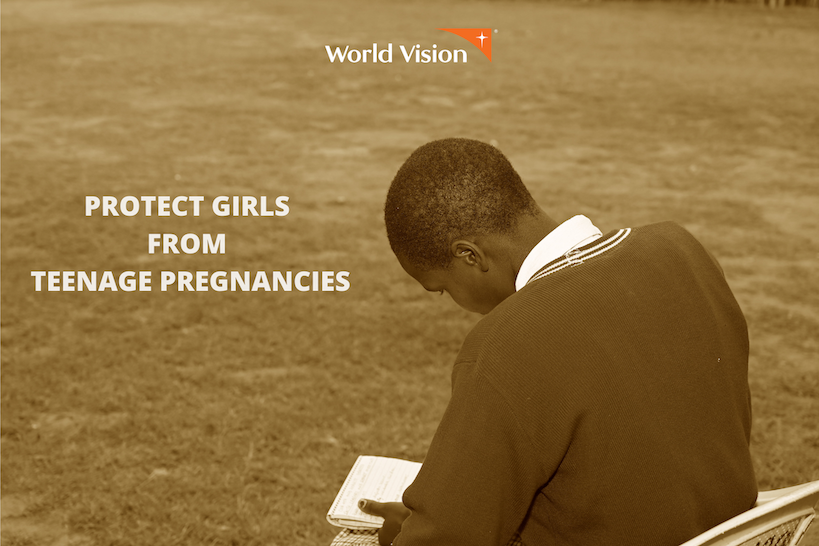 "It was my first time so I didn't think I would get pregnant. I was scared and did not know how to approach my mother. I believed I had let her down and dreaded seeing the look of disappointment on her face," states Annie.

With no one else to turn to, she decided to run away from home and seek refuge at a friend's house.

"This was a very dark and stressful period in my life. I was ashamed of myself and would cry the whole day. I believed that I had completely ruined my life because of the pregnancy. The dream of completing school and getting my desired career in nursing seemed impossible. I felt like I was destined to be a failure in life," notes Annie.

Her plight eventually reached one of the pastors at her local church who intervened in the matter and acted as a mediator between Annie and her mother, to help tackle the matter.

Annie is not alone. Her home county of West Pokot has one of the highest cases of teenage pregnancies in Kenya. Government statistics from the Kenya Demographic and Health Survey indicate that the percentage of women aged between 15 and 19 years that have begun child bearing in the region is about 29 percent, against the national average of 18 percent.

The high cases are linked to low awareness levels on sexual and reproductive health matters among adolescents and young people, as well as retrogressive cultural practices like Female Genital Mutilation (FGM) and child marriage that are rampant in West Pokot.

Due to the influence that religious leaders have in the Pokot community, World Vision sought to involve them in the rollout of interventions aimed at curbing the challenge. This was done in collaboration with Deutsche Stiftung Weltbevölkerung (DSW), as well as the Faith to Action Network (F2AN), through a GIZ-funded project known as Working Together for Children and Young Adolescents in Kenya.

"Pregnancy happening at a young age, during adolescence, has adverse effects on affected girls or young women. This is why it is important to find ways of preventing these cases and offering support to those already pregnant," notes Lilian Chebon, Programme Health Officer at World Vision in Kenya.

Indeed, the World Health Organisation (WHO) indicates that pregnancy during adolescence is associated with a high risk of maternal and child deaths, as well as sexually transmitted infections like HIV and mental disorders such as depression.

Pregnant adolescents also face negative social consequences that lead to them leaving school, which reduce their employability, leading to long-term economic implications that undermine their future.

In preparation for the task ahead of them, World Vision first built the capacity of the selected religious leaders by furnishing them with factual knowledge on Adolescent Sexual and Reproductive Health (ASRH) matters.

The faith leaders were also taken through World Vision's Channels of Hope model that empowers faith leaders to respond to health challenges facing communities in a compassionate and practical manner, by integrating science-based information with insights from religious texts or scriptures.

"This training is important as it equips faith leaders with the necessary skills, information and expertise that enables them to become effective health advocates and agents of change in the community,” states Adrian Arupe, the Channels of Hope Community Mobiliser for World Vision’s Working Together for Children and Young Adolescents Project in West Pokot County, Kenya.

He notes that the impact of the training was immense and went a long way in changing the mindsets of faith leaders that participated in it.

"As pastors, we used to think that our work is to recite Bible verses and point out what is right or wrong, so as to save souls. Because of this approach, we feel that we have let down many young people. They feel that the church is out of touch with life challenges they face on a daily basis. They also feel judged and usually stop coming to church when they do something that they consider as sinful," says Pastor Peninah Maruk of the Africa Inland Church (AIC) in Kapenguria, West Pokot County.

"For me, I have learnt that prayer alone cannot be our prescribed solution to all problems that young people are facing. We need to grow them spiritually, while also equipping them with factual knowledge and life skills that prepare them to deal effectively with challenges that come their way. We also need to show them love and not condemn them when they do something wrong. No one is perfect. We all make mistakes. But we can learn from them and become better," notes Paul Kamarich, a faith leader at the Kapenguria Full Gospel Church in West Pokot County

After the Channels of Hope training and capacity building sessions, many faith leaders were inspired to come up with strategic ways of engaging young people in their churches so as to offer them a meaningful support system.

Consequently, they established youth mentorship forums in their churches. Here, adolescents and the young people are taken through lessons that are geared towards nurturing their spirituality and enhancing their knowledge on sexual and reproductive health.

The topics covered include the following: healthy adolescent growth and development, benefits of primary or secondary abstinence, factors to consider when choosing contraceptives as well as the significance of birth spacing and birth control.

The faith leaders also sensitise the young people on diseases such as Sexually Transmitted Infections (STIs), HIV&AIDS and cervical cancer. They are also taught about preventing Sexual and Gender-Based Violence (SGBV) as well as avoidance of retrogressive cultural practices like Female Genital Mutilation (FGM), child marriage and child labour.

Beyond the youth and adolescents, the faith leaders have also been instrumental in guiding parents on how to engage with their children and help them to navigate life challenges well.

"We are always there to intervene and act as mediators in cases where parents have chased away their pregnant teenagers or where girls run away from home because they are too afraid to reveal that they are pregnant. The stigma against these girls should be discouraged as it does more harm than good," says Pastor Paul, who intervened in Annie’s case and ensured that she got the recommended care and support.

Pastor Paul notes that with teenage pregnancies, counselling is important as it helps the affected girls to come to terms with their condition and avert mental health problems that can lead to suicide, drug abuse as well as other destructive behaviours.

Since adolescent mothers and their children have a greater risk of developing medical complications, it is also important that pregnant teenagers are supported to attend Antenatal Care (ANC) clinics or medical check-ups early enough, at recommended health facilities near them.

This helps in preventing maternal and child birth complications that can be life threatening to both the mother and the child. The adolescent mother is also able to get guidance on recommended healthy behaviours to adhere to, during pregnancy and once the baby is born. She will learn about good nutrition, immunisation, breastfeeding, among other important health information.

"Getting pregnant is not the end of life. We need to give affected girls hope and support them to continue with their education so they can have a bright future. This is something that my church and others are pushing for, to help children attain their potential in life," notes Pastor Maruk Jackson of the Kapenguria African Inland Church in West Pokot.

The youth mentorship programmes run by churches are also inspiring many teenage boys and girls to become Adolescent Sexual and Reproductive Health champions in their schools and communities.

"Because of peer pressure, many of us are pushed to engage in sex and we do so without knowledge on the consequences. Now we know better, thanks to the information that we have been getting from our pastors. I have decided to become an advocate for abstinence in my school, because of its benefits," says Thomas, a high school pupil at Kapenguria in West Pokot County.

Annie is eternally grateful for the support that she received from her pastor.

"He calmed my mother down and made her to be more loving, compassionate and understanding towards me. My mum has been very supportive. She takes good care of my baby while I am in school and motivates me every day to work hard and excel in my studies as this will benefit me and my child too,” she says.

Annie is also using her experience to rally girls in her school and neighbourhood to avoid engaging in risky sexual behaviours. She is also educating them on their sexual and reproductive health rights.

"I would not like anyone to go through this experience. Even though I am coping, it is not easy to be a teenage mum. My advice to young people is that they should concentrate on their studies and wait to have babies in future, when they are adults and mature enough to handle pregnancy and to take good care of their children," she says.

Thanks to the active involvement of churches and faith leaders on adolescent sexual and reproductive health matters, families are hopeful that cases of teenage pregnancy will go down in West Pokot County.